As American singer Pharrell Williams and multinational sportswear corporation Adidas had been ignoring to rename their collaboratively launched Holi footwear and apologize, upset Hindus may plan to urge various retailers not to carry their Holi shoes. 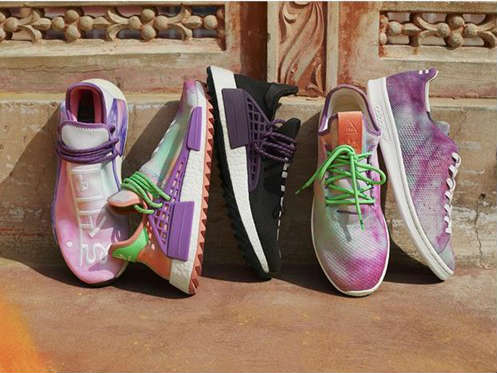 Distinguished Hindu statesman Rajan Zed, in a statement in Nevada (USA) today, said that if Adidas and Pharrell Williams continued to cold-shoulder the concerns of Hindu community, they might plan to urge Macy’s, Amazon, Kohl’s, Nordstrom, JCPenney, Foot Locker, Neiman Marcus, Urban Outfitters, Bloomingdale’s, DSW, and others to refuse to carry their Holi shoes; thus showing respect to the hurt feelings of the community.

Zed, who is President of Universal Society of Hinduism, pointed out that Hindus felt that Holi footwear, fabricated by Pharrell Williams and Adidas, was trivialization of traditions-concepts-symbols- beliefs of Hinduism.

Rajan Zed further said that despite their publicly expressed feelings, Pharrell Williams and Adidas did not care to rename their Holi shoes which many Hindus felt were highly insensitive as religious festival of Holi was linked to various deities; and offer formal apology.

Instead, Adidas, in an email to Zed, insisted that these were created by Adidas and Pharrell Williams to “inspire positive change”, were founded upon “the principles of unity” and “with an intention to explore humanity”.

Did trivializing others deeply held faith, manipulating it and treating its concepts frivolously for making a fashion statement and aiming at mercantile greed was Pharrell-Adidas way to “explore humanity”,  “inspire positive change” and “unite” the world? Rajan Zed asked.

Zed urged Pharrell Williams and Adidas CEO Kasper Rorsted to relook into the issue calmly, leaving aside their unnecessary stubbornness, remove the name Holi from their shoes (some of which contained leather) and offer apology to the Hindu community to display that they really cared.

Rajan Zed suggested that Pharrell Williams, Adidas and other companies should send their senior executives for training in religious and cultural sensitivity so that they had an understanding of the feelings of customers and communities when introducing new products or launching advertising campaigns.

Hinduism was the oldest and third largest religion of the world with about 1.1 billion adherents and a rich philosophical thought and it should not be taken frivolously. Symbols of any faith, larger or smaller, should not be mishandled, Zed noted.

Inappropriate usage of Hinduism concepts or symbols or imagery for commercial or other agenda was not okay as it might be painful to many devotees. Hindus were for free artistic expression and speech as much as anybody else if not more. But faith was something sacred and attempts at trivializing it hurt many followers, Rajan Zed added.

Twelve Holi shoes, ranging between $95 and $250, appeared on Adidas website; five of which were “coming soon”, six were “new” and one was “sold out”. General release date was March 16, while pre-release was on March two. Adidas stated: “inspired by a Hindu festival, artist Pharrell Williams designs these shoes”. Adidas described Holi as ancient spiritual festival.

Joie de vivre festival of Holi welcomes the beginning of spring and starts about ten days before the full moon of Phalguna. The ceremonies include the lighting of the bonfires, during which all evils are symbolically burnt. Holi also commemorates the frolics of youthful Lord Krishna; celebrates the death of demoness Putana, burning of demoness Holika, and destruction of Kama by Shiva. Holi fell on March two this year.

Adidas, headquartered in Herzogenaurach (Germany) and whose history goes back to 1924, claims to “produce more than 850 million product units every year”. “Creating the New” is its 2020 strategy. Adidas—Pharrell Williams collaboration is said to be in its fourth year.