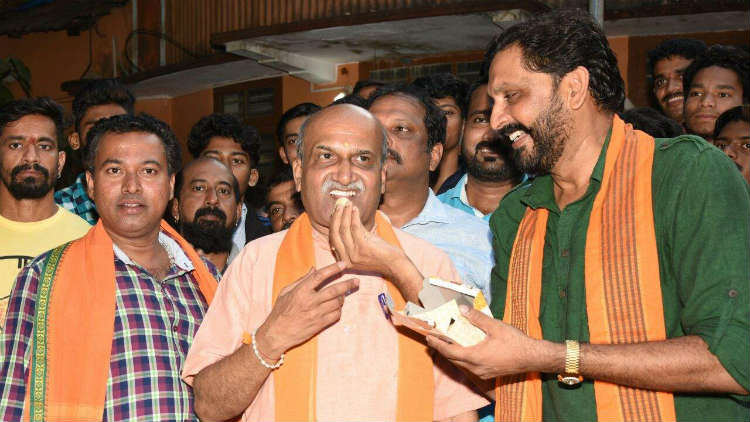 Mangaluru : A good nine years after the incident threw then Hindu organisation — Sri Ram Sene — into national limelight and brought infamy to the coastal city, the third JMFC court on Monday acquitted its cadre, including its chief Pramod Muthalik, accused in the Amnesia Pub attack case.

The judgment provided relief to 25 Sri Ram Sene activists whose act on January 24, 2009, saw the coastal city being viewed with a sense of apprehension world over.

Justice Manjunath, the judge, acquitted 25 of the 30 accused, including Muthalik, for lack of evidence in the attack. While two of the remaining five accused are dead, trial is pending against the other three who left the country.

“This (the judgment) is a victory of the truth,” a triumphant Muthalik said even as he apologised on behalf of the men on ground for carrying out the brazen attack on women.

Muthalik was exterminated from the district for a year after the attack. Almost two years after the incident, the saffron outfit leader had referred to it as a big mistake and a public relations disaster.

However, on Monday, he defended the intention of the Sene activists, saying the outfit could not and shall not tolerate the youths of the country resorting to “wine culture”.

Muthalik said he is considering slapping defamation cases against the Congress, which was at the helm at the Centre, and the BJP, which was holding office in the state, during the incident for maligning his image and giving him “mental, physical and financial” trouble and torture.

Muthalik reiterated his question to the BJP as to how could he be booked when he was not even present at the venue of the attack. According to Muthalik, he was at a convention from January 23-25 in Pune and the police arrested him at the airport in Belagavi on his return on January 26. He was lodged in jail for 16 days. “Once I obtain the order copy of the court, I will discuss with my lawyer on how to take this forward. I am considering slapping defamation cases against the governments,” he said.

The 30 accused were booked on charges of criminal trespassing, assault on women, rioting inside the premises and criminal conspiracy among other sections of the IPC. Some of the key accused were: Suresh Padil, Subhash Padil, Prasad Attavar, Sharath Padavinangady, Jeevan Neermarga, Vinod Neermarga, Devraj Neermarga, Rohith Adyar, Pawan Manjeshwar, Dheeraj Manjeshwar, Ganesh Attavar and Sachin Attavar.

Advocate Asha Nayak and Vinod argued on behalf of the accused.

Allegedly the activists of Sri Ram Sena entered the Amnesia-The Lounge on Dr Shivaram Karanth Road and threatened the women sitting inside. The men, who took objection to women drinking alcohol, pushed them outside, many women falling to the ground while they were being driven out.