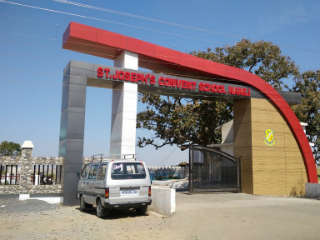 Ratlam : Hindutva groups staged a bandh and protested on the streets in Namli town of Ratlam district in Madhya Pradesh on Monday against the alleged expulsion of 20 students from a school over chanting of Bharat Mata slogan a few days ago.

St Joseph Convent School has, however, declined accusations from the Hindutva groups. (It seems that now school authorities might be denying accusations due to protests by Hindu groups. If we see past incidents, there has been occurrences of punishments to students for following Hindu Dharma (e.g. applying tilak,

On Monday the saffron groups reached police station with the affected students and demanded a case to be registered against the school. They also took out a rally before holding public meeting on the issue.

Hindutva groups are alleging that the students were ousted from the school just because they chanted Bharat Mata ki jai. Meanwhile, the administration, sensing trouble, has called in for heavy police deployment.

Seeing the students disrespecting Vande Matram, the teacher present on the occasion asked the kids to behave and warned them of stringent action if they did not stop, Stephen added.

He further clarified that students were neither debarred from the school nor prevented from taking the exam as reported by a section of the media.

“Whatever happened at the school was pre-planned,” he said.

Superintendent of Police, Ratlam, Amit Singh said that prima facie it did not seem that students were subjected to any undue treatment. Senior officers though are probing the incident.