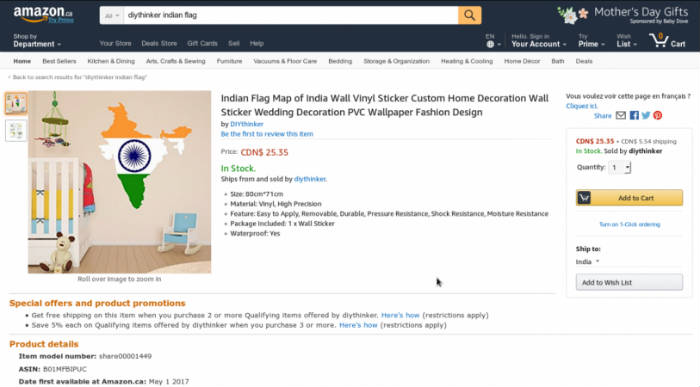 New Delhi : E-commerce portal Amazon Canada has put up for sale a wrong Indian map with parts of Jammu and Kashmir missing, and the issue came to light when BJP leader Tajinder Pal S Bagga posted a link on Twitter.

This is the second time Amazon has ruffled feathers in India. Earlier, doormats having the Indian tri-colour were sold on the site, sparking protests in India.

The product description on the site shows a vinyl wall sticker with the wrong map of India being sold by the company.

Bagga took to Twitter to highlight the issue, demanding an immediate removal of the controversial product by Amazon.

In January this year, External Affairs Minister Sushma Swaraj had reprimanded Amazon for the sale of doormats with the Indian flag printed on them.

She had threatened of revoking visas of the Amazon officials.

However, it seems Amazon has not learned from its mistakes and seemed to have invited another controversy.