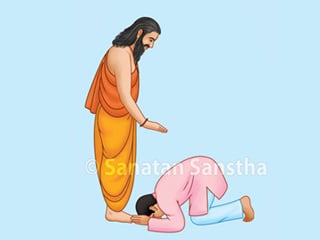 God is the creator of the universe. We too are a part and parcel of the universe. So both, the universe and we were created by God. All events in the universe followed thereafter. These include me, my happiness and unhappiness, intellect, actions, my family, country, religion, spiritual practice, etc. Thus whenever one thinks about the self and / or the world, unconsciously harbouring awareness of God or one of His forms and offering the credit for even this awareness to God, is termed as gratitude. Prayer is actually a synonym for surrender. This act of surrender is completed only after the expression of gratitude. The Guru Himself is God for a seeker who has been blessed by the grace of a Guru or for one who is practising Spirituality according to the Path of the Guru’s Grace (Gurukrupayoga). Hence it is but natural for him to harbour more gratitude towards the Guru.

A. Gratitude about the Guru being one’s everything: Dr. Hemant Kamat, a seeker expressed his gratitude unto the Guru thus,

B. Gratitude towards God for every breath of life and the Guru for teaching how to repeat (chant) The Lord’s Name: I was trying to repeat (chant) The Lord’s Name along with the breath. After sometime due to intense concentration on the Name, I could hear the repetition (chanting) of The Lord’s Name through Lord Krushna’s peacock feather. I could feel the Name entering me through the nose, every time I took a breath. The gratitude to God for every breath and to the Guru for teaching me the act of repeating (chanting) The Lord’s Name which I expressed was beyond verbal description. However the Bliss (Anand) derived from the spiritual experience lasted for a long time. – Mrs. Puja Ganesh Naik

C. Sometimes seekers have to set out at dawn when travelling out of station. Someone has to wake up at dawn to give them lunch packets. When I do this task, I feel thankful to both, the seekers and the Guru for having endowed me with this opportunity to prepare the holy sacrament (prasad) of the Guru. I feel, ‘How much my Guru does for me so that my spiritual love (priti) for others grows and I progress spiritually !’ – A seeker, Goa

D. When despite my not making a mistake another seeker points out my mistake, I feel thankful to the Guru as He is doing all this only to take me to the next level of spiritual progress. Thereafter I am unaffected about that incident. – A seeker, Goa

A. Feeling thankful towards seekers and perceiving that I was offering the guidance at their feet: On 24th October 2002, I was scheduled to guide the prominent seekers from Sangli district and those rendering service in the office of the ‘Daily Sanatan Prabhat’. I offered salutation unto the Guru before looking at the audience. At that moment, I experienced an inner feeling of gratitude towards the seekers. There was a lump in my throat. I was speechless. I was overwhelmed with the thought that I had been endowed with the opportunity to serve the Guru because of them. Thereafter throughout the discourse, I experienced the feeling that I was offering the guidance at their feet. Ever since, even during casual conversation with a seeker, I become aware that I am serving him. – Dr. (Mrs.) Nandini Durgesh Samant

2. Repeating (chanting) the Name of The Lord

2.1 Importance of repeating (chanting) The Lord’s Name with spiritual emotion

2.2 Efforts to repeat (chant) The Lord’s Name with spiritual emotion

2.3 Spiritual experience of repeating (chanting) The Lord’s Name along with spiritual emotion

The aim of a seeker following the Path of Devotion (Bhaktimarg) is to generate intense devotion unto The Lord. To achieve this, it is beneficial to put into practice the various types of the nine-fold devotion namely, listening to praise of The Lord (shravan), singing praises of The Lord (kirtan), remembering The Lord (smaran), service of the holy feet (padsevan), offering (archan), offering obeisance (vandan), devotion as a servant (dasya), devotion as a friend (sakhya) and narrating everything to God (atmanivedan). Among these, the first three types help to generate faith, the next three are related to the manifest (sagun) form of The Lord and the last three are internal spiritual emotions.

3.1 Types of the nine-fold devotion

C. Remembering The Lord (smaran): Constant contemplation upon the Name – virtues – divine play (lila) of The Lord and remaining engrossed in them is this type of devotion. This includes constant remembrance of the gross form of the Guru or God through a picture / idol and that of His subtle form through repetition (chanting) of The Lord’s Name. If one harbours the spiritual emotion that every breath one takes, every task that one has done throughout the day has been possible only because of The Lord or that one is living every second only because of The Lord then one will remember Him throughout the day. This is the true expression of this devotional form. Kunti from the Mahabharat had asked for unhappiness so that she would remember The Lord all day long. However without asking for unhappiness if one makes attempts as above then this devotion will develop quickly.

A seeker who remembered the Guru constantly and attributed everything to the Guru experienced oneness with the Guru as described below.

A seeker perceiving the seat she used to undertake repetition (chanting) of The Lord’s Name as that of her Guru and also experiencing closeness to Him through the subtle dimension : On 6th July 2002 before meditating, I prayed unto Gurudev and then sat with hands folded in obeisance. The thought that crossed my mind then was, ‘Your seat has become soiled. It will have to be washed at night.’ Just then, I realised that the seat belonged to my Guru and that it is He who uses it everyday and that He would certainly not appreciate my washing it at night (because Gurudev would tell us not to do too many chores at night). The next vision I got was of a sage walking in a forest. I felt as if He was my Guru and I, His disciple. Though in reality, the Guru’s gross form is far away, yet from within He is very close to me. – Miss Mahananda Giridhar Patil

D. Service of the holy feet (padsevan): In this form of service, one literally serves the holy feet of The Lord or performs ritualistic worship of His feet. Service unto the Guru’s feet means harbouring the spiritual emotion, ‘I am a servitor of The Lord’. A Guru has greater attachment for a disciple who worships His subtle form, that is the Guru principle than one who worships only His gross form. Propagation of the Guru’s mission in the best possible way is true service unto the Guru’s feet.

E. Offering (archan): Ritualistic worship (puja) of The Lord with devotion and respect is called archan. Installing a picture of the Guru in the temple at home or worshipping Him mentally are incorporated in this kind of devotion.

F. Offering obeisance (vandan): This form of devotion constitutes meditating upon The Lord after completely surrendering unto Him. This includes praying with spiritual emotion, so that it reaches God.

G. Devotion as a servant (dasya): In this form of devotion, the devotee considers The Lord to be his father, mother and his everything and he himself to be The Lord’s son or servant. Lord Maruti is an excellent example of this type of devotion.

H. Devotion as a friend (sakhya): In this form of devotion, a devotee believes God to be his friend or sibling who shares his happiness and unhappiness. So, no barrier of any kind exists between the two. As spiritual emotion towards the Guru grows, there is a corresponding growth of respect and gratitude for Him. This makes it difficult to view Him as a friend. Only a rare seeker with a spiritual level of more than 60% is capable of remaining devoted in this way. Devotion of Arjun towards Lord Krushna is an unparalleled example of this.

I. Narrating everything to God (atmanivedan): This devotion is the ultimate and supreme step in the Path of Devotion. Here, the devotee explicitly narrates everything good or bad, external or internal to The Lord and surrenders completely unto Him. One should narrate daily to the Guru about everything, all of one’s actions, obstacles faced in one’s spiritual practice, doubts in the mind, etc. Mrs. Mangala Marathe (one of the compilers) experienced the following in this context – ‘One day when I was conversing withGurudev in my mind, two seekers who were meditating saw me talking to Him on telephone.’

3.2 Comparative importance of the nine-fold devotion