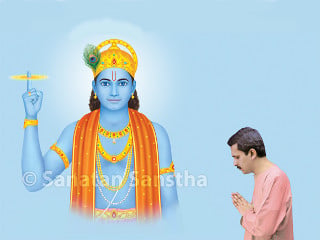 Saint Tukaram Maharaj says in one of His hymns, “A devotee’s duty is to have singular bhav towards God. The true secret of devotion is to have this bhav with a firm resolve constantly. Devotees should have firm faith in God, without expecting anything in return. They should not wish for the support of anyone else. God should be their sole support.” Saint Tukaram says that He has not heard of a devotee who has such a bhav and has been ignored by God.

The main obstacles in awakening of bhav are ignorance, doership, ego and personality defects.

Ignorance is related to the form and qualities of God and His mode of functioning.

Doership pertains to the feeling that different incidents in life occur due to someone else or oneself and not due to God.

Ego is the feeling that ‘I am distinct from God’; this is the greatest obstacle in awakening of bhav. The more the ego, the less are the chances of developing bhav.

Defects in personality also prove to be an obstacle in awakening of bhav. Sometimes, benevolent subtle energies from the Bhuvalok (Nether region) who help seekers, project thoughts about bhav or sattvik (Sattva-predominant) thoughts, but they cannot be imbibed due to excessive defects in personality. Once these obstacles are destroyed in the true sense of the term, the others can be overcome quite easily. Efforts made to overcome these obstacles stepwise are attempts to awaken bhav.

2. Stages in the efforts made to awaken bhav

2 A. Bhav-nirmiti (Generation of bhav)

Generation of bhav in a seeker lacking in it is next to impossible and can occur only with the grace of the Guru.

2 B. Bhavjagruti (Awakening of bhav)

This is the process of awakening the dormant bhav within a seeker.

These are attempts made to enhance the existing bhav.

3. Various actions to awaken bhav in an individual

To awaken bhav rapidly, initially one needs to make constant efforts at the level of the mind and intellect. Various actions in this context are given here. 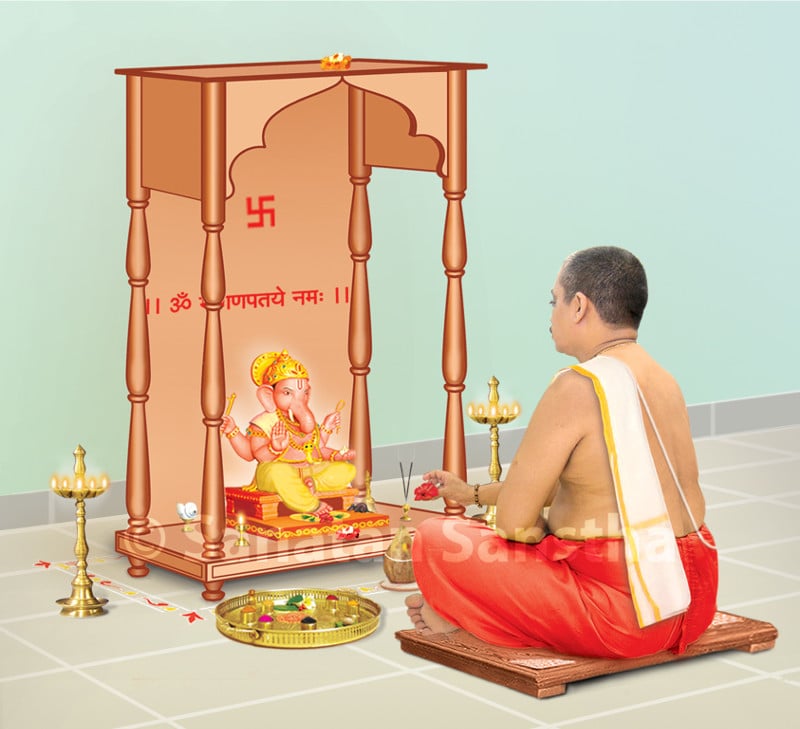 To develop bhav towards a particular Deity, first one has to develop love for that Deity. Worship of its Sagunn (with attributes) form by performing ritualistic worship, singing hymns, etc. helps develop love for the Deity faster than chanting, that is worship of its Nirgun (without attributes) form. That is precisely why ritualistic worship, singing Arati before a Deity, etc. are beneficial for awakening of bhav in the initial stages. Recitation of verses and hymns are means of glorifying a Deity. Since God likes to be praised and is compassionate, if hymns and verses are sung with bhav, He is appeased. 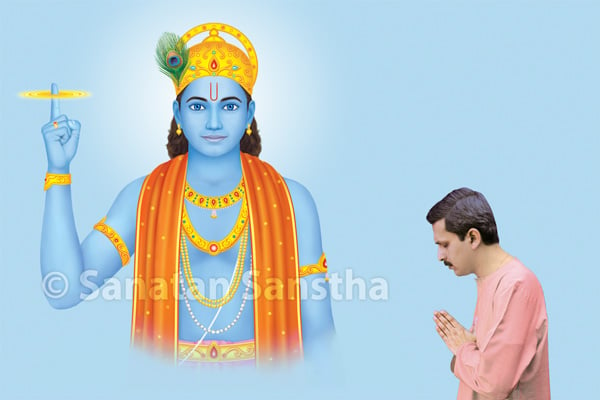 The word ‘prarthana’ is derived from two words ‘pra’ and ‘artha’, meaning pleading fervently. In other words, it is asking God for something with intense yearning. Prayer includes respect, love, pleading and faith. Through a prayer, a devotee expresses his helplessness and offers the doership of the task to God.

3 B 2. Benefits accrued at the level of action, thought and attitude

In the former, the one praying remains extroverted; while in the latter, one becomes introverted. A prayer with expectations is inferior, while that made without expectations is superior.

Vyashti (individual) prayer is one which is made to augment one’s individual sadhana (Spiritual practice). Initially a seeker should make this kind of a prayer. Once the prayer occurs with bhav, the seeker can do samashti (society) prayer for other seekers and the society at large, for example for Dharmaprasar (propagation of Dharma). This prayer is for the sake of society. Such a prayer inculcates pervasiveness in a seeker. He begins to feel love for others and his samashti sadhana is enhanced.

God is the creator of the Universe. We too are a part of the Universe. Therefore, both, the Universe and we were created because of God. All events in the Universe followed thereafter. These include me, my happiness and unhappiness, intellect, actions, my family, country, religion, sadhana, etc. Thus, whenever one thinks about the self and / or the world, unconsciously having awareness of God or one of His forms and offering the credit for even this awareness to God, is termed as gratitude. Prayer is actually a synonym for surrender. This act of surrender is complete only after expressing gratitude. The Guru Himself is God for a seeker who is blessed by the grace of a Guru, or for one who is practicing Spirituality according to Gurukrupayoga. Hence, it is natural for him to have more gratitude towards the Guru. 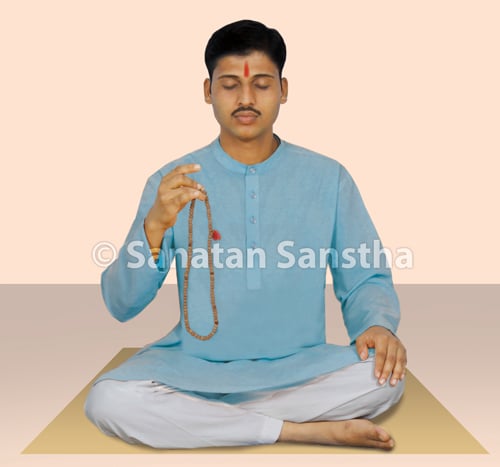 According to the Path of Devotion, this is the very foundation of sadhana. God’s Name is God Himself. That is why, the easiest mode of being in constant communion with God is to chant continuously. One may get the impression that one develops bhav for God by being in constant communion with Him through the chanting of His Name. Often however, chanting occurs just for its sake, without spiritual love for God. This kind of chanting does not help much in developing bhav for God. That is just why, chanting should be done with bhav.

3 D 1. Importance of chanting with bhav

The aim of a seeker following the Bhaktimarg (Path of Devotion) is to generate intense devotion unto God. To achieve this, it is beneficial to put into practice various types of Navavidha Bhakti namely,

Among these, the first three types help generate faith, the next three are associated with the Sagunn form of God and the last three are internal bhavs.

To awaken progressive bhav for God or the Guru through the medium of seva, one has to make efforts on the following three planes – Action, Thought and Attitude

Every action can be performed in the following four ways –

This is the inspiration behind an act; for example, if thoughts are sattvik, then the actions resulting from them are sattvik too.

Trying constantly through action and thinking of rendering seva with bhav gradually makes seva possible with bhav, and it gets integrated into one’s attitude. To inculcate this attitude in the self as soon as possible, besides seva unto the Guru and His mission, one should view everything that one does in day-to-day life as seva and make an attempt to do it with bhav. Satsang means ‘Company of the God Principle’. ‘Sat’ refers to Sattva predominance. Awakening of bhav occurs rapidly in a sattvik environment. It is faster in the company of Saints than in that of seekers.

Offering something to God or the Guru is sacrificing. A true disciple is one who sacrifices his body, mind, wealth and even his life for the sake of the Guru. Awakening of bhav occurs faster in such a seeker. 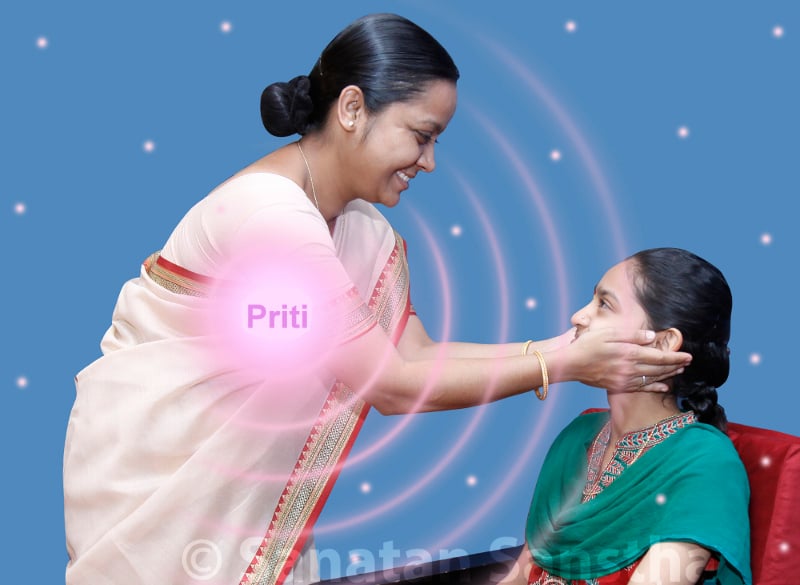 Love being an emotion, is not a part of bhav. Priti however is a component of bhav. The basic difference between love and spiritual love is the presence and absence of expectation respectively. Generally, in worldly life, one expects something or the other from the individual one loves. Spiritual love on the other hand loves every creation of God, without any expectation. Sadhana helps in the generation of spiritual love.

His Holiness Bhaktaraj Maharaj has said, “Only the curious are deserving of knowledge”. One should constantly learn to generate bhav in oneself. One can learn to enhance bhav through study, spiritual experiences obtained by oneself and of others, from other seekers having bhav and Saints. It is more beneficial to learn from seekers who have bhav, and Saints. Since it is not possible for everyone to learn this from Saints, it is more practical to learn it from seekers who have bhav. If one is motivated to learn, then God too teaches through different mediums.

Worldly actions, the attitude towards the results obtained from them and the experiences obtained while performing these actions are useful from the viewpoint of awakening bhav. In the beginning, there is a qualitative difference between actions performed as sadhana and those performed in worldly life. Hence, at first it is easier to awaken bhav through actions performed with respect to sadhana, like puja, Arati, chanting, satseva, etc. Will even a seeker who is full time into sadhana be able to perform these tasks continuously throughout the day ? Certainly not; because, in day-to-day life he has to perform personal tasks such as bathing, taking treatment for an illness, doing household chores, caring for ill family members, etc. These restrict his actions pertaining to sadhana. Similarly, if attempts to awaken bhav only during actions related to sadhana are made, then it will pose a restriction to awakening of bhav. Hence, one should perform every task as sadhana or with the bhav that, ‘I am the servitor of the Guru’; then the entire process of awakening bhav will be enhanced.

Spiritual practice for the spread of Spirituality.

Service unto the Absolute Truth, that is, God Principle,

1. One of the aspects of Bhakti-sādhanā, 2. To render service with an attitude of being a servitor of God,

A string of beads used to keep a count of the chanting.

The Path of Guru's grace, which incorporates 8 steps.

A Hindu scripture written by Sage Vyās, which depicts the epic battle between the Pandavs who always abided by Dharma and the Kouravs, who rode on the path of adharma.

1. Narration of the glory of God through stories, punctuated with devotional songs, 2. Devotional discourses, '

An act, action which despite being a karma bestows the benefits of akarma

An act, action which does not give rise to destiny