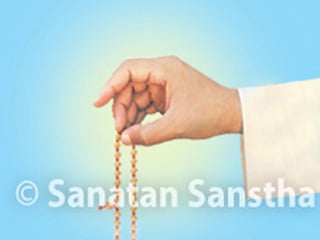 Achieving progressive control over the organs of speech, body and mind is maun (silence). According to the Path of Devotion (Bhaktimarg), ‘forgetting to speak as a result of remaining engrossed in contemplation of God’, is the real silence.

2.1 According to the state

The table below gives information on the different types of silence (maun).

* Information on the four modes of speech viz. Vaikhari, Madhyama, Pashyanti and Para is given in ‘Science of Spirituality: Chapter 9 – Path of Chanting The Lord’s Name (Namasankirtanyoga)’.

2.2 According to the cause

A. Incidental: If one feels that expressing one’s opinion will complicate the issue or will be unacceptable to the other, then under those circumstances, an individual observes silence.

Meaning: During cleansing processes like defaecation, urination, blowing the nose, cleaning wax from the ears, removing discharge from the eyes, etc. and also during intercourse, when one has a bleeding wound, when brushing teeth, performing religious rites for the departed (shraddha) and when eating, one should maintain silence.

A. According to physiology:

3.3 According to the science of Spirituality

A. The stages in silence of speech (vak-moun), silence of hearing (karnamoun)

B. Initially whilst observing silence, it is better not to remain in the proximity of others. Thus there is no question of either speaking by accident or getting thoughts about others. If it is not possible to practise silence in one’s home, then it should be practised in isolation. Since one cannot express any thoughts, initially one gets frustrated from within. Considering this point as well, remaining in solitude proves beneficial.

C. In the period of silence one should not read newspapers, listen to the radio, watch television, etc. as there is a possibility of getting distracted.

D. One should give prior instructions verbally or written, about what food one will eat, etc. as more energy is expended in expressing thoughts through gestures, rather than actual speaking. Besides, there is a possibility of misinterpretation by others.

F. In the period of silence one should engage in chanting, concentration, meditation or introspection, so as to avoid thoughts in relation to speech.

‘The real support for silence is chanting The Lord’s Name itself. Without chanting, the one practising silence can get deluded. Chanting is the real secret of silence.’
– H.H. Mounibaba, Narayangaon

H. It is essential to observe silence when performing vowed religious observances (vrats, vaikalyas) and periodic reading of holy texts (parayans). As a result, the sattva component as well as the spiritual emotion (bhav) increases and the benefits derived from it are augmented.

In any path of Yoga, when desires and instincts and queries of the mind are over, the attitude becomes introverted and silence of speech is automatically achieved.

6. A sage (muni), a sage with steady intellect (sthitapradnya muni) and a great sage (mahamuni)

A. A sage (muni): The one who speaks on no subject other than Spirituality is referred to as a sage.

B. A sage with steady intellect (sthitapradnya muni)

‘Vachamyam is a seeker who observes silence. The description of such a saint is given in Shrimadbhagvadgita (2.56) as follows:

Meaning: He who is unperturbed by sorrow, is unattached to happiness, love (affection), fear and anger is called a sage of steady intellect.’(2)

He who has renounced words is a mouni
Hence one can practise the Yogas with fervour
– Shri Dasbodh 17.5.9

Implied meaning: ‘Despite speaking, the liberated souls do not speak. Silence and spiritual knowledge are The Lord’s secret manifestations, all the others are expressed manifestations. Hence, silence (moun) is described as a psychological penance, instead of a vocal one. That is, as long as there is desire for objects the silence of speech cannot be considered to be the real silence. Brahman is described as the ‘Wordless Brahman’. Hence those who are liberated while still embodied and have experienced that ‘I am Brahman’ are said to be practising silence although they are speaking. Of the different types of silence, deep sleep silence (sushuptimoun) and great silence (mahamoun) are of this type. In short, speech is worldly, not speaking is Spirituality and silence is Brahman. In other words, losing awareness of one’s silence is the true silence !’ – H.H. Kane Maharaj, Narayangaon

A. No great discomfort is caused by practising silence of speech (vak-moun) and silence as of wood (kashthamoun). Others however, are at a loss to understand the one practising it. In order to achieve silence of deep sleep (sushuptimoun) and great silence (mahamoun), one has to undertake spiritual practice as advised by the Guru. Silence of speech and silence as of wood are the tools, while deep sleep silence and great silence are the targets.

B. ‘In the science of Yoga who is a learned fool?

The one who practises postures (asans), pranayam, etc. without following the restraints (yam) and regulations (niyam).’(3)

The same tenet is also applicable to those practising silence of speech and silence as of wood. [Yam and niyam are the first two parts from the Ashtangyoga (Eightfold Yoga) of Patanjali and are related to the mind. Refer ‘Science of Spirituality: Chapter 36 – Path of Meditation (Dhyanyoga)’.]

8. Comparison with other paths of Yoga

Refer ‘Science of Spirituality : Chapter 40 – Comparison of the Various Paths of Yoga’.