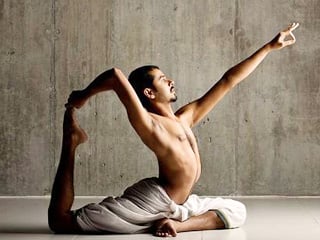 Asans are of two types, external (for example a seat made of wool, grass, deerskin, tiger skin, etc.) and physical (postures).

Definition: It is the ability to remain seated comfortably in one position for a considerable period of time (स्‍थिरसुखमासनम्‌ ।) [Patanjal Yogadarshan, 2/46].

Mastery over postures (asansiddhi): If one is able to sit still without any movement for upto half an hour then it is said that one is able to maintain a posture. If one acquires the ability to perform postures for upto three hours then he is said to have acquired mastery over them.

Types: There are eighty-four lakh types of postures, that is as many types as the species of living organisms. Only a few of them have been discussed here.

A. According to physiology:

B. According to psychology

C. According to the science of Spirituality

A. Learning from an expert: ‘The loss that occurs to individuals, from practising Hathayoga is more than the benefits. For instance people who are underweight should not perform shirshasan (the head stand) and those practising it, should always perform it at the end of a session of postures. Thereafter one should not perform any other postures. After performing all the postures, to overcome the stress and exhaustion which the various bodily organs face, one should remain in shavasan (the corpse posture) for 15 minutes; thereafter practise shirshasan and then repeat shavasan for another fifteen minutes. No matter how skilled one may be in the yogic posture, as a rule, one should never perform shirshasan for more than four minutes.’

B. Avoiding the menace of insects: To avoid the menace of mosquitoes, houseflies, ants, etc. one should use a mosquito net, a fan, insect repellants, etc.

C. Preliminary exercise (warming up): In order to get rid of lethargy and to bring about flexibility, one may do spot jogging or jog for some distance and also perform all types of movements of each of the joints, four to five times. As a result of this it is easier to practise postures. After this preliminary exercise one should perform shavasan for fifteen to twenty minutes and then commence the other postures.

D. Other exercises and postures: A gap of atleast one hour should be maintained between postures and other exercises.

E. Empty stomach: If one has had a light meal (snacks) then for two hours after it or atleast three to four hours after lunch one should not perform postures. One should not eat or drink anything for one hour after performing postures.

G. Bath: Either of the two, bathing or postures may be done earlier. However there should be a gap of atleast half an hour between them.

I. Direction: While performing postures one should sit facing the east or the north, as they are favourable for physical and spiritual progress.

K. Avoid undue fatigue: One must feel exhilarated after performing postures. One should not practise too many postures such that they will cause fatigue.

M. Women and postures: One should not perform postures during menses and also from the fifth month of pregnancy till three months after delivery.

N. Meditation on chanting (japadhyan): Once one is able to maintain a posture, to keep the mind occupied in something, in the beginning one should do chanting and thereafter when one makes progress in postures one must meditate. During that time, therefore one can do chanting or meditation and one need not find separate time for them.

O. The timetable for daily practice: The following table gives the types of postures and their duration if one wishes to practise postures daily for 30 or 60 minutes.

1.3 Absorbing the sweat in one’s body

One school of thought advocates that one should not sweat while practising postures whereas the other says that the sweat should be absorbed in the body for the following reasons.

1.4 Who should not practise yogic postures?

The postures contraindicated in various conditions (for instance a person suffering from cervical spondylosis should not practise shirshasan) are given in books on yogic postures.

‘In the science of Yoga who is a learned fool?

The one who practises postures (asans), pranayam, etc. without following the restraints (yam) and regulations (niyam).’(2) The same tenet is also applicable to those practising only postures. [Yam and niyam are the first two parts from the Ashtangyoga (Eightfold Yoga) of Patanjali and are related to the mind. Refer ‘Science of Spirituality : Chapter 36 – Path of Meditation (Dhyanyoga)’.]

1.5 Comparison with other paths of Yoga

Postures (asan), bandha, mudra and keval kumbhak: From the spiritual point of view postures, bandhas and mudras are hardly of 0.l% importance in comparison to keval kumbhak (spontaneous cessation of breathing).

Definition: A bandha refers to stoppage of flow of the vital energy (pranshakti) in one of the channels, by obstructing it.

When the supply of energy to an organ is reduced with a bandha it helps to decrease the desires of that organ.

When the vital energy flowing through one channel is stopped, it changes its path of flow, that is flows through another channel. For example when the triad of the bandhas, jalandhar bandha, uddiyan bandha and mulbandha is performed, the vital energy flowing through the Ida and Pingala channels starts flowing through the Sushumna, that is the energy flows upwards. This is elaborated in ‘Science of Spirituality : Chapter 38 – Path of Activation of Spiritual Energy (Kundaliniyoga)’. ‘In the science of Hathayoga some bandhas which are a type of postures have been described. They are yogabandha, mahabandha, mahavedha, uddiyan, mulbandha, jalandhar bandha, etc. During kumbhak (breath holding) one needs to close some of the openings from among the nine (navadvar) in the body. These yogic bandhas are very useful for that purpose. Bandhas are also useful for drawing vital energy from a specific part of the body and for stabilising it in another. The study of bandhas is necessary if one wishes to acquire mastery in pranayam.’(3) If kumbhak is practised without a bandha, ailments such as headache, abdominal distension, etc. can develop.

If a bandha is practised prior to practising kumbhak in pranayam, the kumbhak can be effectively practised for a longer duration because though no oxygen enters the body at that time, due to the bandha, the stored energy is utilised in the required place.

A. Mulbandha: Here contraction of the anus is done for as long as possible sitting in sahajasan (the ease posture), padmasan (the lotus posture), etc. Due to the contraction there is pressure on the Muladhar chakra which helps to activate the kundalini (spiritual energy). According to the Gherand Sanhita (3/12, 13) mulbandha is practised in the following manner: The centre of the part between the anus and the sex organ is pressed with the left foot. The right foot is then placed over the sex organ. Thereafter the anus is contracted and the navel is drawn in. This bandha can be performed during various activities such as inspiration, breath holding, expiration, chanting The Lord’s Name, etc.

B. Uddiyan bandha: This word is derived from ut (उत्‌) and di (डी). The meaning of the root di is to fly. This helps the kundalini to ascend (fly) hence it is known as uddiyan bandha. Here the abdominal muscles are contracted inwards as much as possible for a maximum period of time. After practising kumbhak in expiration, this bandha is practised before inspiration. The uddiyan bandha changes the downward velocity of the apan vital energy and unites it with the pran and saman vital energies. As a result the dormant kundalini is activated and the udan vital energy helps the pran or kundalini to ascend through the Sushumna channel.

C. Jalandhar bandha: After breathing in, the chin is kept pressed to the chest for as long as possible. Consequently the energy flowing in the Ida and Pingala channels stops. In this bandha the vital energy cannot go below the Vishuddha chakra.

E. Mahabandha: ‘With the left ankle, pressure should be exerted on the anus. Subsequently the right ankle should be placed over the left.The jalandhar bandha should be performed after contracting the perineum.’ (Gherand Sanhita 3/14, 15).

2.3 Who should not practise bandhas?

Mud (मुद्‌) means to impart Bliss. This is the root from which the word mudra (मुद्रा) is derived. The word mudra has two meanings viz. a symbol (e.g. abhaymudra – the sign of protection) and an act of imparting Bliss.

‘According to the spiritual practice and sects, mudras acquire various meanings.

Those who can sense vibrations from the subtle dimension to some extent may perform the following experiment. Bring together the tips of all the five fingers of the hand and then separate them. Observe what vibrations one gets while drawing them close and separating them. Repeat this four to five times. Then hold the thumb and index finger as done by westerners when eating with a fork and spoon and release them. Repeat this four to five times. Observe what vibrations are experienced with both actions. After one is sure what vibrations were felt, read the following paragraph.

More energy is experienced when all the five finger tips are brought together than when the fingers adopt the posture of holding the fork and spoon. That is why when eating, Indians use fingers instead of a fork and spoon. Morsels of food thus charged with energy are put into the mouth; that extra energy helps in digestion.

Some postures are also referred to as mudras, for example sinhamudra (mudra of a lion), Brahmamudra, viparitkarni mudra (reverse mudra). Here instead of these only the main mudras in which the mudra part is more important than the posture are discussed.

A. Mudras for physical purification

B. Mudras associated with pranayam

E. Twenty-four mudras of the hands: One will realise how innumerable the mudras are from the following mudras performed merely with the hands during certain rituals of worship.