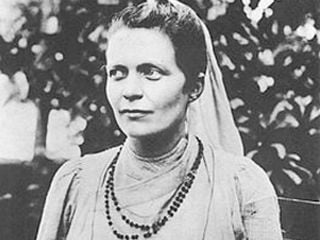 Bhagini Nivedita (1867-1911) came to India in 1898. Before she left this world at the young age of 44, she served India and Hindu Dharma in various capacities. She dedicated her life to understanding Indian culture. She was eulogised as ‘Vivekananda’s Daughter’ by the people, but ignored by the nation’s rulers. Swami Vivekananda lit a spark of devotion in Nivedita and today there is a need to ignite a spark in the youth today.

Bhagini Nivedita was born in Ireland as Margaret Elizabeth Noble. Author & teacher Margaret started studying various religions like Christianity, Buddhism, but found that there were discordant notes in the religions. The burning questions within prompted her to turn towards science, but she faced limitations there too.

1895, Swami Vivekanand arrived in London after a triumphant tour of America. Margaret met Swamiji for first time at the residence of Lady Isabel Margesson. Awed by the knowledge that Swamiji possessed, Margeret followed many of his lectures. She met and discussed many of her queries with him. She was impressed by Swamiji’s noble perspective, brave attitude and affectionate attraction. This generated a confidence and belief in her that “the truth I am looking for, only Swamiji can show me the path to that truth” and after three years she came to India.(ref. Annual ‘Swa’-rupvardhini, 2010)

Margaret was so influenced by Swami Vivekananda’s guidance that in 1898 she traveled to India. She was initiated as ‘Brahmacharini’ by Swami Vivekanand was rechristened as ‘Nivedita’ (one devoted to the service of Divine). After this initiation rite, Swamiji taught her first lesson in Bhakti. He blessed her and said, ‘Go thou and follow Him, Who was born and gave His life for others five hundred times before He attained the vision of the Buddha’.

Swamiji had told Margaret before the initiation, ‘you will have to become Hindu from inside and outside! Material needs, thought processes and nature should also become like a Hindu. For that you will have to forget your own past, every incidence. Complete amnesia!” Comprehending and imbibing spiritual practice and ideals as per Hindu thought process, irrespective of how difficult it would be, was Swamiji stance on the matter. Margaret surpassed Swami Vivekananda’s expectations and immersed herself fully into the Hindu way of life.

Bhagini Nivedita had a knack of understanding others positively even in small matters. In a short span of 12-13 years she had done many activities. Here is a birds eye view of what she has done for society, India and Dharma..

Serving during the plague, establishing and running schools, collecting donations from foreign countries through lectures, preparing a write up based on the research by scientist like Jagdishchandra Basu, laboring to establish temple of science, were some of the ways that Bhagini Nivedita did exemplary social service.

B. Activities regarding Nation & Dharma

On initiation, Bhagini Nivedita became one with Indian lifestyle, language and Hindu Dharma. Being proud of all this she became an avid advocate of Swadeshi products. After Swami Vivekananda shed his mortal remains, she lived by Swamiji’s message of ‘arise and awake and stop not till the goal is reached!’ and devoted herself to complete His work. She travelled all over the country to propagate Swamjij’s message. She also made her mark in literature and art.

Even in revolutionary work she was not to be the one left behind. She would say that ‘Freedom is India’s first requirement’. She was an inspiration to revolutionaries, she participated directly in the freedom struggle, showing courage and intelligence to expose Lord Curzon  in more than one ways and established the legitimacy and validated the richness of Indian Civilisation through her writings and speeches, paying many thousand rupees in court to secure bail for revolutionary Bhupendranath Datta (Swamiji’s younger brother) who had been arrested for his incendiary writings against the ruling British.

While designing national flag as per her idea Bhagini Nivedita has drawn symbol of vajra in yellow color on saffron flag. She has written , ‘Vandematram, Yato Dharmstato Jayah’. More than a century ago, Bhagini Nivedita had understood that ’Dharma is soul of India’, a fact that most people are ignorant about today.