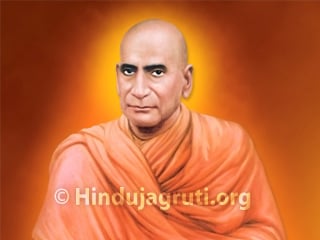 Swami Shraddhanand was one of the Hindu leaders getting killed by the murderous tradition of the Hindu haters. He was killed by a fanatic by name Abdul Rashid on 23rd December 1926. Realising the psychology of Hindus about getting directionless if their leader directing them gets killed, the Hindu leaders are being killed by Hindu haters in a very systematic manner. 125 people from Sangh Parivar have been killed in the last some years in Kerala. Swami Laxmananand was killed in Orissa in 2008.

Whole life having been spent nurturing faith in Veds and Vedic Dharma, He naming himself as Swami Sharaddhanand

Swami Shraddhanand alias Lala Munshiram, got initiated into Vānaprasthāshram (Third stage among the four stages of life, retired householder) at the age of 35 and He became Mahatma Munshiram. He established a Gurukul (A residential school system prevalent in ancient Bharat, where teaching on all areas of life, including spiritual practice was done by Gurus or Sages) at Kangari region near Haridwar in 1902. In the beginning His 2 sons, Harishchandra and Indra were His students and Mahatma Himself became the Acharya (Teacher). At present thousands of students are studying there and Gurukul Kangari is now an University. Munshiram served in Gurukul continuously for 15 years. Later in the year 1917, Mahatma Munshiram got initiated into Sanyāsāshram (The last among the four stages of life, namely, the stage of a renunciant). While speaking at the time of initiation ceremony, He had said that I will name myself. Since I have spent my whole life nurturing Veds and Vedic Dharma and will keep on doing the same in future, so I am naming Myself as Shraddhanand.

Swami Shraddhanand’s mission of liberating the country was invaluable. ‘Marshal Law’ in Punjab and ‘Rowlatt  Act’ were forced upon  Bharatiyas. There was agitation in Delhi against the oppressive ‘Rowlatt  Act’. Swami Shraddhanand was leading the agitation. There was ban on processions then. Swamiji announced challenging the ban that, a procession will be held in Delhi. Accordingly thousands of patriots had joined the procession by the time it reached Chandani Chowk. The Gurkha regiment was ready with guns, bayonets etc. at the command of the British. Brave Sharaddhanand reached the venue with thousands of followers. He came forward fearlessly when they were about to shoot and roared loudly, before killing the innocent people kill me first. Immediately the bayonets were lowered down and he procession went ahead peacefully.

Swami Shraddhanand had given a speech at Delhi’s Jama Masjid in the year 1922. He recited Ved Mantras first and gave an inspiring speech. Swami Sharaddhanand was the only one to have the honour of giving a speech reciting Ved Mantras. This was an extraordinary moment in the History of the world.

When Swami Shraddhanand studied the situation properly, he realised that the Muslim remains a Muslim even after joining Congress, they even could stop Congress meeting for the sake of their ‘Namaj’. Hindu Dharma was suffering injustice in Congress. When He learnt the truth, He immediately left Congress and established ‘Hindu Mahasabha’ with the help of Madanmohan Malaviya

In order to stop the increasing number of Muslims compared to Hindus. He started a Holy campaign of purifying the converted Hindus. He opened an office at Agra. There were many Rajputs at Agra, Bharatpur, Mathura etc. who had been converted to Islam that time only; but they wanted to come back to Hinduism. 5 lacs of Rajputs were ready to accept Hinduism. Swami Shraddhanand was leading this campaign. He organised a huge gathering for this purpose and purified those Rajputs. Many villages got purified under His leadership. This mission created a new consciousness, a new energy and enthusiasm among Hindus and the number of Hindu organisations increased. A Muslim woman by name Ajgaribegum from Karachi was initiated into Hinduism. This incident created a furore among Muslims and Swamiji was known all over the world.

A Muslim fanatic by name Abdul Rashid reached Swamijis residence at Delhi on 23rd December and said that, he wished to discuss Islam with Swamiji. He had covered himself with a blanket. He had hidden a gun inside the blanket. Mr. Dharmapal who was in the service of Swamiji, was accompanying Swamiji. So he could not do anything. He asked for a glass of water. After giving him water when Dharmapal went inside taking the glass, Rashid fired gun shots at Swamiji. Dharmapal had caught Rashid. By the time people gathered there Swamiji was no more. Action was taken against Rashid. Thus Swami Shraddhanand was the victim of murderous tradition of Islam; but He attained martyrdom and made His Name immortal.

As soon as Swami Shraddhanand objected to conversion to Islam,
Gandhiji and Muslims losing interest in Him and fanatic Muslim killing Him

Gandhiji liked Swami Shraddhanand very much. But when He started the campaign of reconverting, the converted Hindus to Hinduism, Gandhiji and Muslims lost interest in Him. Not only this but Abdul Rashid killed Him at point blank with a gun. This desire of Muslims has been fulfilled and is being fulfilled now. The killer, Abdul Rashid, of Swami Shraddhanand was addressed with great honour by Gandhiji as ‘Mere Bhai !’ It is very obvious; because even if a Hindu is being killed in an incident, Gandhiji would politicise it.