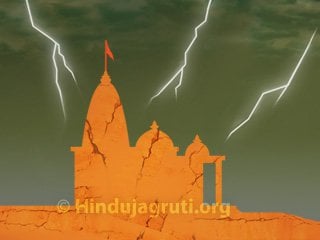 Hindu Temples are pillars of strength and source of divine energy for Hindus. Hindu Dharma has existed for thousands of years despite foreign invasions. One of the reasons for which is its Temple culture. Not too many Indians are aware that even though India is officially a secular democracy, state governments in India can take over Hindu temples and their properties, can appoint the people who will run temple committees and operations, and can take away hundi collections and other donations from temples and use them even for non-Hindu purposes. And they have been doing this for almost six decades now all over India. Such government interference does not occur with churches or mosques or gurudwaras or other places of worship of non-Hindu faiths. They are left alone by the government, and are allowed to own and operate their institutions autonomously, without state interference. In secular India, with an 83% majority of her citizens being Hindus, Hindu temples are singled out for government control and management.

The British government in collusion with local leaders in Orissa took over the properties of the famed Puri Jagannath temple in 1878. Continuing the stance of the British regime and its proxies towards the appropriation and looting of Hindu temples, Indian politicians after Independence in 1947 concocted the fatally flawed, and the blatantly anti-secular, Hindu Religious and Charitable Endowments Act (HRCE Act) in 1951 to “provincialise the administration of Hindu Religious Institutions.” Under its aegis, variously amended and often challenged by Hindu groups over the years, the state governments have taken over thousands of temples, generally under the pretext of preventing “mismanagement” by Hindus. In other words, Hindus, and only Hindus, are not considered capable of managing their places of worship without government oversight.

Thousands of small and medium temples, in addition to nationally and historically important temples such as Jagannath in Puri, Tirupati, Kashi Vishwanath, Vaishno Devi, Shirdi, Guruvayoor, Chamundi Devi, Dattapeeth, Kali Mandir of Patiala, Amarnath, Badrinath, and Kedarnath, are already under government control, and have been so for decades in many cases.

This astounding fact of a supposedly secular government operating, selling the assets of, distributing the collections of, and in other ways imposing state control — often with appointees who are non-Hindu, and even anti-Hindu, bureaucrats or politicians — over Hindu temples, is directly responsible for the pathetic condition of many Hindu temples in India. Many magnificent buildings are deteriorating; and even the daily ritual of cleaning and purifying the precincts is not happening. Some temples don’t even have oil for their lamps because the paltry rupees the government promised when it took over the temple seldom comes on time; priests on miserly salaries are reduced to poverty and asking for money from devotees. These are all too common sights at many Hindu temples today. While there are many causes for the problems faced by temples, chief among them is the misappropriation of temples’ lands and monies.

Examples and Effects of Government Interference

The devastation caused to Hindu temples and other institutions, as a direct result and
consequence of the HRCE act, can be illustrated by a few examples:

B. Elsewhere in Andhra Pradesh, out of 420,028 acres owned by temples in Vishakhapatnam, Kakinada, Guntur, Kurnool, Warangal, and Hyderabad, 60,843 acres were allowed to be occupied illegally by professional land grabbers. The state government, the inheritor of the responsibility under the HRCE Act to prevent such actions, did nothing to prevent these incursions, even though it has a staff of over 77,000 people (paid from a 15% charge on temple revenues) to look after temple interests.

C. In August 2005, the state decided to sell 100,000 acres of the Sri Narasimha Swamy Temple in Simhachalam and other nearby temples.

D. On March 14, 2006, the government auctioned 3,000 acres of temple lands in East Godavari district. Proceeds from these sales rarely reach the temples, which have to depend on the same government for doles to light their lamps and pay their priests.

E. 884 acres of endowment lands of the famous Sri Rama temple at Bhadrachalam have been allocated to Christian institutions by the current government.

F. In Simhachalam, 300 acres belonging to the temple have been allocated for churches and convent schools, who even exercise an illegal authority to stop devotees from visiting the temple atop the hill!

G. There is also an attempt afoot to take over the 500 year old Chilkur Balaji temple.

A. In Sabarimala, the forested hill with the famous temple of Lord Ayyappa in Kerala, 2,500 acres of temple property have been sold by the Communist government controlled Travancore Devasvom Board to a non-Hindu group. Even though this Board gets about Rs. 250 crores every year in income, it is almost bankrupt today, after years of government diversion of funds.

B. Rs 24 crores from the Guruvayoor Devasvom have been spent on a drinking water project in ten nearby panchayats, which include 40 churches and mosques. Some of these non-Hindu places of worship have larger revenues than the Devasvom, but none of them have been asked to pay towards the project, even though their members will be beneficiaries.

In Bihar, government control over the temples through its Hindu Endowments department has resulted, according to the Religious Trust Administrator, in the loss of temple properties worth Rs. 2000 crores.

More Government Control on the Horizon

While these tales of the terrible fate of Hindu temples under government control can be multiplied a thousand fold, and the collapse of the Hindu religious infrastructure as a direct result of government control can be documented in painful detail, it is more important at this point to pay attention to the even more ominous threats of assault that are now on the horizon.

The Maharashtra government, literally bankrupt due to profligacy (including an Indian Enron scandal of mammoth proportions) and bad economic policies, is moving forward with a bill that would enable it to take over the 4.5 lakh Hindu temples in the state. The outpouring of contributions to temples by millions of Hindus is seen as a huge cash flow opportunity by politicians of all stripes all around India. In Kerala, the communist state government has promulgated an ordinance on February 4, 2007 to disband the Travancore and Cochin Autonomous Devaswom Boards (TCDB) and usurp their already limited independent authority over 1800 Hindu temples. In Orissa, the NDA state government is on its way to sell some 70,000 acres of Jagannath temple endowment lands due to a financial crunch brought about by its own mismanagement of the temple’s assets. The BJP government in Rajasthan is planning to auction off temples and transfer their control to the highest bidders, even if they are from the other religions. Under the ‘Apna Dham, Apna Kam, Apna Nam’ scheme, a 30-year lease would be signed between the state government and private bidders on a Build-Operate-Transfer (BOT) basis, similar to national highway construction projects! Many other outrageous proposals of the same kind abound across many states.

Response from the Hindu Community

The Hindu community, after decades of apathy, disunity, and sporadic court fights to secure their rights to practice their religion without government control, has now belatedly woken up to address these fresh assaults. Local leaders have formed coalitions to take matters to court to prevent new takeovers and the sales of temple properties. The existence of the HRCE Act makes it an uphill legal battle to challenge and overturn the government’s stranglehold over Hindu temples and their assets. Recent court victories in Karnataka and Rajasthan are encouraging in this regard. Online petitions and signature campaigns, often led by NRI Hindus who seem to be more aware and concerned about this issue than Hindus in India, have become a standard tool of the newly awakened Hindu community. Most of the mainstream media in India, especially the English TV and press, have a covert or overt anti-Hindu position, and stories of government atrocities against Hindu temples rarely make it into the news pages. Appeals often have to be made to the President of India himself for relief from open aggression against Hindu interests by state and district level government authorities. The collusion between missionary and communal
forces and political parties hostile to Hindus, such as the communists and the Congress party, have further complicated the equation of elements that work against the religious freedom of Hindus.

Even as Hindu awareness grows, and the call for action mounts, the media and political parties are quick to slap on a Hindutva or fundamentalist label to discredit these grassroots efforts of Hindus to claim the same basic religious rights as Indian Christians and Muslims.

Through the millennia, Hindus have found in their temples succor for all their religious and spiritual needs, and vital sense of community with their fellow devotees. The sanctity of temples is diluted by turning them into commercial tourist attractions, their integrity as Hindu institutions is compromised when non-Hindus, or anti-Hinduism elements, are allowed to run them, and their very survival is threatened when the money of devotees is taken away by government appointees or politicians and diverted to fund external causes.

Even if there had been some rationale for the HRCE Act to improve the administration of
Hindu temples in the early days after India’s independence, the exclusive way that only Hindu organizations are so targeted is a blatant violation of the concept of secularism and the religious rights and freedoms of Hindus. If Hindu temples are mismanaged or corrupt, as often alleged to justify their takeover, the sad record of Indian state governments with regard to governance and corruption in general, and their sorry record with the temples they already control in particular, hardly makes them a better candidate to look after the welfare of yet more temples! If Hindu
temples need better management, the communities which support them should form the independent bodies to do so. If the traditional administrations of our temples need revamping for modern times, such reforms and reorganization should be led by practicing Hindus and their leaders, and not by outsiders from the government or non-Hindu constituencies.

The diversion of the wealth of Hindu temples by the states in the first place, and their use to fund non-Hindu purposes, is a flagrant travesty of the principle of separation of religion and state. Government officials looking to take over and exploit yet more Hindu temples should instead consider appropriating some non-Hindu religious organizations first, to restore some balance and equality to their strange brand of secularism. If they dare not do so, they should immediately cease and desist from controlling Hindu institutions and liquidating their assets, even if there be misguided statutes that are in place that give them the legal right to do so. And full reparations should be made to all the temples that have been devastated over the decades through a combination of the HRCE Act and various land reforms that have selectively annexed only Hindu properties in so many states.

The reverse discrimination against Hindus and our institutions by a supposedly secular government cannot be allowed to continue any more. The time has come to secure for the majority Hindus of India the same secular rights and religious freedom that the followers of all minority religions already enjoy.

Devotees don’t offer money for its misuse or misappropriation; therefore, they should get information, in lawful manner, on how their donations are being used by temples.