Where the Kadamba by pass converges at Old Goa stands a tall and slender column. It is a very intriguing pillar. This elegant pillar quitely narrates a tale of woe. In local it is popularly called the ‘Hatkatro Khambo’ literally meaning a pillar where hands were chopped.

It is a relic of an ancient temple and going by some portions, it appears to be from the Kadamb era, cirac 12th – 13th century AD,when Portuguese razed several temples and used the relics of the temple such as the pillars, capitals, doorframes and window to decorate their own structures in the 16th and 17th centuries.

The inquisition was the darkest and most dreaded chapter in the history of colonial Goa. It was introduced in October 1560 at Old Goa. The Hatkatro Khamboo today is a symbol of the horrors of inquisition let loose by the Portuguese ecclesiastical authorities on the Hindus.

On the Hatkatro Khamb of Old Goa there is a short Halle Kannada inscription, which must be of the ancient temple from Kadamb era.

The inscription which reads as ‘DAYADNYA’ alongwith the number four in Kannada was discovered by Dr. P. P. Shirodkar, Director of Archives, Archaeology and Museum when he had gone over there on October 15 to look for the vestiges if any of the dreaded Goa Inquisition. 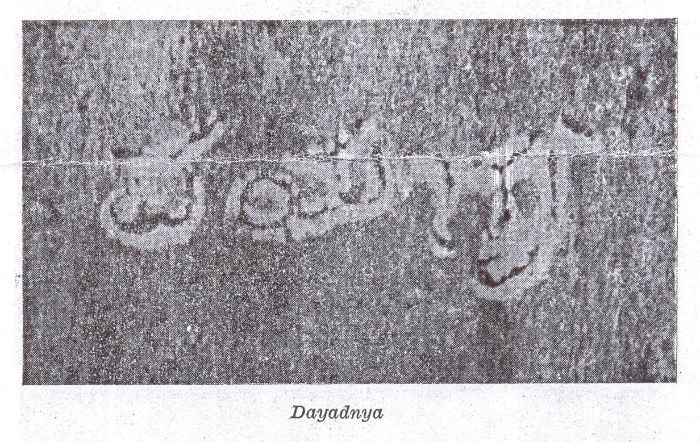 The inscription remained undetected for centuries probably on account of the fear traditionally associated with this monument id the Inquisition. The New Pillory notoriously called as ‘Hatkatro Khambo’ by the local people had been constructed by the end of the 16th century when the Old Pillory which stood close to the rotunda of the statue of Mahatma Gandhi was abandoned. These pillories served as the devices for publicly punishing the offenders of the law who on being tied to it were whipped. At times, it was used to disjoint the hands by twisting the cords so tightly that the victim used to lose the upper limbs permanently. That’s the reason why the local people have continued to call it ‘Hatkatro Khambo’ (Hand cutting Pillar). It lies at the foot of the mount of the Cross of Miracles, on way to Neura.

During the last century, as illustrated by Sr. Lopes Mendes in his book A India Portgueza, it had seven laterite steps for the victims to climb up and it served as a platform for the pillory. But during the present century it has been repaired and since it is in disuse no steps have been provided except about 31/2 ft. partly plastered platform of laterite.

The Pillory which formed two different parts pf the pillars of the old temple were joined together by iron rings to keep it erect. The upper portion with the capital at the top is round in shape and the lower portion is SRIDHARA i.e. an octagonal pillar with a square base. It has roundish ornamental sculpture above it, which had formed as a base for fixing the upper pillar. The inscription is at the foot of the pillar and the number four is just below the ornamental round part above.

The existence of the inscription gives credence to the belief that the two parts of the pillory were originally the pillars of the old temple and most probably of the old Shiva temple of Saptanath in Malar area of Divar the stones of which had been used under instruction from the Portuguese authorities for construction of the churches and convents at Old Goa. The Saptanath temple had been erected by Madhav Mantri, a Minister of the Vijaynagar Kingdom in 1931 A.D. which was subsequently destroyed during period of Bahamani rule in 1471 and later on by the Portuguese. In 1515, Fr. Andre Corsali, a resident from Florence while writing from India had described it as one of the best Temples he had ever seen and that its sculpture and architecture far surpassed the European stone ornamentation. The word ‘DAYANANDA’ on the pillar may be a reference to Lord Shiva, who is considered as ‘one who shows mercy’. The number four probably refers to four sects of Shaivism namely Kapalic, Kalamukh, Pashupat and Shaiva. This leads one believe that it might have been a part of the pillar of a Shiva temple which could be of only one in the vicinity of Old Goa, i.e. Saptanath of Divar. Incidently, it can be pointed out that the exquisitely carved pillar probably a Deepstambh of the same temple still stands in the inside compound of the Museum of the Archeological Survey of India at Old Goa and its upper portion with arrangement for wicks and oil has been used as a Baptismal Font at the door of the Church of St. Francis of Assisi.

The discovery of the new inscription throws new light on the pillar architecture of ancient Goa.