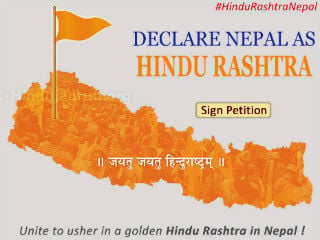 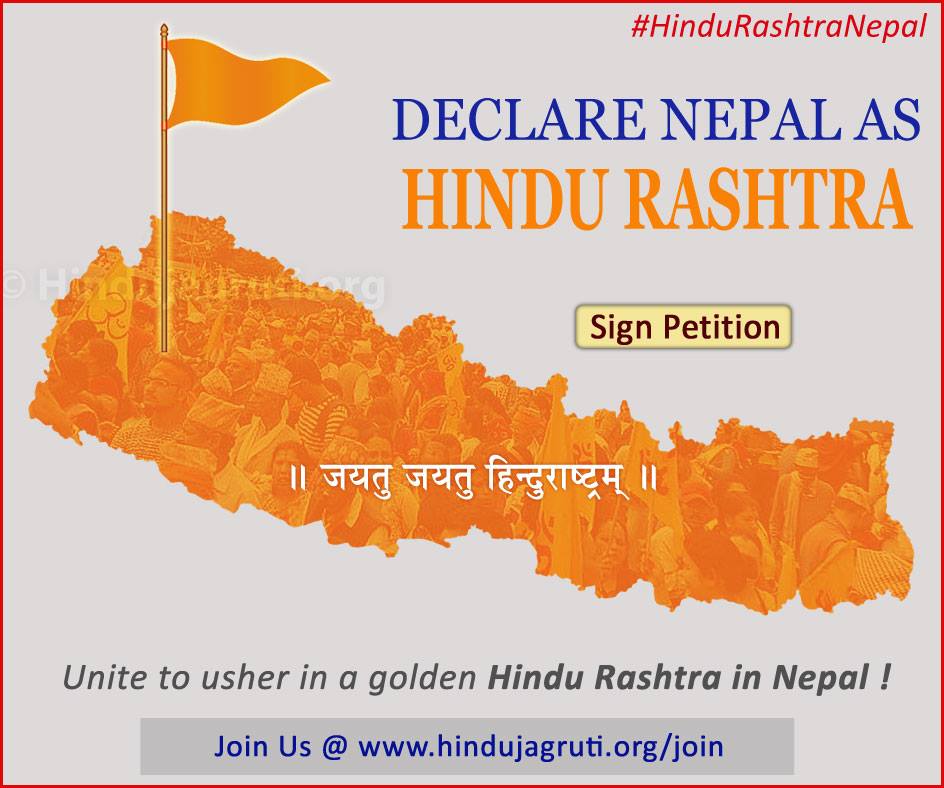 However, due to the anti-Hindu school of thought and anarchist tendencies of the leftists, Nepal lost its position as the world’s only Hindu Rashtra and was declared a ‘secular’ nation. Maoists and political parties, with majority of the members receiving funds from Christian countries have hatched a conspiracy to declare Nepal as a secular nation; but a final Constitution of Nepal is yet to be written. Due to this uncertain status of the Constitution, Hindus from Nepal still consider it as a Hindu nation.

Sign the online petition to support the efforts to declare Nepal as Hindu Rashtra.

Support the efforts to declare Nepal as Hindu Rashtra

The anti-Hindus have used a multipronged approach to slowly but surely destory the age old traditions and culture of Nepal. One such heinous act was to try and take over the treasury of the Pashupatinath temple. What the anti-Hindu forces would have done to the wealth of the Pashupatinath temple is as good as anyone’s guess. However, the Supreme Court of Nepal came to the Hindus’ rescue when it ordered the anti-Hindus to keep their hands off the temple treasures. In a ‘secular’ Nepal, temples like Pashupatinath, Doleshwor, Seetamata mandir will be open to ‘preying’ by antiHindu forces.

Christian missionaries are hatching a deep rooted conspiracy so that Nepal should remain ‘Secular’ state as per the interim constitution of 2007. Pictures and news from Nepal after the massive earthquake shocked people across the globe, but amidst all these chaos, tragedy and human suffering Christian Missionaries were busy marketing Jesus and Christianity. The secular nature of the government is conducive to such activity. The preliminary draft of the constitution being drafted now contains Section 31 (3), expressly forbids religious conversion, and is detrimental to their plans of turning Hindu Nepal into Christian Nepal. So the Christian missionaries and the countries controlled by them are trying hard to ensure that Nepal remains secular. However, Section 31 (3) is a welcome move to preserve the Hindu identity and culture of Nepal.

Conspiracy by China and Pakistan

Historically Nepal and India have an open border and free mobility of populace across borders; but China is increasingly working to take over India’s position as the Nepal’s largest trading partner. China’s well thought out plan to ‘takeover’ Nepal consists of ‘goods’ (import and export), ‘transport’ (rail and road links), ‘energy’ (building dams and supply of electricty) and ‘military assistance’. On the covert side, China has been funding and arming the increasingly powerful and anti Hindu Maoist terrorists who have wrecked havoc in Nepal and India.

Not far behind in this is Pakistan, who uses Nepal as an easy gateway to slip in terrorists to India. If this situation continues, it poses a huge threat, not only to Hindus in Nepal, but to India also.

Hindu Janajagruti Samiti organises ‘All India Hindu Adhiveshan’ every year with the aim to defend the Hindu society and Dharma from various dangers and to establish a ‘Hindu Rashtra’ in Bharat. Hindu leaders from many countries including Nepal have attended these conventions and expressed their unanimous participation in passing a resolution to declare Nepal as Hindu Rashtra.

How you can help ?

1. You can participate in protest rallies, gatherings etc. organised by various Hindu organisations in and outside Nepal. We will try to publish relevant information as and when possible.

2. You can sign the online petition with demand to declare Nepal as Hindu Rashtra

3. You can call or email on following contact details and express your desire to see Nepal reinstated as a Hindu Rashtra

How Hindu activists in Nepal are trying to declare it Hindu Rashtra ?

This video exhibits the efforts by various Hindu organisations and their leaders to pressurise Govt to declare Nepal as Hindu Rashtra in forthcoming new constitution. Also it explains about what Nepali citizens want – Hindu Rashtra or Secularism ?

Nepal Should Again Declare Itself a ‘Hindu Rashtra’: Adityanath