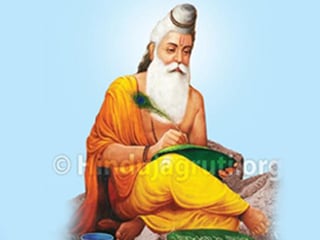 Sage Valmiki is a great sage, a Brahmarshi; and he also gave the ‘Ramayana’ which the world can never forget. It is one of the great epics of the world. People of other countries read it in their own languages. The study of the ‘Ramayana can reform our lives. We can never forget Sage Valmiki who gave this great epic to us. Let us offer our salutations to that great sage and bard.

The poet, who composed ‘Ramayana’ and taught the song and story to Lava and Kusha, was a great sage by name Sage Valmiki. How this man became a sage and a singer-poet is itself a very interesting story. Sage Valmiki’s Ramayana is in the Sanskrit language. It is a very beautiful poem.

Sage Valmiki’s ‘Ramayana’ can be sung. It is delightful to the ear like the sound of the cuckoo. Sage Valmiki has been described as a cuckoo on the tree of poetry, singing sweetly. Those who read the ‘Ramayana’ bow to the great Sage Valmiki first and then turn to the epic.

Writing of the Great Epic Ramayana

Sage Valmiki went to the river Ganga to bathe. A disciple by name Bharadwaja was with him carrying his clothes. On the way they came across the Tamasa Stream. The water in it was very clear. Sage Valmiki said to his disciple, “Look, how clear is this water, like the mind of a good man! I will bathe here today.”

Sage Valmiki was looking for a suitable place to step into the stream, when he heard the sweet chirping of birds. Looking up he saw two birds flying together. Sage Valmiki felt very pleased on seeing the happy bird couple.

Just then one of the birds fell down hit by an arrow. It was the male bird. Seeing the wounded one, its mate was screaming in agony. Sage Valmiki’s heart melted at this pitiful sight. He looked around to find out who had shot the bird. He saw a hunter with a bow and arrows, nearby. The hunter had shot the bird for food. Sage Valmiki was very angry. His lips opened and words came out: “You, who have killed one of a happy couple, may you not yourself live long!” A shloka was born out of his sorrow.

Meaning: You will find no rest for the long years of Eternity. For you killed a bird in love and unsuspecting

The sad plight of the birds had moved Sage Valmiki to curse the hunter, but yet he felt very unhappy, because he had cursed him. He expressed his sorrow to Bharadwaja who was with him. He was equally surprised that a shloka should have come from his lips.  As he walked back to his ashram and also later, he thought only of the shloka.

While Sage Valmiki’s mind dwelt so intensely on the shloka that had sprung from his lips, Brahma, the Lord of Creation, appeared before him. He said to Sage Valmiki, “O great sage, the shloka which came from your lips was inspired by me. Now you will write the ‘Ramayana’ in the form of Shlokas. Narada has narrated to you the story of the ‘Ramayana’. You will see with your own eyes all that happened. Whatever you say will be true. Your words shall be truth. As long as there are rivers and mountains in the world, people will read the ‘Ramayana’.” So Lord Brahma blessed him and disappeared.

Sage Valmiki wrote the ‘Ramayana’. He taught the Shlokas first to the sons of Sri Rama, Lava and Kusha. They were born twins in Sage Valmiki’s ashram and grew up there.