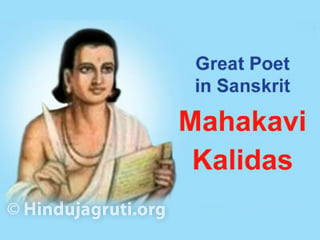 One of the greatest poets and dramatists in Sanskrit. His chronicle of the kings of the Raghu clan (‘Raghuvamsha’), the great play ‘Shakuntala’ and other works depict, through many great characters, the highest ideals of life as seen by the ancient people of Bharat.

There are hundreds of languages in the world. However, great and classical literature which people in all countries need to read is found only in a few languages. One such great language is Sanskrit. It is one of the oldest languages. It is the mother of several Indianlanguages such as Hindi, Bengali and Marathi in the North. Kannada, Telugu and other languages in the South have also been nourished by it.

It needs the genius of poets who create literary epics and great thinkers for a language to achieve world-renown. Sanskrit is eminently lucky in this respect. Sages’ celebration of the wonders of nature, the sky, the stars, mountains and rivers, the sun, the moon, the clouds, fire (‘Agni’) and their devout offering of prayers to the Universal Power are all found in the Vedic classics which/are in Sanskrit. Puranas and historical epics like the Ramayana and the Mahabharat vividly describe the battle between the good and the evil. They also portray the virtues like devotion to truth, a sense of sacrifice, heroism, cultured living, etc. In Sanskrit there are also beautiful stories of birds and animals like Panchatantra; stories extolling good and basic qualities of wisdom and intelligence. Sanskrit can also justly boast of a rich treasure house of plays, poems and many scientific and philosophical treatises.

A poet who has made a distinct and glorious contribution to this sumptuous Sanskrit literature is Kalidas. He has pictured in his works the beauty in life and pondered upon how we can give pleasure to others by generous and graceful behavior. His portrayals are vivid and heart- warming; his word power is unique. In a few words he is capable of bringing out the entire meaning intended. His writings touchingly show up a noble, meaningful mode of life for the people to pursue. His works are an intellectual treat to thinkers and common readers alike.

A Great Scholar and Poet

Who is this Kalidas ? When did he live and where in India was he residing? Much discussion has taken place for a long time now about his life and times. Not many queries on this score have elicited definite answers. Several legends have sprouted around him.

According to one such popular legend, Kalidas wasn’t always so wise and learned. In fact, there was a time he was considered to be one of the stupidest people in the kingdom!

One sunny day, Kalidas was sitting on a branch of a tree, trying to saw it off. But the dimwitted man was sitting on the wrong end of the branch, so when he finally sawed through the branch, down he tumbled! This act of sheer stupidity was observed by some shrewd pundits minister passing by.

Now these pundits wanted to play a trick on the arrogant princess, to teach her a lesson. She was determined to marry someone who would defeat her in a debate about the scriptures. The princess had heaped considerable abuse on them over a period of time, and they were determined to extract their revenge. So, when they chanced upon Kalidas, they decided to present him to the queen as a suitable match for her.

In order to conceal his stupidity, the pundits asked Kalidas to pretend that he was a great sage, who was observing a vow of silence. Kalidas readily agreed, and they presented him to the queen, saying that Kalidas would only communicate by way of gestures. When the queen asked Kalidas a few questions to test his intelligence, Kalidas gesticulated wildly and the astute pundits ‘interpreted’ these gestures as extremely witty answers and retorts. The princess was suitably impressed, and the couple was married without much delay.

Kalidas’s stupidity could be concealed for only so long, and the night of the wedding Kalidas blurted out something inane. The princess realized that she had married a prize fool. Furious, she threw him out of her palace, and her life.

The dejected Kalidas wandered around, till he came to the bank of the river. He contemplated taking his life when he suddenly saw some women washing clothes on the edge of the river bank. He observed that the stones which the women were pounding with clothes, were smooth and rounded, while the other stones were rough and ragged. This observation hit him like a thunderbolt, and it dawned upon him that if stones could be worn through and change their shape by being pounded upon by clothes, then why couldn’t his thick brains change, by being pounded upon by knowledge!

Kalidas thus grew determined to become the wisest and most learned man in the country, and to achieve this end he started indulging in intellectual pastimes, reading, meditating and praying to his goddess Kali to grant him divine knowledge. His wish was fulfilled.

This is one of the most popular legends about Kalidas. There are several other stories but they lack authenticity.

It appears Kalidas was at the court of emperor Vikramaditya. The place and time of this king are also not definite. But it can be said with some certainty that Kalidas lived before the 6th century A.D., i.e., about 1400 years ago. But when exactly he lived before the 6th century is not firmly established. Though a deep affection for the city of Ujjain is discernible in his works, it cannot be said with certainty that he lived there. But we can assume that, wherever he may have been born, he had lived at Ujjain.

Kalidas, however, had good knowledge of the whole of Bharat. In his poem ‘Meghaduta’, his descriptions of mountains and rivers and cities and villages stretching from Ramagiri in Central India up to Alakanagari in the Himalayas are very beautiful. In another epic poem ‘Raghuvamsha’, Kalidas, while portraying the conquests of emperor Raghu, describes the places and peoples, their modes of living, food-habits and trades and professions, rivers and mountains in almost the whole country — Assam, Bengal and Utkal in the East; Pandya and Kerala in the South and Sind, Gandhara and other places in the North-west.

Reading these pen-pictures, one cannot help but conclude that the poet must have had a personal knowledge of these areas. In short, he must have traveled widely across the length and breadth of the land, seen those places, talked to the people and studied their modes of living.

Kalidas possessed that distinct intellect which makes one a great poet. He was a scholar and his works display his poetic genius as well as scholarship. Also they are marked by a belief of what is good in life and people’s noble goals of life. He could describe the rich and wealthy life of a royal palace and the serene, simple and peaceful life at a hermitage with equal understanding. He could, likewise, describe the joys of the marital life of a man and his spouse as well as their pangs of separation. He creates scenes of a serious and thoughtful nature as also hilarious scenes of light comedy. In his works is found an excellent combination of art-consciousness, unmatched wordpower and an unparalleled capacity for vivid portrayals.

The Great works by Kalidas

One of Kalidas’s greatest works is ‘Kumarasambhava’. Critics maintain that Kalidas wrote only the first eight chapters of the epic poem. The work describes the marriage of Lord Shiva and his consort Parvati. It begins with a fine description of that giant among mountains, the Himalaya.

Kalidas’s poem gives us a vivid picture of what a good, meaningful life a man could and should lead as propounded by our learned ancestors.

Kalidas’s second epic is ‘Raghuvamsha’. There are nineteen chapters (‘sargas’) in this poem. The epic describes the history of the kings Dileepa, Raghu, Aja, Dasharatha, Sri Rama, Lava and Kusha. It also deals briefly with the twenty kings from Nala up to Agnivarna.In thebeginning, the poet extols the fine qualities of the kings of Raghu dynasty.

‘Raghuvamsha’ depicts our ancient, historical culture and tradition. Our ancestors had discussed in detail about such matters as to who could be a good ruler, who is a man of ‘tapas’ (penance), how one should lead a good, purposeful life and the like. The poet has portrayed diverse characters like Vashishta, Dileepa, Raghu, Aja and others. Agnivarna is an example of a king who could be termed as ‘depraved’.

‘Malavikagnimitra’ is Kalidas’s first play. The author shows his humility and is   uncertain whether people would accepts play. He pleads ‘Puranamityeva Na sadhu   sarvam,Na chapikavyamnavamityavadyam’ (Everything old is not good, nor is every thing knew badly). There may be some thing, which may not be of much use in the  old, and the new may also be good. The theme of the play is the love-story of Agnimitra and Malavika.

‘Abhijnana Shakuntala’ is Kalidas’s greatest creation. This literary masterpiece has been translated into several languages around the world. The story of Shakuntala appears in the ‘Adiparva’ chapter of the epic Mahabharat.

‘Meghaduta’ is a beautiful love-lyric. A ‘Yaksha’, who is forced to be separated from his mistress for a year, sends her a message. The lady is residing at Alakanagari. ‘Go and tell her that I told so’, instructs the Yaksha to the cloud who becomes his messenger. The very fact that a cloud (‘Megha’) is chosen to be a messenger of love is something unique. The poet fascinatingly describes the travels of the cloud from Ramagiri to Alakanagari. The rivers, hills and mountains, cities and towns, vast fields, farmers’ daughters as well as girls in the cities, the birds and the bees — are all described by the poet vividly. It is a total picture of a beautiful world. His descriptions of Alakanagari, the Yaksha’s house and the garden around, theYaksha’s wife playing the Veena and her grace and beauty are captivating.

‘Ritusamhara’ is a somewhat small-scale poetical creation depicting the six seasons. However, it is equally appealing. The poet here sees beauty in everything. Each different facet of nature he sees in each of the seasons fascinates him; it is a romantic sight.

Summary of the life and work of Kalidas

In sum, it gives us great aesthetic pleasure to read Kalidas’s works. His descriptions enthrall us. With him we are in the company-cultured a highly civilized, cultured personality. It is like a flower which, in bloom, spreads its fragrance all around. And a man’s mature, ripened mind and intellect brings pleasure to those around him. In Kalidas’s creations, we enter the world of people pure in mind and body and who are graceful. We learn here the manner in which man’s nature can reach high, moral levels. It pleases us deeply to come into contact with characters like Parvati, Dileepa, Raghu, Aja, Shakuntala, Dushyanta and Kanva. It is for this wonderful experience that we as well as people in other countries read Kalidas.