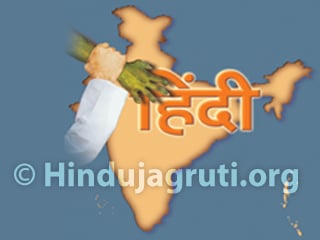 Sanatan insists on usage of Hindi based on Sanskrut language!

Just as for the spiritual progress of an individual his body-sheaths are required to be pure the state of the ‘Rashtrabhasha‘ also needs to be improved and kept in a purified condition along with improvements in land, the people, the culture and Dharma for the progress of the Nation. 14th September is ‘Hindi Day’. On this occasion lets us take a look at the reasons for deterioration of our Rashtrabhasha, the assaults of English and Urdu languages on it and other related information.

2. Hindus do not insist on a National Language!

When Mark Tully, a BBC reporter retired from the service, he was interviewed on BBC. The interviewer asked him that since he worked for so many years in Bharat, did he find any difference there after independence. He answered. “Though the ‘English Rule’ is departed from Bharat, the ‘Anglicised Rule’ is still alive. Nobody from his state can speak fluently in his own mother tongue; because there is no insistence on Nationalistic concept. When the German or Russian leaders go abroad, they interact in their own language. I feel that the whole calculation has gone wrong for Bharat as there is lack of Nationalistic concept.” Today whatever adverse is happening in the country is because of the lack of nationalism. Many future generations will have to face the ill effects of this. The rulers just want to hold on to power, not bothering whether the country survives or not!

As per Article 343 of Bharatiya constitution, it is declared that the official language of Bharat would be ‘Hindi’ and the script ‘Devnagari‘. Even after 62 years of independence there is no such picture to suggest that Hindi is our official language. On the contrary it is seen that hatred towards Hindi in southern states has increased. Regarding the script one unfortunate thing is that we have left using the numbers from 1to 9 in Devnagari script. Under the name of ‘International numbers’ English numbers from 1to 9 are in usage. (On some watches we even use Roman numbers). The political rulers have compelled our country which has given all the numbers to the world including zero, to follow a dishonoured policy on language and script.

As per article 344 of our constitution, a committee was appointed for improvement of our official language. The committee submitted a resolution to the President that the question papers for Indian Administrative Service examinations be set in Hindi or other regional languages instead of English; but still the final decision is pending.

The article 348 of constitution says that all the affairs of High courts and supreme courts will take place in English. We are still not able to stop the use of English in our courts even after Independence and replace it with Hindi.

4. Hindi based on Sanskrut is only our National language!

The Hindi language is equally threatened by English and Urdu. In this regard the guidance of Swatantryaveer Sawarkar is like a guiding light for Hindus even today. An annual gathering was being organized at Pune by ‘Hindi Prachar Sangh‘ on 2nd September 1940. Swatantryaveer Sawarkar who was eminent promoter of Sanskrut based Hindi was presiding over the function. In his speech Sawarkar said , “Sanskrut based Hindi should be the national language of Hindustan. Before the arrival of either British or Muslims the pilgrims coming from different states who would travel all over Bharat for visiting four main places of pilgrimage (Char Dham) as well as the businessmen would converse with each other in Hindi. In British regime we all forgot that. Now again we are reminded of national language Hindi during our struggle for independence. Gandhi also tried hard for Hindi language. We should be thankful to him; but for the sake of Hindu-Muslim unity he changed Hindi to ‘Hindustani‘. See how was the result of this. In the Nagpur session one sentence ‘Rashtrabhasha ke vikas ka prayatna karana‘ was to be mentioned in a resolution. One Mr. Ali was a member of the resolution committee. He said one does not understand the word ‘bhasha‘ in the word ‘Rashtrabhasha‘. So a word ‘Sab ki boli‘ was suggested. But it was not felt correct and finally a word ‘Koumi jaban‘ was agreed upon. The word ‘vikas’ was replaced by ‘tarakki‘ under the pretext that the rural people may not understand it! But still Ali miya was not satisfied and he asked the meaning of word ‘prayatna‘ which was later replaced by the word ‘koshish‘ and thus the sentence ‘Rashtrabhasha ke vikas ka prayatna karana‘ was replaced by the sentence ‘koumi jaban ki tarakki ki koshish‘. Now see was this Hindi language? No, it was a purely foreign language that is Pharasi based Urdu meaning ‘Hindustani‘!” The example of Ali miya shows how a Muslim can dominate Hindus because of Hindus‘ lack of pride for the mother tongue. Not only language but on many other issues like Motherland, national flag, national anthem, Sriram-Srikrushna, Janmabhumi etc. the Muslims have dominated Hindus time and again.

Gandhi had a basic wish to have Hindi as national language but came down from ‘Hindi‘ to ‘Hindustani‘ due to his madness of appeasing the Muslims. The Muslims who had a good judgement of his mentality utilized it fully. Regarding Hindi Bar, Jinha would say, “Gandhi established ‘Hindi Prachar Sangh‘ to deprive Urdu as a prevalent public language till today and to propagate sanskrut based Hindi as national language.” As and when B. Jinha would accuse in this fashion, Gandhiji and Congressmen would borrow more and more words from Urdu and add it in Hindi to convert it into ‘Hindustani‘. As a result of this ‘Hindustani‘ many of the textbooks in those days would contain such words as ‘Badshah’ Ram, ‘ Begum’ Seeta and ‘Ustad’ Vasishta in the lessons on Ramayan!

6. Nehru wrote letter to his mother in English!

Many of us get a doubt while going through the history that whether it was the destiny which made Gandhi-Nehru to take birth in Bharat to act against the philosophy of nationalism. Mr. Aravind Vithal Kulkarni , a senior journalist says in his editorial of magazine ‘Purusharth‘ ( March 2006), “Sawarkar vigorously carried on his campaign of purification of language as part of total revolution during British rule and did not allow a lapse in the tradition of Chatrapati Shivaji Maharaj. But the lapse was seen after Bharat‘s Independence! Nehru refused to give Hindi the place of official language instead of English. When President Rajendra Prasad suggested to him that when guests from abroad visit the residence of Prime Minister, he should talk to take them in Hindi with the help of an interpreter, Nehru made a mockery of it. The Congress culture has directly ruled Bharat for 50 years. The politicians with Congress culture did the special work of imparting extensive and deep reputation to Islam religion and English language and in comparison giving Hindu Dharma and Bharatiya languages a secondary place. Nehru would write letter to his mother in English while studying in England. His roommate in the hostel would be surprised at this. He would ask Nehru whether there was no other language besides English through which he could communicate with his mother.” It needs no astrologer to understand that young Jawaharlal must have rejected the suggestion of his friend!

This same Jawaharlal later became the first Prime Minister of Bharat. The dark shadow of the thoughts of first Prime Minister is clearly seen on the Bharatiya constitution. As per the article 120 of constitution it was decided that for the sake of convenience the affairs of the parliament would be run in Hindi or English languages for first 15 years. It was even pledged that time that after 15 years that is from 1965 onwards the usage of English language would be stopped. Now 62 years have passed by since such a pledge was taken; but Hindi language has still not received the status of being a ‘National language’. Even though the politicians might have forgotten the truth that the nation which holds no pride in its language soon perishes, the people can not afford to forget it!

7. Our national language: Sanskrut based Hindi

The language which is easy and conducive, only can become the national language. Therefore the language which is based on Sanskrut in the Hindu majority Hindustan will only be able to easily grab the place of a national language. Therefore the party which is in favour of purity of language in HindiHindi fully Sanskruturdu and foreign words which have entered in it and are remnants of the Muslim superiority. No unnecessary urdu or English word should be allowed to move with Hindi. Unless we strictly adhere to this policy we will not be able to win the tug of war of the assault of foreign languages.

Sanatan insists on usage of Hindi based on Sanskrut language!

Like in Urdu language Hindi language also has the method of putting a dot (nukta) under some words, for example, n]peej, peesÌ[, ieeÌ{. The full stop given under a letter changes its vibrations and thus reduces its sattvik (pure) attribute. Sanatan Sanstha is follower of Divine language Sanskrut as it contains maximum chaitanya. Basically, Sanskrut language only is the mother of Hindi language and hence we are hereafter stopping the custom of putting dot or nukta under a letter in Sanatan’s holy texts and its magazine in Hindi. Some of may be anxious that if dot is not put under a letter then how to pronounce it. Such anxiety is baseless as can be understood from following examples.

1.    Veds never used any dot (nukta) under any word, even then the pronunciation of Veds have not changed for thousands of years.

2.    To quote a modern example, English language does not use nukta anywhere and yet nobody finds any difficulty in speaking it anywhere in the world.

Using Hindi language based on Sanskrut is ‘moving towards Chaitanya‘. Thus everybody should act accordingly to protect our own language and participate in the mission of defending for Dharma and thus perform his duty towards Dharma!- Dr. Jayant Balaji Athavale, Founder, Sanatan Sanstha (Daily Sanatan Prabhat, 28th September 2007)