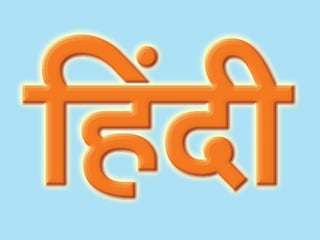 National language is the mental body (sheath d) of the nation. Our national language Hindi has brought all Bharatiyas together. However in the post-independence era, the ungrateful Indians, especially the ruling politicians, are trying to destroy Hindi language with the help of Urdu and English languages. The comman man is ignorant about the seriousness in these things. Some times one comes across words like ‘Badshah (emperor) Ram and Begum (empress) Sita‘. Many Bharatiyas call out ‘Aey Maalik‘ instead of calling out ‘Hey Bhagwan‘.

At the time when muslim rulers prevailed, Urdu being the language of rulers, Urdu prevailed instead of Hindi. Later during Gandhi’s Congress rule, Hindi got transformed into Urdu mixed Hindi (i.e. so-called ‘Hindusthani‘ Hindi). In addition to it, Congress decided to change Hindi script (LIPI) to Urdu.

Rulers with demonic attitude are determined to destroy Hindi having Sanskrut base from Bharat as demons stole away Vedas in previous yugs. We pray to Shri Guru, ‘Let Bharatiyas, especially the Hindus understand the importance of Hindi and to make them strive for reinstating it, atleast for the sake of their own benefit!’

‘The the national language Hindi is the one due to which the balance of this country has been maintained.’

In the era of Kaliyug, when sattvikta (purity) deteriorated, Sanskrut and Marathi languages became inactive, that time Hindi language was created to maintain the balance of the nation to provide a strong support to it in form of a pillar. The Mantriks (see note 1) attacked various Bharatiy languages and to give them support and to coordinate them Hindi language came into existence.

Creation of this language, which maintained the balance of the degraded level of divine consciousness of our country, dates around 1000 years back.

3.A. Process of creation:

The Mantriks transmitted sound waves containing black magic powers to several regions of the world. Through the medium of these sound waves, the Mantriksraja-tama oriented languages propogating black energy took birth as per the composition of the three components (trigun) in those regions.

highly insulted those regions. As a result of this, various However in Bharat, as a result of the attack from Mantriks, instead of raja-tama oriented language taking birth, Hindi language got created and later, this Hindi language itself balanced the degrading level of our country’.  – An unknown energy, through the medium of Shri Vishal Pawar (21.6.2008)

Note 1: Demonic energies that trouble human beings are the invisible souls (subtle bodies) from the Nether and Hell region. Demonic engeries are classfied as ghosts, devils, witchcrafts etc. Out of these mantriks are the the most mightier negative energies.

4.A. National language is mental body of the nation:

‘Just as a body of human being comprises of physical body, vital body, mental body, causal body and supracausal body, in the similar manner, the human form of the nation also consists of five bodies in the following order: land, citizens, language, culture and religion. Humans have ‘desires or defects (vikar)’ in their mental body, whereas the nation has ‘language’ in its mental body. The nation projects its feelings through the medium of language.

Just as every human being must purify its body sheaths for spiritual progress, in the similar manner if a nation needs to progress, then along with purification of land, citizens, culture and religion, it is necessary to improve the state of its ‘language’ and to maintain its purity.’  – Shri Sanjay Mulye, Ratnagiri

4.B. Hindi stands third in the list of most widely spoken languages in the world:

‘As per the research conducted by ‘World Languages department’ in New York, Hindi language stands third, just after English and Chinese, in the list of most widely spoken languages in the world. Hindi is used as a spoken language right from Nepal, Kabul-Kandahar (Afghanistan) till Dhaka (Bangladesh). Hindi is the commercial language of Mauritius and Fiji. A ‘World Hindi sumit’ was also conducted’ in which the lead was taken by those countries in which Hindi is spoken.

5. Congress culture to give secondary status to Hindi language:

‘Congress ruled Bharat for 50 years. The rulers under the influence of Congress culture, have granted vast and high status to Islam religion and English language and in comparison to that, a very low and secondary status to Hindu religion and Bharatiya languages. Its clear that Nehru’s thoughts have a deep impact on Bharatiya constitution. As per the constitution act/section 120 (Pl. Check), it had been decided that the parliamentary proceedings will take place in Hindi or English language for the first fifteen years, for convenience sake. A pledge was taken that, after 15 years, i.e. from 1965 onwards, all proceedings will happen in Hindi language. Several decades have passed since then, however Hindi language has still not attained status as ‘National language‘ ! The nation which does not give due respect to its national language, definitely go on collpsng. Even if our politicians have forgotten this fact, the citizens should never forget it!!’ – Shri Sanjay Mulye, Ratnagiri