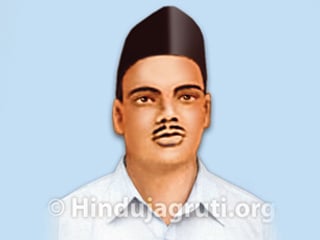 Shivram Hari Rajguru was born in an average middle-class Hindu Brahmin family at Khed in Pune District in 1908. He came to Varanasi at a very early age where he learnt Sanskrit and read the Hindu religious scriptures. He had great admiration for Shivaji and his guerilla tactics.

At Varanasi, he came in contact with revolutionaries. He joined the movement and became an active member of the Hindustan Socialist Republican Army (HSRA). Rajguru had fearless spirit and indomitable courage. The only object of his adoration and worship was his motherland for whose liberation he considered no sacrifice too great. He was a close associate of Chandrashekhar Azad and Bhagat Singh and his field of activity was UP and Punjab, with Kanpur, Agra and Lahore as his headquarters. Rajguru was a good shot and was regarded as the gunman of the party. He took part in various activities of the revolutionary movement, the most important being Saunder’s murder. Chandrashekhar Azad, Shivram Rajguru, Bhagat Singh and Jai Gopal were deputed for the work. On 17th December 1928, while Saunders came out of his office and started his motor-cycle, he was shot dead in front of the police headquarters at Lahore by Rajguru.

At the time of his martyrdom, Rajguru was hardly 23 years of age.

Rajguru’s village does not know his greatness !

Once I visited Rajgurunagar (near Pune) on the occasion of Shivaram Hari Rajguru’s birth anniversary. The whole village was decorated well. Many large hoardings were erected by various political parties with a politician’s picture below the Rajguru’s picture, all to gain political mileage. People carried placards that said ‘Rajguru Amar Rahe’! However, when i started interacting with the villagers about Rajguru, I was shocked to see their ignorance about his life and sacrifice. They were just saying that he was great due to his association with Bhagat Singh and Sukhdev. Some even thought he was a follower of Gandhi in the non-violence movement !

You get a similar experience when you go all across the Maharashtra. At one place after my lecture on Bhagat Singh, Rajguru and Sukhdev, a man in his forties came to me and said, “Today I came to know that they were three persons. Till now I was thinking it was one person’s lengthy name.” I did not know how to react to this !

24th August, 2008 marked the birth centenary of Rajguru. It was unfortunate that neither the chief minister, deputy chief minister (of Maharashtra) nor any one of their rank visited Rajgurunagar on this day. Not only this the central government has not released any commemorative postal stamp in his honour. The relevant department even claimed that Rajguru was not eligible for the honour! (This was remedied later in 2013, when the government released a hutatma Rajguru postal stamp. – Editor, Hindujagruti.org)

Maharashtra may have forgotten its brave son, Punjab did not

Punjab government celebrated Rajguru’s birth centenary with as much respect as they would have accorded to Bhagat Singh !

Corruption even in the money sanctioned for the restoring Rajguru’s house !

On the occasion of Rajguru’s birth centenary, the room in which he was born was restored by the government. The restoration cost for this just one room was 6,75,000 rupees. Which makes on think if the government’s policy is to ‘hold the money and let it percolate in corrupt hands’? For restoration of Rajguru’s house, rupees 20,000,000/- were sanctioned. One can only imagine how much of that money will actually end up being used for the cause.

Torture could not break his spirit !

A traitor betrayed Rajguru, who was arrested. The British tortured him in many ways to try to get him to tell the names of his fellow revolutionaries. They made him sit between the scorching hot kilns under the midday day sun, tied him down on ice blocks till his insides turned to mush. To try and break his spirit, the British poured excreta on him. Rajguru underwent all torture but did not disclose the names of his fellow revolutionaries.

Gandhi’s hypocrisy when it came to Bhagat Singh, Rajguru and Sukhdev !

The whole country erupted when the three were sentenced to be hanged. Enraged people rallied around trying to get the sentence reduced but to no avail. On 15th February 1931, Babarao Savarkar (Veer Savarkar’s elder brother) went to Wardha to meet Gandhi. Despite their difference of opinion, Babarao asked Gandhi to demand the release of political prisoners in the Gandhi-Irwin meet and expressed his opinion that there should not be any discrimination political prisoners. Gandhi replied, ‘We should ask only whatever a giver can give”. Babarao promptly replied on that, “In that case it is futile to demand for Independence, because British won’t give it”. Gandhi again commented, “it is mean to ask for the release of such revolutionaries. How can I go against my principle of non-violence?” To this Babarao replied, “If it is so, then asking pardon for Abdul Rashid who murdered Swami Shradhanand, did it not go against your principle of non violence? Show such meanness for these political prisoners also.” While listening to this Gandhi said, “I will just come back” and he left from there.

Facing the death happily with the dream of achieving freedom !

While Bhagat Singh, Rajguru and Sukhdev were handed the death sentence, Shiv Verma, Jaidev Kapoor, Surinder Pandey and others were given a life sentence. The associates with life sentence were to be transferred to another jail. They were allowed to meet for the last time.

In that meeting, Jaidev Kapoor asked Bhagat Singh, “You will be hanged to death at such a young age. Do you feel bad about it?” Bhagat Singh’s reply is an inspiration to all patriots. He said, “by sacrificing my life, I am able to spread the slogan ‘Inquilab Zindabad’ all over the country, I shall consider myself to be fully rewarded. Today I can very well hear crores of my countrymen shouting the slogan, confined though I may be, behind the walls of this cell. I trust this slogan would continue to inspire our struggle for freedom.” The rest could barely control their emotions. Seeing their condition Bhagat Singh said, “Friends this is not a time to be emotional. My journey had come to end, but you have to travel a lot. I am sure you will not get tired, you will not lose hope and you will never stop.”

With these words of Bhagat Singh, all associates were encouraged. They promised Bhagat Singh that they will fight for the freedom till their last breath. Due to sacrifice of Bhagat Singh, Rajguru and Sukhdev the flame of patriotism became more bright in all residents of Hindusthan.

We pay obeisance to this invaluable son of Bharat