Agitation started by Hindu Janajagruti Samiti (HJS) against the anti-Hindu Marathi play ‘Vastra-haran’ for making mockery of Mahabharat will be intensified and taken to all over the State. Shri. Ramesh Shinde, the spokesperson of HJS for the State of Maharashtra made this announcement. Read more »

The owner of ‘Om Pandharpuri Tambakhoo (tobacco)’ told members of HJS that the ‘Om’ sign on the tobacco packet will be removed but it will replace with word ‘Om’. So the denigration of holy sign ‘Om’ does not stop, HJS’ agitations against the company will go on. Read more »

In the special supplementary issue called ‘Time Life’ printed with the issue of Times of India dated 30th December, a picture of a model shows her wearing a dress with ‘Om’ printed on it along with a ‘skull and two bones (a danger sign)’. Read more »

The ‘Sahyadri’ channel under the control of the State Government was toying with a plot to telecast the controversial anti-Hindu Marathi play ‘Vastra-haran’. HJS has been agitating for the past 4 years against the anti-Hindu play. Read more » 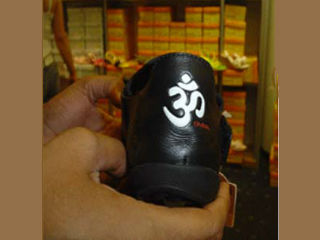 A company had embossed the Holy Hindu symbol ’OM’, on the shoes. This is a cruel joke of Hindu sentiments. People around the world tamper the Hindu symbols due to the utter ignorance of Hindus towards their own religion and lack of respect for it. Read more » 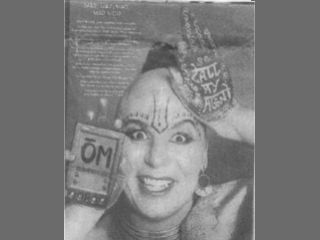 This advertisement shows a ‘palm top’ computer with an ‘Om’ written over it. The person holding it has a contrasting make-up, with an abnormal expression. Read more » 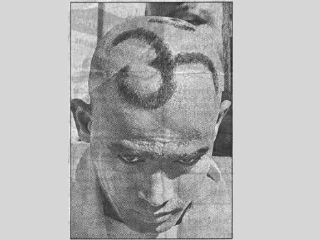 Hindus make fun of their own divine symbols. The whole universe has originated from the Divine ‘Om’, which is also a source of divine energy. Read more »