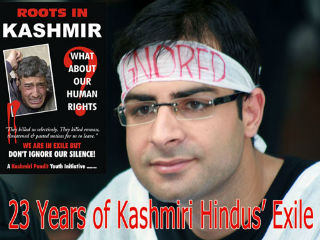 We shall go back to Kashmir; this time not alone but we shall go with all Indians. Smt. Shakti Munshi, the President of ‘Jammu Kashmir Study Centre’, expressed confidently during a program held at Vashi, Navi Mumbai by RSS on the occasion of ‘Kashmir Vilay Divas’. Read more »

On 14th September 24 years ago, jihadi terrorists had forced Hindus to leave Kashmir valley and forced them to convert. An exhibition of ‘flex’ boards depicting the event was held on the occasion of Kashmiri Hindus’ martyr Day at Nimbavali, Titwala. Read more » FACT exhibition is being organised on the occasion of Ganesh Festival in the auditorium of Arya Samaj on behalf of Arya Samaj and HJS. Exhibition depicting the present state of Kashmiri Hindus. Read more » At around 6.30 pm police came to the spot for inspection, after finding the idol in the entrance, police told the organisers that, there will be religious issues over this idol of Shivaji Maharaj so remove it from the entrance. Read more »

Exhibition of books published by Sanatan Sanstha was held in ABVP’s recently held East UP Regional convention. Also HJS held FACT Exhibition on Genocide of Hindus in Kashmir and Bangladesh in the same convention. Read more » It is a commendable mission to create awareness towards terrorism and activities of revolutionaries. It is very concise and nice. Read more »

Bhiwandi (Maharashtra): In a festival organized by ‘Sri Datta Upasana Mandal’ at village Chaudharpada, HJS had organized a photo-exhibition on terrorism, created by FACT. Read more »

Mumbai: An exhibition titled ‘Bitter truth of terrorism’, giving an (VASTAV) actual display of the torture of Hindus from Kashmir and Bangladesh was organized by Hindu Janajagruti Samiti Read more »

HJS organised FACT exhibition on oppression of Hindus in Kashmir at Jalgaon. It got very good response from devout Hindus. Read more »