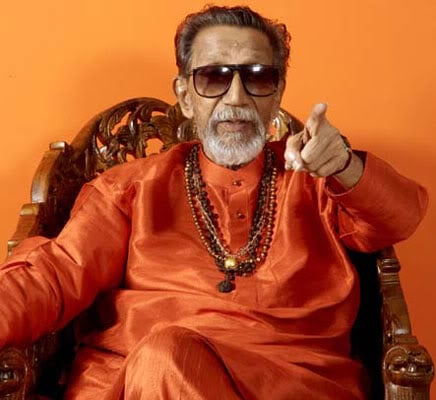 We are the servants of those who follow tradition of eliminating terrorism, said Prasad Vadake of HJS while speaking on the occasion of birth anniversary of Shiv Sena Chief Balasaheb Thackeray at Mulund Read more » As Gautier says, Balasaheb Thackeray was the only man who called a spade a spade and had the pluck to stand by his statements. Today we Indians definitely do need him. But sadly, he is no more! Read more » The two sides of Balasaheb Thackeray and the limited appeal of his aggressive Hindutva notwithstanding, none can deny the fact that the Shiv Sena supremo was one of the last in Indian politics to forcefully and precisely voice the anger and anguish of a section of Hindu majority at the politics of minority appeasement being unabashedly practiced in the country right from the day India got Independence. Read more » Shiv Sena chief appealed to people to overthrow the Congress governments in the state and at the Centre, saying they had ignored crucial issues like rising inflation, electricity shortage, corruption and Indo-Pak relations. Read more »

Locking horns with Sushilkumar Shinde for promising “best possible” security to the Pakistani team during the upcoming Indo-Pak cricket series, Shiv Sena chief scoffed at him saying he should be bestowed the title of ‘Nishan-e-Pakistan’. Read more » “I earnestly appeal to all staunch patriots not only from Maharashtra but from all over Hindustan that wherever matches with Pakistan would be arranged, they should be thwarted. Let us see what happens then !” Read more » If the pentagon of Sonia, Rahul, Priyanka, Robert and Ahmad Patel is thrown out from the politics and from this country; only then you will see good days again. Otherwise, you have to suffer ! : roars Shiv Sena Chief Read more »

‘Eliminate the obstacle in the form of Congress looming large over this country, free people of this country from corruption and scams and let good sense prevail over them so as to permanently immerse Congress’ Read more »