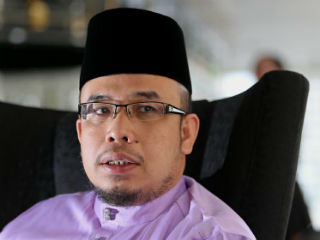 Kuala Lumpur : About 40 Hindu non-governmental organisations and activist groups lodged police reports against the Perlis Mufti alleging that he insulted the Hindu community in his poem.

The groups, who lodged the reports at the Sentul police headquarters yesterday, accused Datuk Dr Mohd Asri Zainul Abidin of sedition and hate speech towards Indians.

The group’s spokesman P. Raja Retinam said Dr Asri, who is popularly known as Dr Maza, needs to be removed from his post.

Dr Asri had posted the poem written in Malay on his Facebook page on Friday.

“Mufti is the highest religious position in the state. How can we have such a person sitting in such a position talking bad about other religions?” asked Raja Retinam when met outside the Sentul police headquarters.

He said the police reports made here were a part of nationwide reports to be lodged against Dr Asri.

In a related development, MIC Youth chief Datuk Sivarraajh Chandran said the Islamic scholar should apologise for belittling the Hindu practice of worship.

“It is shameful to see that a professor who teaches Islamic religion at Universiti Sains Malaysia pen a poem that could stir disharmony and incite hatred among non-Muslims,” he said in a statement.

He said an Islamic scholar should understand and respect other religions.

Meanwhile, the Malaysian Asso­ciated Indian Chambers of Com­merce and Industry has asked the Government to revoke the permanent resident (PR) status given to controversial preacher Dr Zakir Naik to protect the good relationship between Malaysia and India.

Its president Tan Sri Kenneth Eswaran said the Government surely would not want Dr Zakir to spoil the good relationship built between the two countries.

He said Prime Minister Datuk Seri Najib Tun Razak’s recent trip to India has opened up so many opportunities which should not be ruined by one person.

“We are not questioning what Dr Zakir is preaching. If he preaches on Islam, then it is fine.

“But at the same time, we have many Islamic scholars, imam and ulama born here who know our multiracial country better than someone who is from India.

“We live in a multi-racial country. We don’t need a person like Dr Zakir to come and create problems here,” he said yesterday.

Kenneth said Malaysia has been a multi-racial nation for decades and Dr Zakir does not know the harmonious fabric and foundation of the country.

In a Facebook posting on Saturday, Dr Asri said the poem referred to an incident in western India earlier this month, where a Muslim man was killed by “cow protection vigilantes” after being suspected of eating beef.

He said there were plenty of videos and articles online of the violence propagated by these groups merely because they worship the cow and consider it sacred.

“The poem is directed at (Narendra) Modi’s government which allows Muslims to be killed just because they eat beef.

“They are willing to kill their fellow human beings just because of an animal that is consumed widely around the world,” he wrote.

Dr Asri, popularly known as Dr Maza, said that Hindus in this country should not feel offended as they do not worship cows.

“For those who do not worship cows such as in Malaysia, I hope you will not be offended.

“I believe there are many educated people in this country who do not worship cows or consider it sacred, especially to the extent of killing another human being because of it,” he said.

The prominent religious scholar added that those with common sense would reject such beliefs, just as they would reject the labelling of certain castes in India as “pariah”.

He said that the term “pariah” and the caste system did not exist here because Malaysians believed in equality for all.

“This matter has nothing to do with the people here, who could not possibly believe in such nonsense,” he added.

Dr Asri’s poem, which was written in Malay and posted on his Facebook page on Friday, drew negative reactions from the public after it appeared to insult the Hindu community.

The poem was believed to be in response to the criticism of controversial Muslim preacher Dr Zakir Naik, who is wanted in India for allegedly inspiring terrorist activities through his preaching.

Dr Naik’s Islamic Research Foundation has also been declared an unlawful organisation by the Indian government.