As per a report in Dhaka Tribune, eminent researcher & economist of Bangladesh, Dr. Abul Barkat has clearly mentioned ‘there will be no Hindus left in the country (Bangladesh) three decades from now’ in his new book .

‘ “The rate of exodus over the past 49 years points to that direction,” the Dhaka University teacher says in his book ‘Political economy of reforming agriculture-land-water bodies in Bangladesh’ published yesterday. He was addressing the book launching ceremony at Senate Bhaban of Dhaka University.

From 1964 to 2013, around 11.3 million Hindus left Bangladesh due to religious persecution and discrimination, he said. It means on an average 63 Hindus left the country each day and 230,612 annually.

From his 30-year-long research, Barkat found that the exodus mostly took place during military governments after independence.

DU teacher Prof Ajoy Roy said the government grabbed the properties of the Hindus during the Pakistan regime describing them as enemy property and the same properties were taken by the government after independence as vested property.

According to the book, these two measures made 60% of the Hindus landless.’

Most people are aware that Hindus of Pakistan & Bangladesh have been facing injustices & persecution since long, and I started researching for more statistics and qualitative information regarding Hindus in Pak & BD. In the process, I chanced upon this write-up by Anand Ranganathan ‘The Vanishing Hindus of Pakistan – a Demographic Study‘. In this write-up, Anand has provided clear statistics of decreasing Hindu population in Bangladesh : 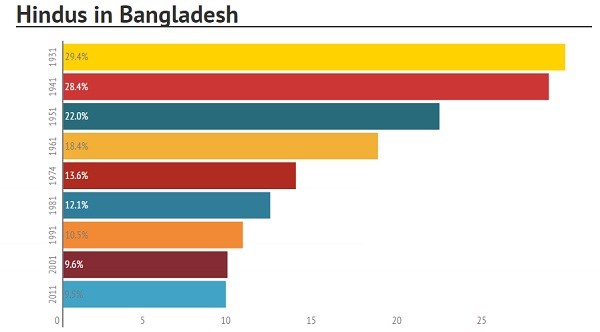 For once I thought about not pointing out my perception of Anand Ranganathan’s write-up, but then things must be brought out not only from Hindu perspective, but qualitatively too. Basically, Anand has ended up comparing the situation in entire Pakistan with only Bhartiya Punjab post 1951 till 1998 or so. Pakistan is not Punjab’s size, it is an entire nation (Bharat is only four times bigger than Pakistan). Though he clearly mentions that Muslims in other states like UP etc did not face persecution, his write-up ultimately legitimizes the ongoing persecution of Hindus in Pakistan. He mentions that ‘Hindu population has faced persecution in Pakistan ever since 1947, but it didn’t vanish – it came home’. Anand forgets to mention that not only Hindus came home but also lakhs of Muslims returned to Bharat post 1951 in the light of Nehru Liaquat Pact, while very few Hindus actually went back to East & West Pakistan, specially West Pakistan post 1951. And ‘home’ is a term that is best left to the native of a piece of land/ region. Just like Hyderabad and UP is ‘home’ to many Muslims, Sindh and Punjab in Pak were ‘home’ to lot many Hindus.

Anand not only forgets to mention Nehru Liaquat Pact, he also forgets to consider the deep implications that ‘Objectives Resolution‘ had on Pakistan’s constitution which was introduced by Liaquat Ali Khan in March, 1949. This resolution turned Pakistan into Islamic state officially, they however called it Islamic democracy. (Not that any sensible human knowing the real history cannot make out that any nation with Muslim majority eventually leads to secondary status for all kinds of minority populations).

Anyway, Anand seems confused if at all to blame Pakistan for persecution of Hindus when he writes that piece in the January of 2015. After all, as many Muslims were persecuted immediately post partition in Bhartiya Punjab too. But what Anand has not been able to realize is, Pakistan persecuted all of its Hindus is just 5 years while Bangladesh has taken a little more time. Well, that’s also a way of looking at the same figures! And by the January of 2015, when he writes that piece, Muslims have grown many fold in many parts of Bharat, but similar reports have not come from Pakistan, i.e. of happy Hindus. Though he has acknowledged the fact that Muslims were not persecuted in all states  of Bharat post partition, he makes sure to call the so called ‘stabilized’ 1.6% Hindus plus Schedule Castes of  Pakistan a ‘tiny’ population. It is funnily amazing to note that Hindu population in Pakistan has remained the static same from 1951 till 1998 and Pakistan has not released any census figures for almost two decades now.

Moving on, in spite of the insensitive tone of Anand’s article, there’s nothing to disagree with it except for one thing – the article forgets to mention return of many Muslims post Nehru Liaquat Pact and fails to mention ongoing injustices to Pak Hindus in clear terms vs very high growth of Muslims in Bharat by the time he chose to write that piece. For example, he writes :

Although factually correct, the above statement is misleading and doesn’t tell the real story, which is that the Muslim population was “decimated” because of an overwhelming outflow around the time of partition itself. A truer picture emerges only when we compare the 1951 population numbers with those that were revealed during subsequent Census counts. This holds as much for the Muslim numbers for Indian Punjab as it does for the Hindu numbers for Pakistan.

The biggest flaw of the above comparison drawn by Anand is that, he compares a mere Gurdaspur district of Bharat with entire Pakistan. (Of course, the great Hindu magnanimity invariably plays its part in most of us). Did the Hindu population of Sindh in Pakistan spill over to other states of Pakistan post 1951? No. Did some Hindus of Pakistan gradually return to Pakistan post 1951? No. We shall soon see the figures of Muslim growth in what was called undivided Punjab of Bharat, which is mostly today’s Punjab, Haryana and Himachal Pradesh.  Moreover, post partition it was a war like situation. In the heat of a war like situation between two countries, it is obvious that there will be casualties on both sides. Why was Punjab in Bharat considered separately? What if Bharat would have retaliated by persecuting millions of Muslims living in other states too? What did we gain as a bigger country? Nothing. We have only been giving post 1951.

Honestly, it is futile to differentiate between Pakistan & Bangladesh in terms of persecution of Hindus, because of two main underlying reasons – history and Islamic ideology.

Muslim Population in Bharat has grown from 9.8% in 1951 to 14.23% (officially) in 2011. While Bharat has seen multiple news reports about Hindu Refugees from Pakistan and Bangladesh in recent times, how many Muslim refugees have gone back to Pakistan crying victimization in Bharat?

Anand gives the figure correctly for Muslims in Bhartiya Punjab : 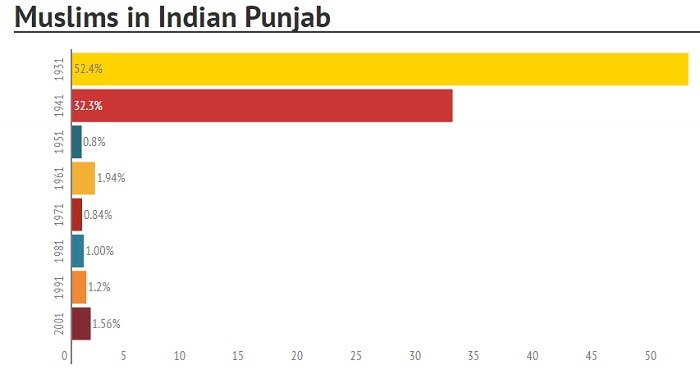 Now ‘Indian Punjab’ that time was today’s Haryana, Punjab and Himachal Pradesh mostly. While Pakistan’s Hindu population has ‘stabilized’ to 1.6 % plus Schedule Castes, let us see how Muslims have grown in these 3 states of today : 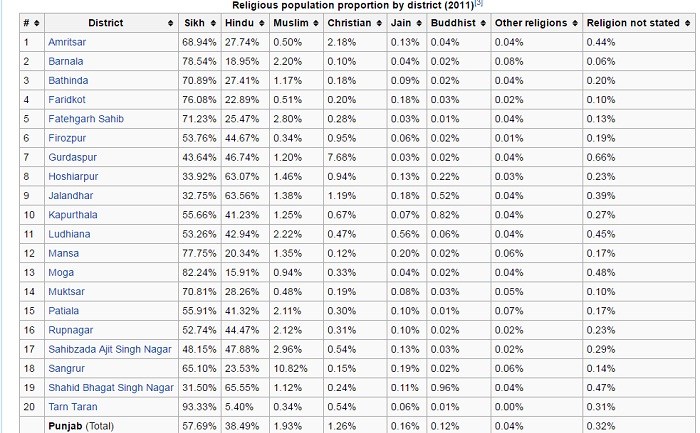 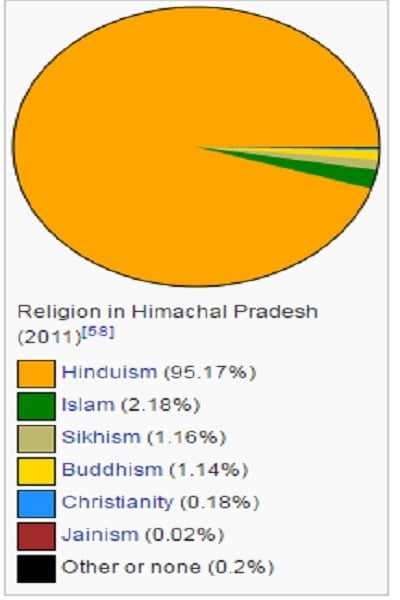 Whoa! From 0.8% in 1951 to more than 11% Muslims in 2011 in undivided Punjab. Is this growth possible only by breeding? Every state of Bharat has seen growth in Muslim numbers. It may be noted that no religion in Bharat dares to fudge its numbers simply because of reservation laws, that provide advantage to Schedule Castes, Scheduled Tribes and Backward Classes. As Abrahamic doctrines boast of ‘no casteism’ in Bharat, these laws do not apply to Muslims and Christians (though the minority religions almost control their organizations freely and even get preferences in certain sectors like education which is driving Hindu enterprises away from those sectors gradually, is spite of being a majority here). Hence it is usually said, especially about Christians, that their numbers are reported far less than they actually are. It is a separate issue and there are references available of Christian leaders themselves claiming far more population than official figures.

Indeed, breeding among Muslims is higher because contraception is not accepted by many of them, because it is said that it is mentioned as unacceptable in their religion. But this kind of growth is not possible by breeding alone. It is easy to get references that Muslims returned from east Pakistan, along with Hindus, post Nehru Liaquat Pact. Here are some references from Partha S. Ghosh’s book ‘Migrants, Refugees & The Stateless In South Asia‘ : Just in about 4 months, 3 lakh Muslims returned to North-East Bharat post Nehru Liaquat Pact! Everybody knows Muslims are still ‘returning’ from Bangladesh. Of course, many Hindus returned too. A cached thesis / paper at Shodhgana, which I couldn’t access fully, speaks about this too : 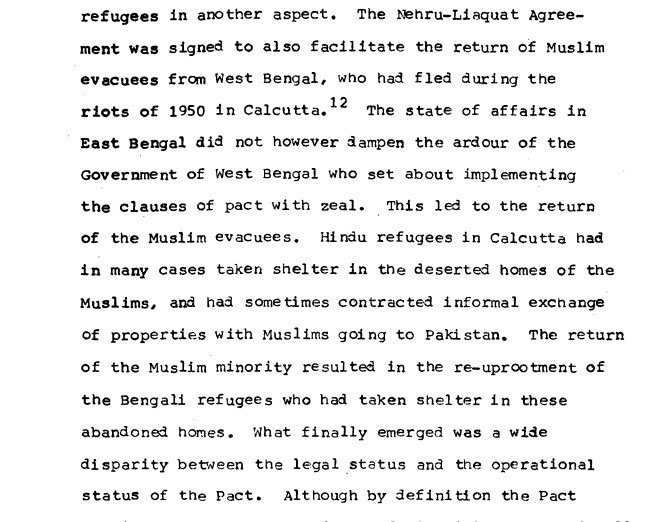 It is more difficult to find references of Muslims returning to undivided Punjab and North Bharat. It needs more hours of research and right resources. However, I could find few references in the above mentioned book of Partha S. Ghosh, though our elders have always told this and we know it by word of mouth :

It is estimated that at least a million Muslims returned to Bharat post Nehru Liaquat Pact, and they have only grown in Bharat post 1951 in overall sense. And it is also totally true that persecution of Hindus has been going on and continues in Pakistan. If numbers are not reflecting it, it is not being reported properly. The injustices to Hindus in Pak & BD are also severe in qualitative sense – their quality of life, prosperity, freedom and ease to practice their religion happily. The justice is totally missing in holistic terms. Hindus could not get their marriages registered in Pakistan till now! Many Hindus cannot cremate bodies of their dead, they have to bury those. There was no law against forced religious conversion of Hindus, only now Pakistan’s Sindh province has outlawed forced conversions which is also facing protest from Muslim extremists. It is estimated that about 1000 Hindu girls are forcibly converted to Islam annually in Pakistan.

The plight of Hindu Refugees from Pakistan (and Bangladesh) is not hidden from anybody. They are still coming from there and they don’t want to go back. There are many colonies of Hindu Refugees (from Pak & BD) in Bharat. The lowest socio-economic classes of Hindus suffer most injustices there.

Clearly, the battle doesn’t lie elsewhere, it lies everywhere where Hindus are in minority!