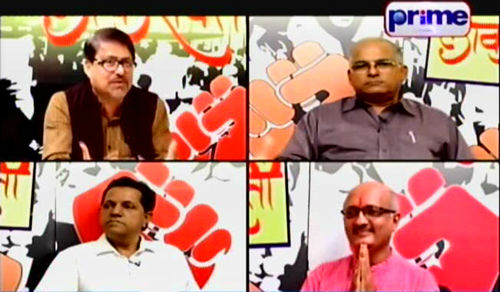 Panaji : Prime Minister Narendra Modi imposed restrictions on funds received by voluntary organizations from abroad and hue and cry was made about intolerance in this country; one among them was Dr. Ganesh Devi, who has organized this ‘Parishad’. Datta Nayak, the convener of this ‘Parishad’ from Goa has written an article on Brahmins; stooping to very low level in his criticism. It is therefore, certain that there would be only one-sided criticism on Hindu Dharma in this conference and therefore, Hindu Janajagruti Samiti (HJS) has opposed this conference, explained Dr. Manoj Solanki, Goa State Coordinator of HJS during discussion session held on ‘Prime’ TV news channel.

This demand has been made in lawful manner and within the framework of the Constitution; therefore, nobody needs to claim that such demand would violate freedom of expression, said Dr. Solanki. HJS had taken objection to hold ‘Dakshinayan Parishad’ since the purpose of holding the conference was only to criticize Hindus by making false claims of intolerant atmosphere created in this country. The enraged pro (re) gressive factions therefore, tried to pressurize Dr. Manoj Solanki; but he refuted all allegations during the discussion sessions held on local cable news channel known as ‘Prime Time’ and foiled the attempts of intimidation.

Under discussion program titled ‘Lokmat Lok-shakti’ held on ‘Prime’ news channel, the program-host and the Editor of ‘Dainik Lokmat’ Raju Nayak who is always talking against ‘Hindutva’; Mohandas Lolayekar, the Vice President of ‘Dakshinayan’ conference from Goa, secular journalist Prakash Kamat and Dr. Manoj Solanki, the Coordinator of HJS participated in the discussion program on the topic whether ‘the opposition to proposed Conference was right ?’