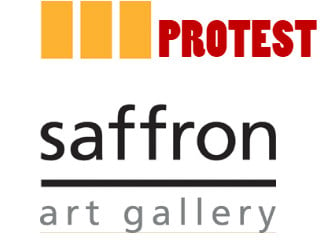 Saffron Art Gallery will be conducting an online auction titled ‘The Ties That Bind: South Asian Modern and Contemporary Art’ from 30th November to 1st December 2016 on its website saffronart.com. There will be an entire section devoted to MF Husain.

Anti-National M.F. Husain has hurt the Religious and National sentiments of crores of Hindus because of his blasphemous painting of Hindu deities and naked Bharat Mata. In addition. There are numerous complaints lodged against M.F. Hussain for creating disharmony between different religious groups, selling obscene material and disturbing National integrity.

HJS now requests all readers to appeal against this auction peacefully and lawfully by either writing an email or calling the numbers below requesting to remove M.F. Hussain’s paintings from upcoming auction.

Devout Hindus are registering protest on the following contact details