Spontaneous support of the public at Districts Thane and Panvel !

Thane : Embezzlement of crores of rupees by some ex trustees of Shri Siddhivinayak temple trust at Prabhadevi in Mumbai, a place of faith for millions of people, has come to light recently. With a view to create awareness to protest against these corrupt persons and to make the Govt. take stringent action on the guilty, a signature campaign was organised on 10th March by the Anti-corruption Action committee of Shri Siddhivinayak Temple Trust outside Thane, Dombivali and Ambarnath railway stations. Hundreds of devotes supported the campaign and showed their determination to unite against this corruption in the temple.

Be active in opposition to corruption from today ! – Shri. Narayan Hindurao, advisor of the Vitthal Mandir, Ambarnath 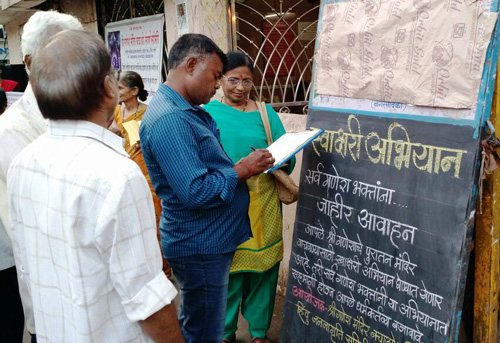 1.Shri. Pradep Nawar and Shri. Anil Bhoir from Ambarnath explained the topic to people and invited them to give their signatures.

2. Adv. Mahesh Shelar, took signatures from people by creating awareness in them.

3. Despite being sick, Smt. Jayashree Mhatre from the Dharmashikshan class, continued taking signatures till the end.

6. Sou. Karnik, reader of DSP had participated in the movement.

7. Many asked whether such a campaign was held in Thane at some other place also.

8. Some people in Thane helped in collecting the material after the campaign.

Devotees sighing in the movement

Panvel : Signature campaign opposing the corruption was held outside the Panvel railway station on 10th march in the evening. Good response from the public for that. 50 Dharmabhimani participated in this campaign. All were giving slogans. They were saying, “No one should play with our sentiments. We will never tolerate misuse of our money donated with faith. They must be punished severely.”

Shri. Phanish Oza – Hindus need to unite, they need act collectively, then only such a thing will stop. People are not proud of their Dharma; it has to be awakened.

Adv. Neelesh Garde, Vichumbe – It is good that you organise public movement; we have to file an appeal against them, then only the action can be taken. I can help you.

Shri. Murlidhar Bharati, Panvel – No one should play with our sentiments. We are with you all. We must stop this.

Devotees have the constitutional right to know the account of each and every pie of the money coming to the trust ! – Adv. Vivek Bhave

Kalyan : National Hindu Movement was held recently at Lal Chowk area near Ganapati temple. At that time a demand was made stating that there criminal offence should be registered on those who are guilty in the embezzlement of Shri Siddhivunayak Mandir Trust. While addressing the gathering Shri. Vivek Bhave of Hindu Vidhidnya Parishad made this statement. If the trust is misusing the donated money of devotees offered with faith, then criminal cases should be registered on them as per the law and cheating of Ganesh devotees should be stopped. From RTI it is learnt that some trustees visit Goa as a pleasure tour but name it as ‘Study tour’ and spend 12 lacs of rupees. If strict action is taken against them then others too will get a slap. We will continue this fight till all the guilty are punished lawfully.

The reason behind this state of affairs is the previous Congress Govt.’s taking temples into their custody. The donations collected in the temples are given in charity to other faiths. Govt. takes only Hindu temples into its custody. People of other faiths being alert oppose the Govt. concerning their places of faith, hence the Govt. does not dare do anything like this.

Action Committee’s volunteers created awareness among the citizens regarding the corruption in the temple and invited them all to raise their voice against those guilty. At this time hundreds of devotees signed the representation having the demands given ahead