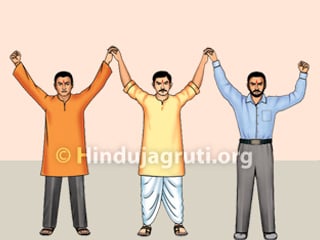 Hindu Janajagruti Samiti (HJS) is a registered NGO in India working for Hindu Dharma and also for society and national welfare. The Samiti is active throughout the world, educating people about Hindu Dharma in a scientific way, campaigning against malpractices done in the name of Hindu Dharma and solving problems related to the misrepresentation of Hindu Dharma. For further details please refer to our website www.HinduJagruti.org.

We at Hindu Janajagruti Samiti have received several complaints from devout Hindus regarding the insulting picturization of a Hindu Guru, in the advertisement “Ask Greenply – Dhongi Baba Ka Non Veg”, which is a very offensive and degrading way to market and sell your product- plywood.

We are sending this appeal letter to notify you regarding the humiliating and despicable representation of a Hindu Guru as presented in the Ask Greenply advertisement. In Hinduism, a Guru is highly revered and is considered to be the supreme authority in knowledge and spreading spirituality. The Guru is accorded the highest reverence, and is equated with God. In Bharat, the Guru-Shishya tradition has been in existence for thousands of years and has played a significant role in the preservation of Hindu Dharma and the passing of knowledge and traditions from one generation to another. It has also contributed greatly to the survival and continuity of Hinduism even in the most turbulent times.

However, your advertisement has denigrated the perception of a Hindu Guru by presenting Him as a phony religious spiritual guide eating non-vegetarian (Tamasik) food. This leads to insulting and tarnishing the noble image of a Hindu Guru and Hinduism.  The greatest gift of God to human beings is a Guru, Who guides one to the ultimate happiness and Bliss, that is, Moksha. All the disciples and devotees as well as seekers are deeply hurt by such an advertisement.

You may have made this advertisement unknowingly; however, hurting religious feelings leads to an offence as per the Indian Penal Code section 295A.

We at Hindu Janajagruti Samiti have campaigned to educate people about such denigration that occurs through various products, and after learning about the denigration, many companies have removed the Deities’ pictures from their products. Please refer to our website https://www.hindujagruti.org/hjs-activities/stop-adharma-practices to see our ongoing and successful awareness campaigns against the denigration of Hindu Dharma.

We urge you to consider the above points and remove the Greenply commercial – “Ask Greenply – Dhongi Baba Ka Non Veg” immediately from the electronic media including YouTube to prevent further denigration of the highly revered image of a Hindu Guru.