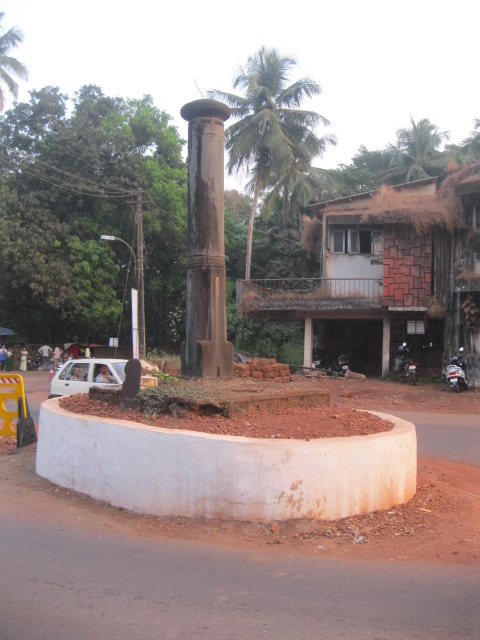 Panaji (Goa), 22 December – The ‘Haat Kaatro Khaamb’, a memorial at Old Goa, is the symbol of the sacrifice of lives of citizens of the State, for their self-respect. Hindu Janajagruti Samiti (HJS) has made a representation to the Chief Minister, Shri. Parsekar today demanding to declare ‘Haat Kaatro Khaamb’ at Old Goa as a historical monument and conserve it.

The representation further states that, the ‘Haat Kaatro Khaamb’ pillar is a witness of severe atrocities meted out to Hindus in the State during the Portuguese regime; but as of date there is not even a board telling the history behind the pillar. The ‘Haat Kaatro Khaamb’ is not a monument to be ashamed of for the citizens of the State, on the contrary it is a monument to be proud of, as a symbol of the citizens who sacrificed their life to preserve their self-respect. HJS has made the following demands in the memorandum. Along with conserving the ‘Haat Kaatro Khaamb’ as a historical monument, there should be fencing around it for protection and a brass or stone board giving detail information about the pillar. Assistance can be taken from renowned historians and geniuses in Goa to prepare the information board. The Government should maintain and protect the pillar and also information about the pillar should be given in the tourism map of Goa. Copies of this representation will be forwarded to the Central minister Shri. Shripad Naik, Minister of Archives and Leader of the Opposition in the Goa State Assembly Shri. Pratapsing Rane.