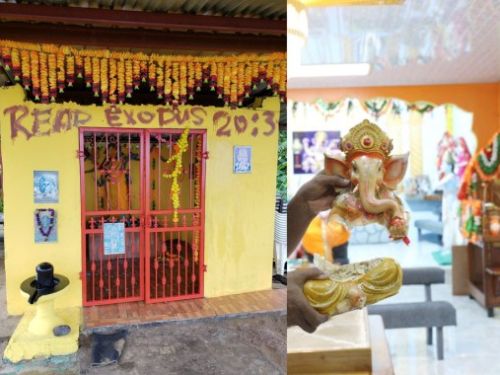 As Hindus across the world are celebrating Navaratri and Durga festivals, two Hindu temples were vandalised and desecrated this week in Trinidad in the Caribbean nation Trinidad and Tobago. The temples which were attacked are located in Couva and Penal towns on the island.

On September 28th, a Kali Mata temple in Carli Bay in Couva was vandalised and desecrated by unknown miscreants. The vandals had broken into the temple in the night and damaged the idol of Goddess Kali. They also smeared olive oil on the idol.

Exodus is a book in the Holy Bible, and in chapter 20 of the book, verse 3 says, “You shall have no other gods before me.” And verse 4 in the same chapter says, “You shall not make for yourself an image in the form of anything in heaven above or on the earth beneath or in the waters below.”

The message indicates that some Christian fanatics attacked the temple.

Pundit Satyanand Maharaj said that the incident took place after members of the temple left for their homes after completing Navaratri services. He said, “Today they woke to find the mandir broken into and their murti or consecrated image of the Divine Mother destroyed and smeared with olive oil! A warning from Exodus 20:3-4 was painted on the outside. A report was made to the Couva Police Station, however, no receipt for the report was issued by the TTPS.”

The temple priest further added, “While Trinidad and Tobago is a multi-religious country where we all enjoy freedom of worship, it seems that some people are bent on destroying the peaceful co-existence that religious groups enjoy. This act of violence under the guise of Christianity must be condemned by all people of Faith.”

However, the worship in the temple continued as devotees attended the temple yesterday and sang devotional songs outside the defaced temple. Many regular devotees shed tears seeing their idol smashed, as they had contributed to building the temple.

The attack on the Kali temple in Couva took place just a week after a Ganesh Mandir was vandalised in Penal on the night of 22 September. Worshipers at Lakrani Ganesh Mandir at Gopie Trace discovered on Friday morning that the temple was broken into from the back door. It was found that a Ganesh murti was broken, clothes were pulled out from other murtis, and a cigarette butt was left behind. The vandal had also drunk milk kept in a fridge in the temple and ate some nuts kept there.

A speaker box worth between $3,000 and $4,000 was also stolen, which was mounted on a tripod. A flash drive with religious information was also missing, but later it was found. CCTV footage from that night showed a man walking along the road with the speaker box from the temple, indicating that it was the job of only one man.

Temple’s vice president Rekha Cassie, who first discovered the vandalism, said, “We saw the temple was broken into through the back door. The person kicked open the door, burst up the locks and entered the temple, ransacked the temple, came inside, searched the murtis between the clothes to see if there was money hidden there, damaged our donation box and took one of the speakers from the temple.”

The police suspect that the man had broken into the temple with the intention of stealing money offered by devotees, as he might have visited the temple earlier and saw people offering money as part of religious rituals. But he didn’t get any money as the temple management does not keep money in the temple in the night. It is also suspected that the attacker broke the Ganesh Murti thinking money could be hidden inside it.