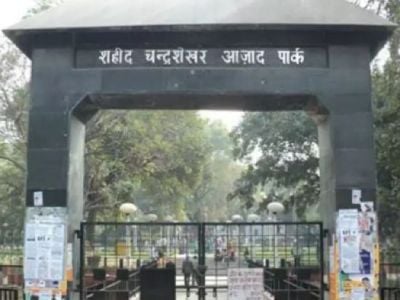 Days after Tamil Nadu Waqf Board claimed ownership of 7 Hindu-majority villages and a 1500-year-old temple in Tiruchirappalli, it has come to light that the Uttar Pradesh Waqf Board has now staked its claim on the historic Chandrashekhar Azad Park in Prayagraj.

As per an exclusive report by Times Now, a petition was filed before the Allahabad High Court stating that the Waqf Board backed the illegal construction of mazars and mosques on the premises of the public park.

In its defence, the Islamic body claimed that the mosque has been in existence in the park for about 200 years. A local told Times Now that ‘devotees’ offer prayers, candles and flower petals at the Mazar. “It is an illegal construction. Although part of the Mazar was damaged, they (Muslim devotees) put up a tent to keep it operational,” he said.

No end to #Waqf land claims: #Waqf Board claims public park dedicated to martyr Chandrashekhar Azad in #Prayagraj, alleges park land for mosque and mazar.@Amir_Haque and @PriyaBahal22 with more on the claims. pic.twitter.com/ysJhcftKXj

In October last year, the Allahabad High Court ordered the immediate removal of the mosque and a Mazar constructed illegally inside the Chandrashekhar Azad Park at Prayagraj. “We want the park free of all encroachments,” the Court said in its order while hearing a petition filed by a petitioner named Jitender Singh.

The petitioner stated that the existence of this park was under threat as some members of the Muslim community had illegally constructed artificial graves and were trying to convert a structure into a mosque. He added that the accused wanted to convert the park into a graveyard and mosque.

While passing the order, a Division Bench of Acting Chief Justice Munishwar Nath Bhandari and Justice Piyush Agarwal directed all illegal encroachments on this historic park that came up after 1975 must be removed within a span of two days.

Later, the Prayagraj Development Authority demolished 3 tombs and 14 graves overnight on Friday from Chandrashekhar Azad Park. The authority acted on the orders of the Allahabad High Court to remove encroachments from the public park.

However, some illegal structures including the mosque continue to remain within the park premises. It must be mentioned that freedom fighter Chandrashekhar Azad sacrificed his life for the nation on 27 February 1931 at the said park when he was just 24 years old.