Was the Censor Board sleeping till the trailer that ridicules Hindu Deities is made public? A trailer of Ajay Devgan starrer film ‘Thank God’ has been uploaded on YouTube. This cinema shows Deity Chitragupta, who settles the account of merits and demerits of Hindus after death and Deity Yama, who takes away the soul of an individual after death, in modern attire. Cheap jokes have been mouthed in these characters. We will never tolerate the ridiculing of Hindu Deities Chitragupta and Yama under the name of freedom of speech. Was the Censor Board sleeping, till this trailer was made public? HJS has demanded that the Censor Board should not give any certificate to this film, and has warned that it will take to the streets to oppose the film if it is released. The Samiti has also asked the Union Home Ministry to ban this film as it hurts the religious sentiments of Hindus.

This film depicts Ajay Devgan in suited-booted attire as modern Chitragupta and the Yamadoot (Messengers of Deity Yama) are addressed as YD in short-form. As per Hindu Dharma it is believed that once an individual dies, Deity Chitragupta settles his account of merits and demerits. Despite this belief, actor Sidhharth Malhotra is shown being taken to the Court of Deity Chitragupta though he is not dead in the film. There, Deity Chitragupta is shown playing ‘Game of Life’ with him. In a nutshell, in the name of comedy, a very sublime concept in Hindu Dharma is presented in an incorrect and objectionable manner and thereby, ridiculed.

Earlier too Hindu Dharma, Deities, Sages & Ascetics have been targeted through many cinemas such as PK, O My God, Singham Returns, Tandav and through web series. Jokes are made about Hindu customs as well as traditions and hatred is generated about them in the minds of the people. To stop all this Union Government has to immediately make stringent laws. So also, there should be representatives of all religions on the Censor Board, who will take care to ensure that the religious sentiments of people are not hurt. This demand was made by Hindu Janajagruti Samiti. 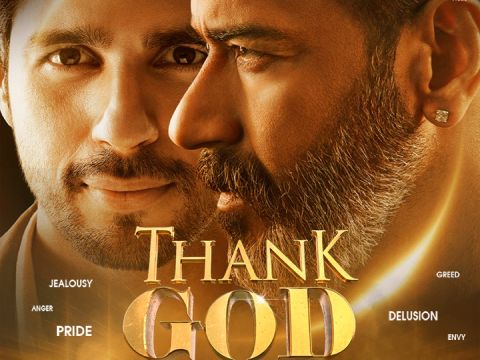 New Delhi: Ajay Devgn, Sidharth Malhotra, and Rakul Preet Singh’s upcoming film ‘Thank God’ has landed into trouble just a few days after the trailer of the film was released.

According to IANS, a case has been filed against the film’s director Indra Kumar, actors Ajay Devgn and Sidhartha Malhotra, in a Jaunpur court by lawyer Himanshu Srivastava. The petitioner’s statement will be recorded on November 18.

As per the IANS report, the petitioner feels that the film’s trailer mocks religion and has hurt religious sentiments.

In his petition, Srivastava said that Ajay Devgn, wearing a suit, is seen playing Chitragupta and in one of the scenes he is seen cracking jokes and using objectionable language.

“Chitragupta is regarded as the Lord of Karma and keeps a record of a man’s good and bad deeds. Such depiction of Gods can create an unpleasant situation since it hurts religious sentiments,” the petition said.

In the film, Ajay Devgn is portraying the character of the Hindu deity Chitragupta while Sidharth is playing a common man whose actions will be assessed by Ajay’s character in the film.

Chitragupta is the god assigned with the task of keeping complete records of the actions of human beings and rewarding them according to their karma. Upon one’s death, Chitragupta decides whether they go to heaven or hell.

Recently in an interview with Bollywood Hungama, Rakul talked about the film and said, “It’s comedy and (has) a lot of emotion. I just happened to see the film about two weeks back and I walked out with the feeling that we really wanted the audience to go through (it). It touches your heart, and it’s like a Munnabhai-(MBBS)-meets-Oh-My-God space; not that it’s got anything to do with that but that’s the space. I think it’s entertaining and I think people will hopefully go to the theaters to watch it”.

The film has been directed by Indra Kumar, who has earlier directed films like ‘Masti’, the Aamir Khan and Madhuri Dixit Nene-starrer ‘Dil’, ‘Ishq’ and ‘Raja’.

The film is set to hit the screens on October 25.