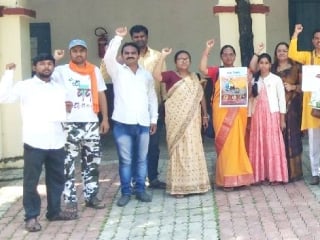 Amravati : Many incidents of Hindu girls being abducted and sexually abused have come to light in the last 8 days in District Amravati. All accused are religious fanatics. Incidents of Hindu girls being lured into love jihad, sexually abused, and forced to convert are also on the rise. Therefore a Hindu Rashtra jagruti Andolan was held by the Ranaragini Wing of Hindu Janajagruti Samiti (HJS) on 11 th September in Rajkamal Chowk to demand the passage of an anti-love jihad law, and law banning religious conversions.

Demands made in the Andolan

2. Establishing state and central level special cell of Police to handle or investigate cases related to love jihad. Registering crimes under ‘Love jihad’ in such cases.

3. Centre must investigate the overseas financial assistance to the Love Jihad, trafficking of girls and their subsequent exploitation for terror activists, and devise as well as implement strict measures to uproot this conspiracy of Love Jihad

4. If victims in such cases happen to be married, then she should be allowed to divorce immediately if she so desires. In such divorce cases there should be a provision that half the property of the accused and his relatives to be given to the victim.

Retd Justice Chandrashekar Dharmadhikari commission had, on 29 Nov 2014, recommended to the then Congress government that an anti-conversion law be implemented. Hence Maharashtra also should pass very strict Anti-conversion Act as it is the need of the hour. Ordinance to that effect should come into force and the Law should be passed immediately.

After having passed these resolutions slogans protesting ‘Love jihad’ echoed in the venue.

Hindu parents and girls should be about the conspiracy of ‘Love jihad’ – Mrs Anubhuti Tavlare, Ranaragini Wing

A religious fanatic employed as a driver of an ambulance in Dharani in Amravati, lured a highly educated young Hindu girl and had detained her in his house for 3 days. Since she got sick she was admitted to the District General Hospital. They had been married illegally.

Hindu girls and their parents should not view this is a ‘love marriage’ and should be alert not to fall prey to this conspiracy. Hindu girls should abide by Dharma and learn self-defence to save themselves from such incidents.