Kolhapur : Kolhapur Municipal Corporation had installed a conveyor machine in the Irani mine for immersing Shri Ganesh idol. The people were being made to place the idol on the belt which would then dump the idol into the mine water. Hindu Janajagruti Samiti and other Hindu organisations had opposed this kind of immersion which has no scriptural basis. The Hindu organisations submitted a petition in that regard to the Police Superintendent and thereafter held a press conference demanding strict action against those who made these arrangements thereby hurting Hindu sentiments. The administration has compelled the Kolhapur Municipal Corporation to withdraw the conveyor belt system for the remaining days of Ganeshotsav.

Hence, Mr Kiran Duse, on behalf of Hindu Janajagruti Samiti and all Hindu Organisations, has thanked the Municipal Administration and the Government for their cooperation by taking stand in favour of the representation and valuing the Hindu sentiments.

Demand by all Hindu organisations in a press conference at Kolhapur

Kolhapur : Ganeshotsav is a religious festival involving great faith and devotion. Shri Ganesh arrives and people worship the Deity with great devotion following religious rituals and traditions. Therefore it is essential that the immersion of the Shri Ganesh idol is also ritualistic and as specified in Dharma Shastras. Even though there is no shortage of water, the Kolhapur Municipal Corporation is trampling on the religious sentiments of the Hindus. In a bid to portray themselves as modern and progressive they are acting in an arbitrary manner. Therefore, a demand was placed on behalf of all Hindu organizations in a press conference on 8th September in Kolhapur that legal action should be taken against those who have hurt the religious sentiments of Hindus by arranging a conveyor belt for the immersion of Shri Ganesh idol, a method which has no basis in Hindu shastras.

1. If the Municipal Corporation wants to use the conveyor belt for immersion, then it should be used for coffins or someone else’s disposal, we are against using it for the immersion of Shri Ganesha idol!

2. Many devotees could not immerse the idols they had worshipped in the Panchganga river despite their wishes due to the municipal corporation banning it by placing barricades on the banks of the river. In some surrounding villages of Kolhapur district, devotees immersed 100% of Shri Ganesha idol in flowing water. This means that the devotees want to do immersion rituals and the administration cannot impose the artificial tanks decision on the devotees.

3. A ‘video’ showing a Shri Ganesh murti which was taken as a donation from devotees being thrown into the Irani mine is being circulated. This is an insult to the religious sentiments of the devotees. BJP MLA Shri. Nitesh Rane has also tweeted that this method is inappropriate. The devotees had in good faith donated their beloved idols to the administration, they also immersed the idols in artificial tanks instead of flowing water. Hence strict action should be initiated against those who are throwing such idols into the mine. Also devotees of Ganesha should not be hindered from immersing the idols in the natural water bodies as per the customary religious practices and traditions. came

1. A journalist brought to the notice of the attendees that over the last 20 years, the Hindu Janajagruti Samiti has been raising awareness for the design of Shri Ganesh idol to be as per scriptures as well as the idols to be of shadu-clay.

2. The journalists asked why the Samiti opposes mechanised immersion when it is being lauded across the country. Mr Kiran Duse took a firm stand and reiterated that ‘Immersion in this way is not according to the Shastra’. (It is due to lack of education and awareness of Dharma among Hindus that this ‘perversion’ of mechanical immersion is being appreciated ! – Editor)

Petition submitted to the Superintendent of Police by all Hindu organisations 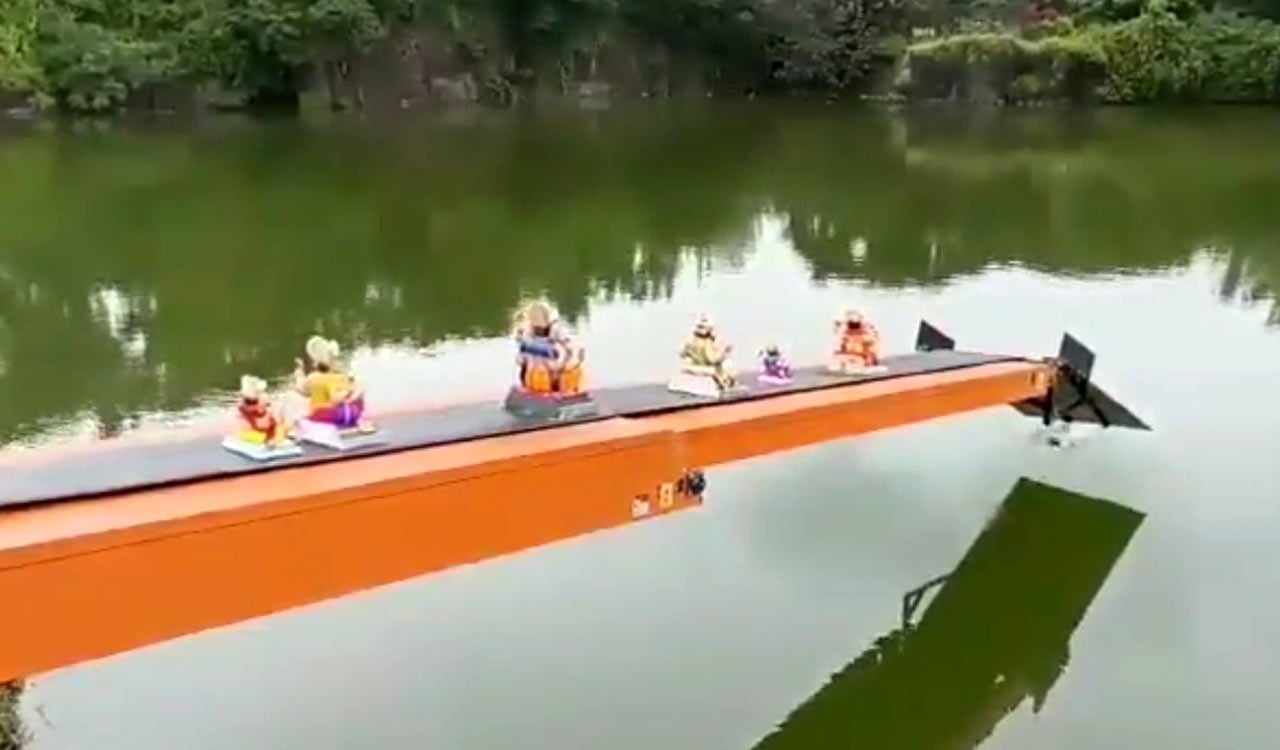 Kolhapur : Shri Ganesh idols that were worshipped at homes are being immersed in the Irani mine here using a conveyor belt device. The idols are placed on the belt which then unceremoniously dumps them into the water in the mine. This is absolutely against the Dharmashastra. In a video, Shri Ganesh idols collected from the devotees by the Municipal Corporation were seen being thrown into the Irani mine. This has hurt the religious sentiments of the devotees. So, all Hindu organisations submitted a petition to the Superintendent of Police here on 7th September demanding stringent action against those who had implemented the use of the conveyor device.

1. Despite no compulsion from Courts, Green Tribunal or the Administration on the immersion of Shri Ganesh idol, the Kolhapur Municipal Corporation was denying Hindus their religious rights by banning the immersion of idols in the Panchaganga River, and by compelling devotees to immerse them in Irani mine or in artificial tanks.

2. While immersing Shri Ganesh idol, traditionally it needs to be dipped thrice in water. After the immersion, a little mud is brought home and worshipped; but because of the conveyor device, this tradition could not be followed. Thereby the administration is playing with Hindu religious sentiments. The immersion of Shri Ganesh idols is a religious issue. Before implementing this system, did the Municipal Corporation discuss this with anyone who is an authority in Hindu Scriptures ?

Devout Hindus who were a part of the delegation

Immersion of Shri Ganesh idols in a mine using a conveyor belt !

Kolhapur Municipal Corporation is compelling devotees to immerse their idols in tanks at various places by banning the immersion in the Panchaganga River. Under the leadership of the then Guardian Minister Satej Patil, Rs 80 lakhs were sanctioned by the District Planning Committee for the conveyor device and the immersion is being carried out through that. The Administration said that it was an experiment. The Panchaganga river is blocked with barricades, hence there is no alternative available to the devotees other than immersing the idols in artificial tanks.

Demands in the petition

1. Strict action against all who went against the Hindu scriptures and spent lakhs of rupees for a conveyor system

2. Action against those who threw the donated idols in the Irani mine

3. Unrestricted immersions of idols should be allowed in natural water sources for the next few days

While discussing the matter with the devout Hindus Shailesh Balkavde, Police Superintendent, Kolhapur, said that, the Municipal Corporation was not responsible for this act; some mischief mongers from the Grampanchayat area might be responsible for that. An appropriate inquiry will be held and action will be taken. He stated that they were at the venue till 3.30 a.m., everything was fine then. Police administration will take the necessary action.

He also said that they would hold a meeting soon after Anantchaturdashi to plan the strategy for next year’s immersion by constructing a huge pond in the city with the provision of ‘ghat’ for immersion. They would encourage the potter-community to prepare idols with shadu clay.