Bengaluru : HJS delegation submitted a memorandum to Telangana Governor through Bengaluru Deputy Collector and the Additional Deputy Commissioner of Bengaluru Smt. Anitha Lakshmi to provide immediate armed security cover to MLA T Rajasingh and stringent action against those who have been issuing death threats to him.

HJS delegation submitted a memorandum to District Collector of Dhanbad, Jharkhand to provide immediate armed security cover to MLA T Rajasingh and stringent action against those who have been issuing death threats to him.

HJS delegation submitted a memorandum to Additional Collector of South Goa to provide immediate armed security cover to MLA T Rajasingh and stringent action against those who have been issuing death threats to him.

A delegation of Hindu Janajagruti Samiti (HJS) and activists of other Hindu organisations met the Resident  District Collector Shama Pawar here. The delegation handed over a petition seeking immediate armed security cover to MLA T Rajasingh and stringent action against those who have been issuing death threats to him. MLA T Rajasingh of Goshamahal (Telangana), a devout Hindu, had been arrested over allegedly defamatory remarks.

Sangola (district Solapur) : A memorandum addressed to the Governor, Raj Bhavan, Telangana was given to Naib Tehsildar of Sangola Kishore Badve demanding immediate armed security for MLA T Rajasingh, and stern action against those who issued death threats. 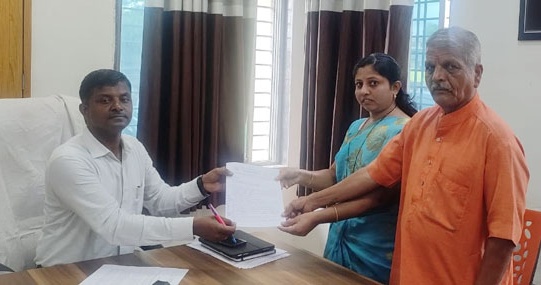 Khamgao : Devout Hindus from Khamgao have demanded the Government provide armed security to Goshamahal MLA T Raja Singh and also demanded action against those issuing death threats to him. A petition with these demands was handed over to Tahsildar Atul Patole in Khamgao. Mr Ajay Khot and Mrs Priti Nagpure of HJS were present.

The petition also stated that the Telangana Government is acting in a biased manner, and it has made it difficult for T Rajasingh to get justice; so the cases should be transferred to Maharashtra, Karnataka or Goa.

Another representation was handed over by Hindu Ekata Manch demanding the release of T Raja Singh as well as providing him with Z plus security immediately.

Phaltan : A memorandum with the same demands was handed over by devout Hindus from Ambajogai (District Beed), Phaltan (District Satara), Latur, Tuljapur (District Dharashiv), while Mr. Madhusudan Ladda, Mr. and Mrs. Jaiswal to the administration at Parali Vaidyanath.