‘Comedian’ Vir Das who is infamous for his anti-India propaganda through his shows on tours abroad is finding it difficult to fix a spot for his show in Gujarat. The people of Gujarat have launched protests against the controversial stage comedian and his shows on the Gujarat tour are getting cancelled one after the other. 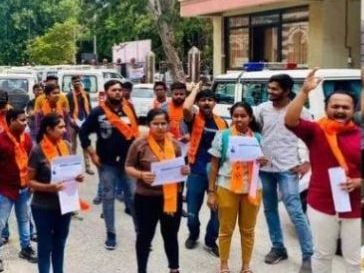 His shows were organised in four cities of the state including Vapi. The ABVP and other Hindu organisations strongly opposed these shows, leading to cancellations of some of the shows even as demands for cancellations of others have started appearing.

Vir Das’s show scheduled for 15th June 2022 in Vapi has been canceled. Even in Vadodara, the Akhil Bharatiya Vidyarthi Parishad has asked to cancel the show to be held on June 17. On the other hand, in Surat too, the ABVP has warned of taking strict action against anti-national activities at the event.

In Vadodara, the ABVP submitted a memorandum to the collector, municipal commissioner, and the commissioner of police demanding the cancellation of comedian Vir Das’ show on June 17. If the show is not canceled, ABVP will hold fierce protests in Vadodara, they said.

Speaking exclusively to OpIndia in this regard, ABVP Vadodara city in-charge Vraj Bhatt said, “Vir Das has made anti-India remarks in his shows in the past. Now, his show is being organized in Vadodara. Making derogatory comments on Hindu temples and speaking against India in the name of comedy to get cheap publicity is not welcome here. The Akhil Bharatiya Vidyarthi Parishad has demanded that the show be cancelled. We have submitted a memorandum to the collector, police commissioner, and municipal commissioner in this regard. If this show is not cancelled, then we will take the path of protests and agitation.”

According to the Vadodara police sources, the matter has been further investigated and the organisers are also being contacted after the request for its cancellation was submitted by the ABVP. If any such program hurting the sentiments of the people is organised in the city, the police will take necessary steps in order to prohibit this program, considering the communal tension already prevailing in the country.

Vishwa Hindu Parishad members submitted a similar memorandum to Vapi administration officials following which the Vir Das show was cancelled. On Wednesday 15th June 2022, VHP submitted a memorandum to the Valsad district collector to cancel the comedian’s program planned to be held in Vapi. The Vishwa Hindu Parishad demanded the cancellation of the show, saying that the comedian’s program, which may include anti-national remarks and jokes about deities, could spoil the harmony not only in Vapi but in the Valsad district as well.

Vir Das’s Vapi show has been called off after intervention by the VHP. Speaking to OpIndia, the management of the hall in Vapi where the event was scheduled to be held has also confirmed the same.

In Surat, the Akhil Bharatiya Vidyarthi Parishad members have raised their voices against the Vir Das show. Speaking to OpIndia, ABVP leader Himalayasinh Zala said, “If anti-Hindu or anti-India activities are found happening in any way in the program, the ABVP, as well as other Hindu organizations, will take legal action and the insult to the country will not be tolerated. In Surat, a program of Vir Das has been organized on 16th June.”

However, after the Vapi show scheduled for 15th June was cancelled, Vir Das tweeted to inform his followers that he has probably caught the Covid infection and therefore he will not be doing shows in Gujarat anytime soon. He wrote, “Gujarat. Woke up showing symptoms, now going to get RTPCR tested. The team is currently working on new dates for Gujarat in a few weeks whenever the venues are available. Your tickets will be refunded. Sorry, Gujarat! I hope you’ll come back on the new dates.”

Gujarat. Woke up showing symptoms, now going to get RTPCR tested. Team is currently working on new dates for the Gujarat in a few weeks whenever the venues are available. Your tickets will be refunded. Sorry Gujarat! I hope you’ll come back on the new dates. pic.twitter.com/YKgvnfA3en

It should be noted that comedian Vir Das was embroiled in a controversy in November 2021, when, during a show in the US, he made derogatory comments against India and against Hindus. He had said, “I come from an India where women are worshipped in the morning and gang-raped at night.” He had also mocked the saffron colour and called the Hindus intolerant.