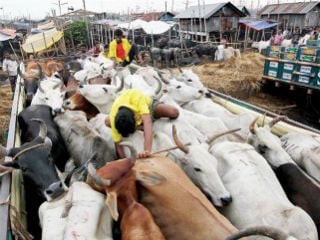 A ‘Hindu Mahapanchayat’ in Sangel village in Haryana’s Nuh district on Sunday demanded the setting up of a special fast-track court to hear cases of cow smuggling.

Participants of the ‘mahapanchayat’ (grand assembly), including members of the Vishva Hindu Parishad, Bajrang Dal and the Gau Raksha Dal, also appealed to the BJP-led State government to put an end to the menace of cow smuggling and slaughter in Mewat within a month.

They demanded that all cases of cattle smuggling be tried in a special fast-track court.

They also demanded the attachment and auction of properties of those engaged in cow smuggling and slaughter.

The ‘mahapanchayat’ was called in response to Congress MLA from the Ferozpur Jhirka constituency Mamman Khan’s remarks against “gau rakshaks” (cow vigilantes).

In a charter of demands handed over to BJP MLA from the Sohna constituency Sanjay Singh, the ‘mahapanchayat’ demanded the quashing of all FIRs against cow vigilantes.

“Cattle smugglers should be dealt with an iron hand. All smugglers should be tried in a special fast-track court and punished. All properties they made through cow slaughter should be auctioned and the money distributed to ‘gaushalas’ and ‘gau rakshaks’ to protect cows,” reads the charter of demands.