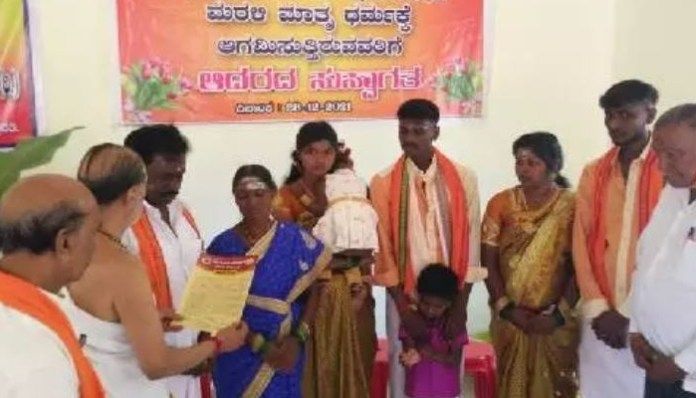 On Sunday, nine members of a Christian household re-converted to Hinduism. At an event at the Rama Bhajan Mandir in Jannapur, VHP and Bajrang Dal members took the initiative to convert them to Hinduism as part of ‘Gharwapsi.’ The development comes days after the Karnataka Government passed the Anti-Conversion Bill in the Legislative Assembly that provided for jail terms for those engaging in mass religious conversion.

Ghar Wapsi: Nine members of a Christian family returned back to Hinduism in Bhadravathi, Karnataka in the presence of VHP and Bajrang Dal members at Sri Ramabhajana Mandir pic.twitter.com/zrYxtcVYdV

Jayasheelan, his wife Jayamma, their sons Prabhakaran and Prakash, and their daughters-in-law Lalita Prabhakaran and Shwetha Prakash, all of Antaragange, are amongst those who have re-converted. Elumalai, Jayasheelan’s father, turned to Christianity 35 years ago but the family had continued to practice the Hindu religion.

Rajavan Vadivelu, a Bajrang Dal leader from Shivamogga and one of the organizers, said that more families are wanting to return to the folds of Hinduism.”These families were converted to Christianity many years back, and they wanted to return to Hinduism. But they had some kind of fear about the society accepting them and what the Christian community might think of them. So, we were in touch with them for the past six months and talked to them following which they were re-converted to Hinduism on Sunday. There are around 100 people who wish to reconvert, we are in touch with them and they will also return to Hinduism very soon. We will organize a grand event for their conversion,” said the BD leader.

Reconverting Hindus the only option left for Hindus, says BJP leader Tejasvi Saurya in an event in Karnataka

Speaking at an event in Karnataka’s Udupi on December 25, the Bharatiya Janata Party (BJP) leader and Bangalore South MP Tejasvi Surya had said that, “The only option left for the Hindus is to re-convert all people who have gone out of Hindu fold. This does not come to us naturally but today we must evolve. This metamorphosis must come in our DNA.”

At a program held in Udupi Sri Krishna Mutt two days ago, I spoke on the subject of ‘Hindu Revival in Bharat’.

Certain statements from my speech has regrettably created an avoidable controversy. I therefore unconditionally withdraw the statements.

The BJP leader’s remark snowballed into a major controversy following which he retracted it. “At a program held in Udupi Sri Krishna Mutt two days ago, I spoke on the subject of ‘Hindu Revival in Bharat’. Certain statements from my speech have regrettably created an avoidable controversy. I therefore unconditionally withdraw the statements”, Tejasvi Surya Tweeted.

In October this year, Karnataka’s BJP MLA Gulihatty D Shekhar had initiated the campaign to bring those who were converted into Christianity back into the Hindu fold. Talking about the systematic process these missionaries follow to forcefully bring people into the folds of Christianity, the MLA had revealed that his own mother was influenced and converted to Christianity by the missionaries. Gulihatti Shekhar had stated that she has been told by the missionaries not to apply Kumkum or Tilak on her forehead. So much is the extent of brainwashing and influence that his mother now does not want to even look at the idols of Hindu Gods and Goddesses, the MLA had said then.