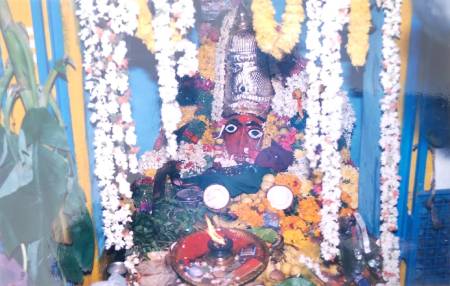 Bengaluru (Karnataka) : Hindu organisations staged agitation against the railway officials who came to demolish the Shri Chamundeshwari Devasthan, located at a distance of 200 meters from the cantonment railway station in Vasanth Nagar. After that, the railway officials assured that the Temple will not be demolished. HJS spokesperson Shri. Mohan Gowda, social worker Mrs Mangala Gauri, Shri. Krishnamurti from the Devasthan, Bajrang Dal’s Shri. Punit Kumar, Shri. Suresh Jain from Hindu Mahasabha and a large number of devotees were protesting.

At around 11 a.m. on, devout Hindus and Hindu organisations opposed railway officials, railway Police and local Police who had arrived at the Temple.

Shri. Mohan Gowda said that the temple was 50-years-old. Railway officials are its trustees.  Daily Pooja is performed in the Temple. In the blueprint of the land map, this place is marked as ‘Land of Devasthan’. The Temple is having an official electricity connection. There are some other official documents; so the Temple should not be demolished under any circumstances. We strongly oppose the demolition attempt. The Temple should be protected. We will fight a legal battle to save the Temple.

It may be noted that this property was donated by the Keladi Kings to the Neelakanth Deshikendra Mutt pic.twitter.com/bU812LawBv

It was reported by the Hindus present that this place was earlier given to Nilkanth Deshi Kendra Mutt by the kings of Keladi. There are documents regarding it. For the last 50 years, the ‘Navratri’ festival is celebrated and every ‘Amavasya’ (New moon day) food is offered to everyone in the Temple. The railway department had permitted to build a Temple there. The Temple does not cause any hindrance to the people, roads and railways. It was, therefore, demanded that it be declared legal.