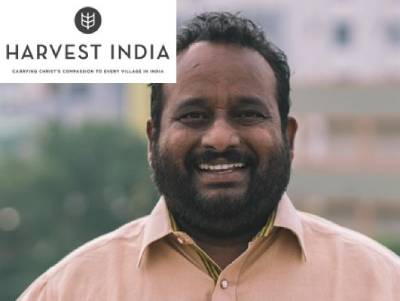 The organization was in the news after NGO watchdog Legal Rights Protection Forum (LRPF) exposed its activities in violation of FCRA rules and released videos of its chief functionary Suresh Kumar indulging in proselytization activities.

Reportedly, Harvest India has more than 1500 ‘community centres’ functioning across the country for proselytizing purposes. In addition to this, there are over 1500 to 2000 pastors working for the organization engaged in conversion activities.

The NGO also conducts ‘Crusade’ events to induct new members to Christianity and train them as preachers. Kumar with his wife runs a Church named King’s Temple and several Bible colleges.

The LRPF recently, in a letter to MHA had sought action against Harvest India and Kattera Suresh Kumar, for collecting foreign funds through fraudulent misrepresentation. Harvest India’s foreign contributions between 2017-18 and 2019-20 had totalled around Rs 19.6 crore which were allegedly being used for missionary activities.

In its complaint, the LRPF had raised queries over the organization utilizing funds for paying salaries to pastors and church maintenance.

Reports suggest that several members of the organization had also violated the Indian visa rules and visited India to participate in proselytizing activities.

Bishop Kattera Suresh Kumar has also been accused of misusing the benefits meant for Scheduled Castes. Early this month, LRPF and the SC-ST Rights Forum had written to the National Commission for Scheduled Castes seeking action against Kumar for holding a Scheduled Caste certificate to avail reservation benefits despite being a Christian Bishop.

Lodged complaint with FCRA Division of MHA against Mr. Kattera Suresh Kumar, Hindu (as per records) for fraudulently misrepresenting himself as Christian Bishop, running an evangelical NGO 'Harvest India' & collecting millions of $ from citizens of USA/UK/other countries. https://t.co/3tMcwYJn9q

Suresh Kumar in an anti-Hindu speech delivered at Mission Conference 2018 held at Biola University in the US, was heard saying, “Right now, we are under Hindu rule. Our Prime Minister is a bad guy. He doesn’t want any Christians in India. He wants to make India a Hindu country. So many pastors killed in the last 5 years. Many missionaries were sent back.”

It's a Black day for SCs of the country and opens pandora's box for similar claims pic.twitter.com/NO96gFSUQv

In a bid to manipulate voters, Kumar had said further, “There is unrest, turmoil. Pastors are dying, Churches are burning. The government is not doing anything. We do not know what is going to happen tomorrow to Christianity in India, to Church in India but I am believing a powerful God on our side. Next year we have an election, please pray. I don’t want this party to come back. This guy is doing so much bad for Christianity”.

Harvest India is the tenth organization to face the axe this year. Prior to this, the FCRA licenses of evangelical organizations such as People’s Organisation of Empowerment of Tribals and Heavenly Grace Ministries, Russ Foundation and Commonwealth Human Rights Initiative, an NGO that is said to have received funds from George Soros’s Open Society Foundation were suspended by the MHA.