Mumbai : An advertisement for ‘Mangalam Kapur’ is shown on the Colors entertainment channel. The advertisement shows the personification of Shriram which has hurt the religious sentiments of billions of Hindus. This advertisement should be withdrawn and an apology should be rendered to Hindus, which is a demand made in this context. 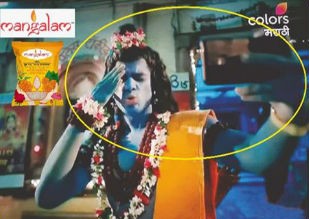 This ad has been posted on ‘YouTube’ by Ryan Mendonca in which a young man is shown in the attire of Prabhu Shriram. He sees his mother on his cell phone when he suddenly remembers that his mother had asked him to get camphor. This young man dressed as Prabhu Shriram then goes to a shop and asks for camphor. The owner of the shop is doing ‘puja’ at that time and his servant gives some ordinary camphor to the buyer. When the shopkeeper sees him, he goes to the buyer and thinking that Prabhu Shriram has actually come to his shop, he throws away the camphor given by his servant and takes out a box of Mangalam Kapur from his vault and gives the same to the person dressed as Shriram; paying obeisance to him.

Devout Hindus are registering their protest on the following contacts in lawful manner !