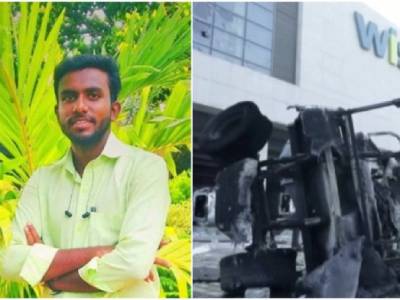 The Karnataka police have arrested a local president of Students’ Federation of India (SFI) – a student body of Communist Party of India in connection with the violence that took place at the Wistron’s iPhone manufacturing plant in Kolar on early Saturday morning.

According to the reports, ‘Comrade Srikanth’, who is a taluk president of SFI in Kolar, was detained by the Kolar police in connection with vandalism and causing destruction of a mobile manufacturing plant in Narasapura, Kolar.

Reportedly, the employees of Wistron and SFI had planned to hold a protest outside Kolar Collector Sathyabhama’s office at 11 am on December 12. The police officials said that Srikanth allegedly curated the WhatsApp message, calling for the protest that was later circulated widely among employees.

The Kolar Rural Police said that Srikanth instigated several SFI activists, who allegedly entered Wistron’s premises on the morning of December 12, and actively participated in the vandalism that happened in the plant.

“Srikanth was arrested for instigating the violence and also bringing in non-employees into the plant which was vandalised,” the police said.

Interestingly, the SFI leader’s arrest comes after Communist party-affiliated trade unions defended the attacks and claimed that they were protesting against the non-payment of salaries. Krishna Siddhi, who is a member of the All India Trade Union Congress of the Communist Party of India, had said that this issue was regarding the extended shifts and the company was not paying salaries for the overtime.

Contrary to the claims of Communist-affiliated trade unions, the Labour department of Karnataka had asserted that the organisation has been regularly paying salaries to its employees and there was only a 4-day delay this month due to a software bug.

Chinese propagandist threatens other companies moving from China to India

Just days after employees and Communist-affiliated trade unions vandalised the Apple’s contract manufacturer Wistron India’s plant in Kolar, Karnataka, fingers were pointed towards China over its alleged involvement in creating trouble against firms that are shifting business out of the country.

In what seems to also be a threat to firms for leaving China to set up factories in countries like India, Qingqing Chen – a chief reporter of the Communist Party of China’s Global Times, had said that the destruction of Wistron’s plant in India was a potential risk for manufacturers who are moving their production lines out of China.

The propagandist of China’s Communist Party, subtly threatened the other partners of Apple Inc such as Foxconn and asked whether these companies now regret about moving their production facilities to India. Chen basically hinted that companies that move their production lines out if China may face such vandalism and loss to business.