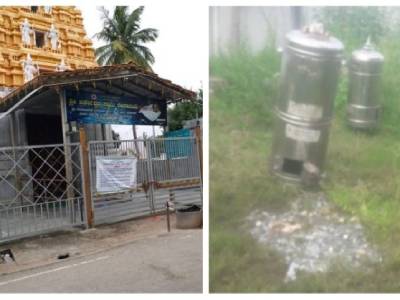 In a horrific incident, three priests of Arkeshwara temple in Mandya, Karnataka were brutally killed by unknown miscreants on Thursday.

Police said the bodies of Ganesh (55) Prakash (58) and Anand (40) were lying in a pool of blood in the temple premises situated in Guttalu on the outskirts of Mandya town. The miscreants had brutally stabbed the three priests, smashed their heads with boulders and decamped with currency notes in the temple hundi (donation box), leaving the coins behind. The miscreants had allegedly also ransacked the sanctum sanctorum of the temple in search of valuables.

The three priests, who also worked as the caretakers and lived on the temple premises, were asleep when the miscreants broke into the temple, the police said.

The horrific incident came to the fore when villagers went inside the temple early on Friday morning after finding the main door ajar. After they found the priests brutally hacked to death, lying in a pool of blood in the temple premises, they informed the police.

All senior police officials, including the Inspector General of police, reached the spot and initiated an investigation into the case. Forensic teams and sniffer dogs were also brought in to investigate the crime scene.

Karnataka Chief Minister B S Yediyurappa has offered condolences the death of the priests and announced an exgratia of Rs 5 lakh next to the kin of each of the deceased. The CM said: “It is very disturbing to learn that the priests of the Arakeshwara temple in Mandya Ganesh, Prakash and Anand have been murdered by the burglars. A compensation of Rs 5 lakh per family of slain temple priests will be given. Immediate legal action will be initiated against the guilty.”