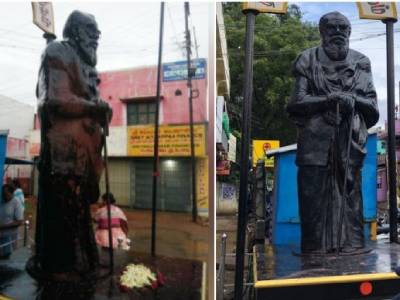 As per reports, The Coimbatore city police on Tuesday evening invoked the National Security Act (NSA) against the 21-year-old Bharat Sena member who was arrested in connection with the ‘desecration’ of Periyar’s statue at Sundarapuram on July 17.

According to the city police, M Arun Krishnan of Podanur, the south district organiser of Bharat Sena, splashed saffron paint on Periyar’s statue at Sundarapuram in the wee hours of July 17. He surrendered to police later that day and was arrested by Kuniyamuthur police under Sections 153 (wantedly giving provocation with intent to cause riot), 153A (promoting enmity between different groups) and 504 (intentional insult with intent to provoke breach of the peace) of the Indian Penal Code. He has been lodged at Coimbatore Central Prison.

Kuniyamuthur Police had recommended to the City Police Commissioner Sumit Sharan that he be detained under the NSA for creating public disturbance and spreading communal disharmony. Based on the recommendation, the Commissioner issued orders doing so. The copy of the order was served to Arun Krishnan on Tuesday evening.

As per Hindu Makkal Katchi, a Hindu organisation in Tamil Nadu, Arun has been granted bail but still he is booked under NSA.

Arun has been granted bail, but NSA is still on him.

Hindu Makkal Katchi is also providing legal aid to Arun and helping him to get a job.

Few companies have contacted us, for a job for Arun.

We will work towards securing his future, and guide him in proper legal Hindu activism. pic.twitter.com/aYOy7fBDWE

It must be noted that jihadi mob had gone on rampage during its protests against Viswaroopam movie, but even after so much damage to national property, NSA was not invoked against jihadi perpertators. Instead of taking strong action against jihadis, the said movie was banned in Tamil Nadu.

So many Hindu leaders have been murdered by nexus of jihadi and anti-Hindu forces in Tamil Nadu, but NSA was not invoked against any of the accused persons.

But Govt has invoked NSA against a person who painted Periyar’s statue with saffron paint.

From breaking Murthis to Ravana Leela: Periyar’s long history of hatred towards Shri Rama and Sita

An article from OpIndia has given examples of how Periyar hated Hindu Dharma and Hindu gods.

Comment by Rajnikanth on Periyar, where he spoke of the manner in which the Dravidanist icon had insulted Shri Rama and Sita Mata, has attracted intense protests and criticism from expected quarters.

A complaint has been filed against the superstar but he has refused to apologize for the comments he made. The reaction from Dravidianists is perplexing as Periyar himself was renowned for his iconoclasm. In this report, we shall briefly look at Periyar’s history with deliberate insults towards the Hindu faith and the legacy he has left behind.

In 1953, Periyar organized agitations for the desecration of Ganesha idols. He had elaborated extensively on the motivations behind the breaking of the idols. He had said in a speech in 1953, “We have to eradicate the gods who are responsible for the institution which portrays us as sudras, people of low birth, and some others as Brahmins of high birth. While the former go on toiling, without any education, whereas the latter can remain without exerting themselves. We have to break the idols of these gods. I start with Ganesa because it is he who is worshipped before undertaking any task.”

Thousands of idols were broken on the chosen day of the agitation, which also happened to be Gautama  Buddha’s birthday. A case was filed against him which was later dismissed by the Courts.

On the 1st of August, Periyar was poised to lead his followers to the Marina in burning pictures of Shri Rama. He was implored by saner heads in the state to not go ahead with such madness. However, consumed by zealotry, he did not pay heed to any such call. In his mind, the Ramayana was a tale of war between Aryans and Dravidians where the less worthy Aryans prevailed over the righteous Dravidians. Quite obviously, Periyar’s interpretation of events had no real basis in reality.

On the day of the protest, Periyar was arrested by the Police but his followers proceeded with the madness at the Marina. Most people went home after the Police brandished their lathis. Approximately 890 people were arrested either before or during the event. Periyar was released after two and a half hours but he declined to continue the protest following his release.

Tamil Nadu’s first Ravana Leela was organized in 1974, a year after Periyar’s death. The event was organized at the headquarters of the Dravida Kazhagam under the leadership of Maniyammai, Periyar’s wife who was about four decades younger to him. It was in accordance with Periyar’s wishes who had mentioned in his personal notes before his death in 1973 that a Ravana Leela had to be conducted in Tamil Nadu every year in response to Ram Leela.

Later in 1974, letters were written to then Prime Minister Indira Gandhi asking her to stop the Ram Leela events in the state. “Your participation in the Ramlila burning the effigy of the great Dravidian hero Ravanan is against all canons of secularism and highly provoking and insulting to millions of Davidians hence requesting you to desist from this dastardly act. Otherwise, we Dravidians would be burning the effigies of Rama and you, on mass level throughout the length and breadth of Tamil Nadu,” said the letter written by Maniyammai.

Indira Gandhi said in her reply, “Ramayana is one of the great stories of the world. Over the years, countless Indian children, including the distinguished founder of your party, have been named after Rama. There is no racial connotation whatever in the Ramlila celebrations in North India. Some modern scholars on the Ramayana even question the traditionally accepted geographical identification of the places in the epic. Any attempt to politicize the significance of these celebrations is unfortunate. The energy of our people should be mobilized for the removal of economic injustice and people’s hardships and not spent on issues that arouse sectarian passions. I would urge you to give up the course of action at which you have hinted.”

Indira Gandhi then proceeded to participate in the Ram Leela event in Delhi as planned. And Periyarists went ahead with the Ravana Leela of their own.

4. Periyar’s lies about the Ramayana

Over the years, Periyar has spread numerous canards about the Ramayana. All his lies were directed towards slandering the Maryada Purshottam. His lies ranged from accusing Shri Rama of being casteist to claiming that he killed and mutilated women. According to him, the Ramayana and Mahabharata were written by ‘cunning Aryans’ to erase the ‘Dravidian identity’. If Periyar were to be believed, Rama was part of a conspiracy to deny the throne to Bharata, who, according to Periyar, was Dasaratha’s rightful heir.