The Centre should enact a law for the protection of religious and historic sites and  monuments ! – Anil Dhir, National Secretary, Bharat Raksha Manch, Odisha 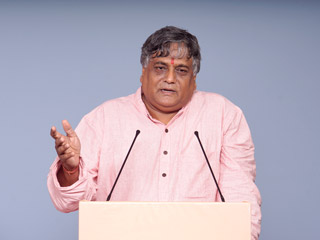 Name of the district : The Odisha government destroyed several ancient shrines in the name of development. This led to the loss of numerous ancient temples and precious religious texts. Several antique idols were stolen. To protest against this, the local Hindus filed a legal petition, but the court refused to interfere in the matter. The treasure trove of the cultural heritage of Hindus is being depleted due to rampant destruction of shrines and temples. To prevent this, the Centre should enact a law to preserve our temples, said Shri Anil Dhir, National Secretary, Bharat Raksha Manch (Odisha). He was speaking at the Ninth All India Hindu Rashtra Convention jointly organised by Hindu Janajagruti Samiti and Sanatan Sanstha, held online. The Convention is being streamed live from Hindu Janajagruti Samiti’s official YouTube channel ‘Hindujagruti’ and the Facebook Page, ‘Hindu Adhiveshan’, and was viewed live by an audience of over 54 thousand whereas the subject reached over 2 lakh individuals.

At the occasion, Shri. T N Murari, State Chief of Shivsena (Telangana) said, “Dharma will survive only if the cultural heritage of Hindus is preserved. Therefore, the Modi government should form a religious council for the protection of temples.” While speaking at the Convention, Shri. Sanjay Sharma of Eternal Hindu Foundation said, “Temples should become centres of social awareness. If awareness pertaining to the Dharma and government policies such as CAA and NRC is spread from temples, it will help strengthen the Swadeshi movement. This will also help make headway in the direction of Prime Minister Modi’s Atmanirbhar Bharat.” At the occasion, Shri. Gajendra Bhargav, President of Vanarsena (Rajasthan), said, “In addition to the internal management of the temples, the external management is equally important. A large number of temple premises have become hubs of encroachment in the form of shops. Hindus should spare a thought to this issue. If the Hindu youth is taught the importance of our cultural heritage, they will unite for the cause of temple protection.”

Dignitaries discuss the various types of attacks on temples, in a webinar on ‘Temple Protection’ !

While participating in the webinar, Smt. Uma Anandan, Vice President, Temple Worshippers Society (Tamil Nadu) said, “The rules for all Churches and Mosques across the world are standard; however, temples are imposed a different set of rules. The Father looks after the management of the Church and a Maulavi is responsible for that of the Mosque. Similarly, the management of temples should be handed over to the devotees.” While speaking at the webinar, Shri. B K S R Iyengar, Historian from Andhra Pradesh, said, “The government should declare centuries-old temples, shrines and religious and historic sites as ‘Cultural Heritage’. Additionally, experts in the field of religious architecture should be consulted while restoring ancient temples.” Shri. Sunil Ghanwat, Maharashtra and Chhatisgarh State Organiser, Hindu Janajagruti Samiti, said, “The gross corruption happening in temple committees is a result of government take-over of temples. To prevent this, it is important that temple trustees and devout Hindus come forward and run a national campaign against this practice.” At the occasion, citing the example of Ram Mandir, Shri. Ghanwat appealed people to participate in the “Rashtriya Mandir-Sanskruti Raksha Abhiyaan” for the release of 40,000 temples across the country, including Kashi and Mathura. Shri. Virendra Ichalkaranjikar, National President of Hindu Vidhidnya Parishad said, “The self-proclaimed ‘secular’ government takes over the control of only Hindu temples; and not Churches or Mosques. The temple funds are used for other religions. Hindus should form pressure groups to counter these double standards of the government. 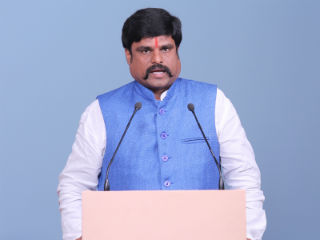 Ponda (Goa), 6th August – Temples’ assets are being looted through ‘Endowment Act’ in the States of Andhra Pradesh and Telangana. Millions of acres of land has been lost and some land has been used by the Governments for their work. Politicians have a hold over temple committees. The Union Government should therefore, pass a law for protection of temple-lands by setting up a Central autonomous ‘Dharmik Parishad’. ‘Dharmacharyas’, ‘Mathadhipatis’, representatives of organizations working for protection of Dharma, scholars of ‘Dharma-shaastra’, temple-priests etc can be inducted as members of this Parishad so that State Governments’ interference would be stopped in temple management. The above suggestion was given by Shri. T. N. Murari, the State-Chief of Shiv Sena for Telangana while addressing the ninth ‘Online’ All India Hindu Rashtra Convention on 6th August 2020 on the topic of ‘Mandir Rakshan Abhiyan’.

Shri. Murari said further, “The Government has taken over management of 32000 temples under the guise of ‘Endowment Act’. Not even simple rituals like offering ‘dhoop-deep-naivedyam’ etc are performed in 27000 temples out of them. Maximum raids have been conducted by anti-corruption squads on this ‘Endowment’ Department. This Department tries to avoid giving any information even under ‘Right to Information (RTI)’ by giving some excuses. Hindu devotees make offerings in the temples with so much devotion; but the funds are not used for welfare of Hindus. Temples used to be the Centres of social living in ancient times; but foreign invasions attacked Hindu culture by destroying temples. It is unfortunate that during the post-independence period also, the Governments are taking over temple management and looting temple money.”

There are several temples in India around which there are colonies of non-Hindus or their structures. Temple management committees pay attention only to internal management; but don’t pay attention to the condition existing around temples. Every person has faith in a certain Deity or certain temple. Youth members should therefore, be associated with temples’ management. Gymnasium can be started in Hanuman temples so that youth members would get associated with such temples. It will help to create love and loyalty towards Dharma so also patriotism in youth; then no invader would dare to look at temples with an evil eye.

Our ancient Mutts and temples are being destroyed under the pretext of development of religious places. Odisha Government demolished several ancient mutts and temples under its project of preparing a way for circumambulation around Jagannath-puri Temple as has been built at the Golden Temple. It resulted in destruction of hundreds of years old cultural, religious and historical legacy. What is happening there is not development but it is only beautification of the place. It is like converting a place of pilgrimage into a tourists’ place. It should be made compulsory to set up a local committee and obtain permission of local residents before taking up any project at religious places, stated Shri. Anil Dhir, the national Secretary of ‘Bharat Raksha Manch’ on 6th August while speaking on the topic of protection of temples during the on-line ninth all-India Hindu Rashtra Convention presently going on. He mainly spoke on the topic of the government’s conspiracy to grab lands belonging to mutts and temples at Jagannathpuri.

Give your two hours for temples and offer your skills and knowledge ! – Shri. Sanjay Sharma, ‘Eternal Hindu Foundation’, New Delhi

“Temples are not just the centres of Hindus’ religious faith but they are the symbols of social civility. Hindus’ history and culture is connected to temples; therefore, give your 2 hours for temples as it is one of the activities of nation building. We have undertaken this drive called ‘Rashtra-nirmaan ke Kaam, do ghante Mandir ke Naam (give 2 hours to temples for activities of nation building) under the aegis of ‘Eternal Hindu Foundation’. Under this drive, you can give your two hours in a week or in a month for temples. You can go to a temple in your area and offer your skill. If people from  different social fields like farmers, nurses, teachers, soldiers join this drive and share their knowledge and skill for the benefit of others, it will create awareness amongst people and temples would become centres of social life leading to self-reliance. It is our collective duty to take out time for temples.”