Muhammed Faiz Khan should respect the sentiments of Hindus and abandon the decision to bring soil in Ayodhya ! – Hindu Janajagruti Samiti 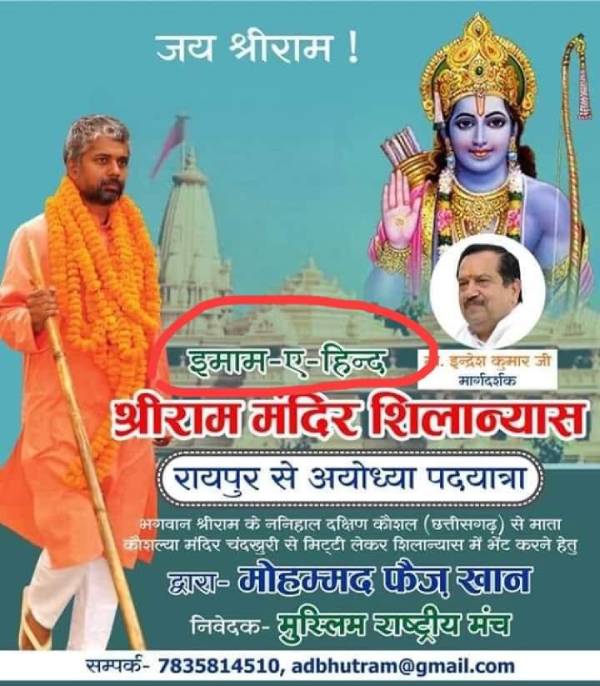 The construction of the grand temple of Prabhu Shriram will begin on 5th August at Shriram Janmabhoomi Ayodhya after the sacrifice of life by several Hindus and 500-year-long wait. This moment is of tremendous joy for the entire Hindu community. Had Indian Muslims extended cooperation for building the Ram Temple earlier by giving up the symbols of invader Babar, this conflict could have been avoided. On the contrary, the Muslim community took up the role of opposition in this case. Even then, the temple is being built by following the democratic process after the verdict of the Supreme Court. Now a new dispute is created due to the insistence of an individual from the Muslim community to bring soil for the foundation stone of Shriram Temple. It is quite natural for Hindus to have an adverse opinion about this deed due to the opposition displayed by Muslims to Ram Temple so far. Even if it is agreed that the sentiments of Muhammed Faiz Khan are pious, he is a devotee of Shriram, he should first respect the religious sentiments of the Hindu community. Therefore, Muhammed Faiz Khan should ensure that no obstacle is created in Bhoomipujan of Shriram Temple at Shriram Janmabhoomi and avoid any dispute due to him. Therefore, Faiz Khan should abandon the idea of bringing soil for Bhumipoojan, appealed the National Spokesperson of Hindu Janajagruti Samiti Ramesh Shinde.

To call Prabhu Shriram ‘Imam-e-Hind’ is His insult !

In the post uploaded by Muhammed Faiz Khan on social media, he has referred Prabhu Shriram as ‘Imam-e-Hind’. Imam means those who recite Namaz, accept Islam and abide as per Islam. Prabhu Shriram neither recited Namaz nor was a follower of Islam. He Incarnated in Tretayug, lakhs of years ago before the advent of Islam. Therefore, whatever may be the meaning of the word Imam in Islam, to use the word for Prabhu Shriram is wrong historically, culturally and from a religious viewpoint. On the contrary, Faiz Khan by referring Prabhu Shriram as Imam of that religion, whose followers invaded and demolished thousands of temples in India, including hundreds in Ayodhya and does not subscribe to Idolatry is an insult of Prabhu Shriram. Therefore, Faiz Khan should tender a public apology to the entire Hindu community, devotees of Shriram, demanded Mr. Ramesh Shinde.