HinduJagruti.org – Educating, awakening and uniting Hindus across the world for the Hindu Rashtra! 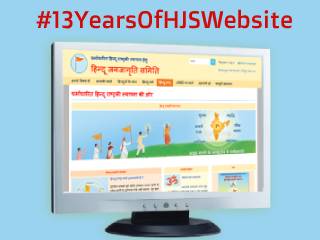 The Hindu Janajagruti Samiti was established with the noble goal of establishing the Hindu Rashtra and the Samiti’s website, HinduJagruti.org has been instrumental in educating, awakening and uniting Hindus across the world with regards to this goal. The website currently functions in Hindi, English and Marathi. Ashadh Purnima (Gurupurnima 2020) marks the 13th year of the website’s service to Hindu Dharma. On this occasion, we would like to humbly present a birds eye view of the site’s activities.

2. Participation of thousands of devout Hindus from all over the world in HJS activities of ‘Dharmajagruti’ is the outcome of the website – HinduJagruti.org ! : We are witnessing an ever increasing number of Hindus who are inspired by the activities of the Samiti and actively pledging their support to the mission of Hindu unification and awakening of Dharma. On average we receive inquiries from over 500 devout Hindus across the world who wish to contribute their time and energy to the activities of the HJS. This translates into more than 7000 people who are being inspired by the activities of the Samiti which are showcased on the website.  Besides India, devout Hindus from  more than 35 countries like Pakistan, China, Nepal, Bangladesh, Sri Lanka, Singapore, Thailand, Malaysia, Mauritius, Australia, United Kingdom, Germany, USA, Canada, Austria, Sweden, Kenya, New Zealand etc. have showed interest in taking part in HJS’ activities. It is a testimony to the Samiti’s goal of reaching out to every Hindu that these visitors comprise of doctors, engineers, IT experts, advocates, industrialists, journalists, accountants, professors, former army personal, technicians, students etc., many who have already started serving Dharma along with HJS.

A. Activities started during Lock-down period

B. Signature Campaigns over the last year

More than 7000 Hindus and Nationalist signed and emailed the petition to the concerned authorities.

Since the mainstream media largely ignores the plight of the Hindus, HinduJagruti.org is committed to highlight such issues and bring them to the forefront. More than 300 such awareness campaigns on the issues of Nation & Dharma were undertaken by the HJS website. Some are highlighted below

The widespread awareness created by these campaigns were instrumental in uniting the Hindus who raised their voice unitedly and peacefully against the misrepresentation of Hindu Dharma, the mockery of our Gods and the disrespect shown to our Nation and heroes. As a result, many of the offending parties have tendered unconditional apologies for their transgressions while in certain cases Hindus have spontaneously filed cases against the more serious offences. In the latter, we are sure that Dharma will triumph!

A request to you !

As you may already be aware, Hindu Janajagruti Samiti is run by volunteers who have come together due to their love and dedication for the Nation and Dharma. So also, the website HinduJagruti.org has been functioning for the last 13 years solely with the aim of serving the Nation and Dharma. If you wish to contribute to the activities of the website and help it grow, we request you to consider making a donation towards the site’s upkeep and maintenance. If you are unable to make monetary contributions, we request you to share the articles, social media posts with your family and friends and contribute to the awakening of Dharma among Hindus in India and across the world.

We pledge to continue serving Dharma in whatever capacity we have, and we hope the site’s activities will inspire you to do so too !