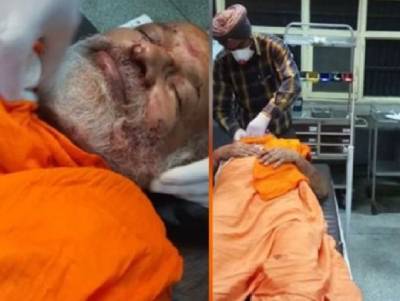 On Friday (24 April), a Hindu Sadhu named Swami Pushpendra Swaroop was attacked and injured by two assailants at his ashram in Hoshiarpur, Punjab. He was resting alone around 10 pm when the duo climbed the wall, entered the ashram, and attacked Swami Pushpendra with sharp-edged weapons.

Two people attacked Swami Pushpendra ji in Punjab Tiday ..Swami ji is attacked with a deadly weapon. Why Sadhus are on target ? What are the intentions and who is behind such criminals ? Kindly look and work for the safety of Sadhus. @HMOIndia @AmitShah @capt_amarinder pic.twitter.com/9QCY2cq0Ng

He was then rushed to a local hospital. The Sadhu informed the police that the unidentified assailants tied his hands and feet, prior to attacking him. The duo also tried to strangle him, before fleeing the crime scene with ₹50,000 and some other items from the Ashram. “I pleaded them to spare my life and take the money instead. But, they continued to injure me”, Swami Puspendra recounted. He was also hit on his head with a weapon that aggravated his injuries.

According to reports, the condition of the seer remains critical.