Result of pressure from the united Hindus !

Bollywood should take a lesson from the ‘Dabangg 3’ case and stop making religious bigotry in movies !

In the upcoming movie ‘Dabangg 3’ ‘Hood Hood Dabangg’, the humiliation of the Hindu saints and Gods created a feeling of distress in Hindu society. It was strongly condemned by many devout Hindu organizations, Akhada Parishad, Sant Samaj and others throughout the country. Hindu Janajagruti Samiti submitted a petition to the Censor Board against the film, however no action was taken. Yesterday, Censor Board officials told the committee delegation that they had removed the offending footage from the film. Today, Salman Khan Films tweeted, “We are removing some scenes from the song ‘Hood Hood Dabangg.” Therefore, the decision was made too late to say ‘come late’. According to Shri Ramesh Shinde, “this decision had to be taken only because of the pressure of the united power of Hindus. If someone hurts the religious sentiments of Hindus and to make films, they will have to face such opposition.” He also thanked devout Hindu organizations including Sant Samaj for their support in the protest.

In one of the songs in ‘Dabangg 3′, Hindu saints were shown dancing with Salman Khan, their jataa left loose on their lap. Some saints were shown playing the guitar. Reacting to this, Salman Khan also made a derogatory remark stating that they were not true saints. In one of the scenes in this song, Shri Krishna, Sriram and Lord Shiva were shown dancing to the song’s tune, blessing Salman Khan. This representation of Hindu Gods and saints disrespected the religious sentiments of the Hindu community. Shri. Ramesh Shinde stated that the film industry should learn from this incident and ensure that there is no religious mockery in its films.

On November 29, the Maharashtra and Chattisgarh branch of a religious organisation, Hindu Janjagruti Samiti, had sent a letter to the Central Board of Film Certification (CBFC) seeking removal of a sequence as “it hurts religious sentiments”.

Protests to intensify if Dabangg 3 derogatory scenes are not expunged ! – HJS

Salman Khan’s ‘Dabangg 3’ humiliates Hindu Sanyasis by showing them dancing in western style. Hindu Janajagruti Samiti, Varkari Sampraday and similar organisations are doing protest campaigns throughout the country for the past 21 days. They demand Censor board and local government to remove the scenes that are insulting. Representatives of Hindu Janajagruti Samiti once again approached Officials of the Censor board in Mumbai on 17th December. Hindu Society will not tolerate insult of Sadhu Sanyasis. And hence, said Shri. Sunil Ghanwat, State Coordinator of HJS Maharashtra and Chhattisgarh that the protest campaigns will be intensified if the denigrating scenes are not expunged before its release on the 20th.

Sunil Ghanwat added that the hindi movie ‘Panipat’ had shown ‘Surajmal Maharaj’, respected amongst Jaat and Rajput in a bad shape. On knowing this the Rajasthan’s additional principal home secretary had given an order to remove 11 min. video clip from the movie. On the same grounds, Maharashtra’s additional principal home secretary should give order to expunge denigrating scenes from Dabangg 3 demands Sunil Ghanwat.

In the movie ‘Dabangg 3’, ‘Hood-hood Dabang-dabang’ has shown Sadhus dancing like westerners and playing guitar. Some of them have been shown throwing their jataa according to the beats songs. Salman Khan has also been shown receiving blessings from the characters in the form of Lord Shiva, Sriram and Krishna. In this way, Hindu Sadhus and deities have been humiliated by showing them dancing and humanizing the deities. Our Sadhu Sanyasis will never tolerate it. We will take to the streets and protest against this film. If one song has so many objectionable scenes, what will the whole movie be like ? And hence, we demand that the movie be edited until Hindus feel that no scene anymore hurts their feelings. Let Censor board hold on the certificate and release of the movie till then. 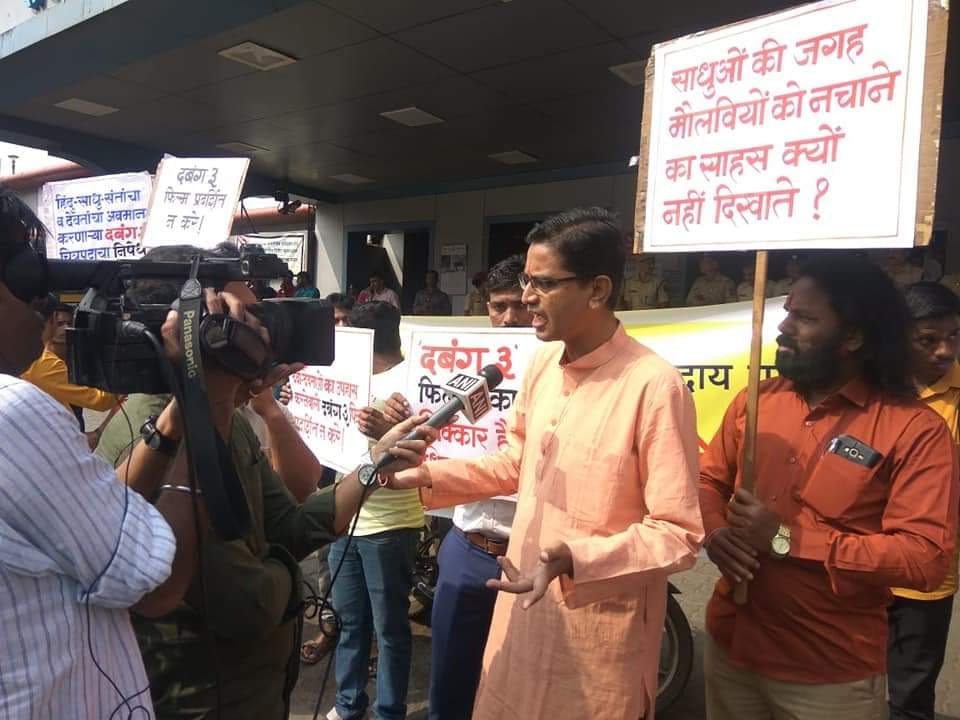 Today, on 8th December, many devout Hindu organisations and Hindu activists came together and protested against upcoming Dabangg 3 movie as it mocks Hindu Sadhus and Saints. They demanded that objectionable scenes from the movie should be removed immediately, else Hindus would boycott the film. Activists from many Hindu organisations, Hindu Rashtra Sena, Bajarang Dal, Shri Shivkarya Pratishthan, Vajradal, Hindu Janajagruti Samiti, Sanatan Sanstha etc. agitated against Dabangg 3. 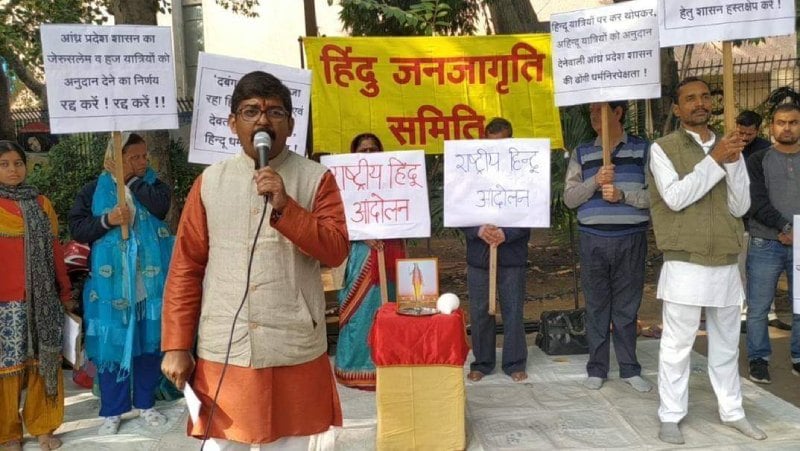 Devout Hindus trend #BoycottDabangg3 as it mocks Sadhus and Saints

#BoycottDabangg3 becomes top trend as it mocks Sadhus and Saints. Devout Hindus are protesting against the movie. They are demanding to refuse the Censor Board certification to Dabangg 3. Below are some tweets from devout Hindus,

Censor Board has become a puppet in the hands of film producers and agitation will be staged if objectionable scenes were not removed ! – Hindu Janajagruti Samiti

We have submitted memorandum to the Censor Board for removal of these scenes; but Censor Board always taken a soft stand under the guise of giving respect to freedom of expression of people and artists. The existing Censor Board has become a puppet in the hands of film producers and there are actually no hopes of its taking any action even in this case; therefore, we have lodged a complaint against this film under Section 295-A for hurting religious sentiments of Hindus. Hindus will take to streets and stage agitations in case the film producers or Censor Board don’t take any action for removal of such scenes, warned Shri. Parag Gokhale of Hindu Janajagruti Samiti (HJS).

Shri. Parag Gokhale of @HinduJagrutiOrg has filed police complaint in Pune against upcoming Dabangg 3 movie as it insults Hindu Sadhus, Saints and deities in its song.

Will Salman Khan, who is showing Sadhus dancing dare to show  Mulla-Maulavi or Father-Bishop dancing in this film ?

‘The trailer of the film ‘Dabangg-3’ produced by ‘Salman Khan Films’ which is going to be released on 20th December 2019 has been aired recently. In the song ‘Hud-Hud-Dabang-Dabang’ in the film, Hindu Sages, Bhagawan Shiv, Shriram and Shrikrushna have been denigrated. Sadhus have been shown dancing with Salman Khan in a hideous and objectionable manner. This has hurted the religious sentiments of Hindus. ‘Will Salman Khan dare to show Mulla-Maulavi or Father-Bishop dancing?’, is the question raised by Mr. Sunil Ghanwat, Rajya Sanghatak of Hindu Janajagruti Samiti for Maharashtra and Jharkhand.

Hindu Janajagruti Samiti has submitted a representation to the Central Board Of Film Certification, in which it has demanded that the Certification to the film should not be given until the scenes hurting the religious sentiments of Hindus are deleted .

In the film, Sages have been depicted as dancing with Salman Khan in a hideous and objectionable manner on the bank of a river. Some Sages are shown playing guitar in a western style. Also, the characters in the form of Bhagawan Shiv, Shriram and Shrikrushn are shown blessing Salman Khan. In this way, the scenes of Sages dancing, Deities being depicted as human beings, etc. are insulting Hindu Sages and Deities. The scenes are just from the trailer and more such denegrating scenes might be there in the entire film. Therefore, the Central Board Of Film Certification should delete the scenes which denigrate Hindus’ seats of faith and Hindu culture from the film ‘Dabangg-3’. Till then, Certification should not be given to the film, demanded Hindu Janajagruti Samiti.

Media Coverage of demand by HJS