Jabalpur (Madhya Pradesh) : Divisive forces in this country are encouraging ‘love jihad’ and playing with Hindus’ sentiments. There are many such problems faced by Hindus. Increasing population of non-Hindus is also a matter of concern; therefore, Hindus should now demand only and only Hindu Rashtra, stated Shri. Upadesh Rana, national ‘Mahamantri’ of ‘Hindu DharmaSena’ while addressing Hindu ‘Dharmasabha’ held by this organization at Jabalpur. Saint Dada Pagalananda, Sadhvi Shiromani, Ramarajacharyaji Maharaj of ‘Akhil Bharatiya Sant Samiti’, Madhya Pradesh and Shri. Yogesh Agrawal, Regional President of ‘Hindu DharmaSena’ shared the dais with him.

Sadhvi Shiromani said that it was necessary to devote time for Dharma rather than only talking about the same. Many youth are working for Dharma with the view of sacrifice which was quite commendable. Bharat would regain her past glory if every citizen made little sacrifice. Shri. Yogesh Agrawal explained how undivided Bharat was divided in different ways. He said, “We seriously need to look at the problem of decreasing population of Hindus.” He made an appeal to Hindus to work for controlling population of non-Hindus, in united manner.

Let us make beginning of Hindu Rashtra from self ! – Anand Jakhotia 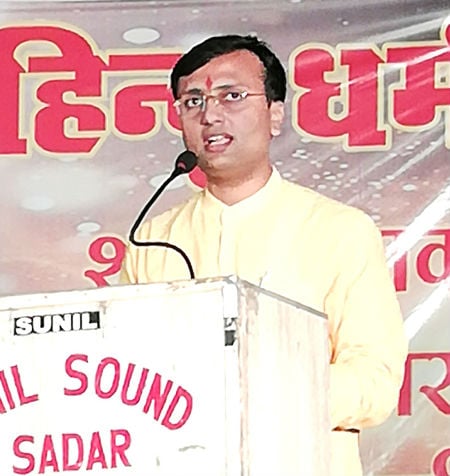 Our Government should provide protection to our languages, Holy Scriptures, Saints, temples, culture, history and traditions; only then Hindu Rashtra would be established. Hindus should first start abiding by Dharma as a first step towards establishing Hindu Dharma. Besides, in national life too, Dharma needs to be brought in for which demand for Hindu Rashtra would have to be made. Israel Government provided protection to local language, religious festivals and traditions while declaring it as a Jew nation. Bharat should learn from such example, stated Shri. Anand Jakhotia of Hindu Janajagruti Samiti.