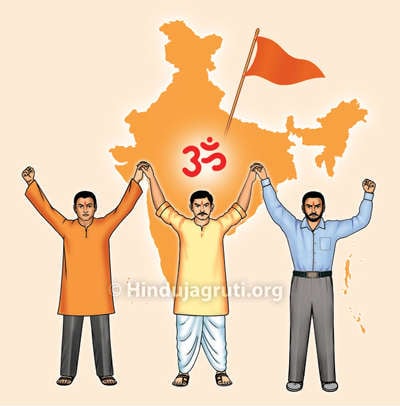 Today activists from Hindu Janajagruti Samiti along with many other Hindu activists asked Hindu community to boycott Red Label tea as its ads are hurting religious sentiments of Hindus. Its advt try to show that Hindus are intolerant and they should give up their ‘Islamophobia’ and remain in peace with ‘Bhaichara’ or ‘Sarva Dharma Sambhav’. Hence Hindu activists expressed their opinions on freedom and called for total boycott not just Red Label, but also all products of its parent company Hindustan Unilever.

Around 9 a.m. , #BoycottRedLabel was in top 20 Indian trends and around 11.15 am it became national top trend on Twitter in India. This prompted many media houses to cover such issues, which included Navbharat Times, India.com, Yahoo News, TV9, News18, NewsX, MyNation and many other prominent news outlets.

Here are some of the excerpts from India.com report :

Manufacturing company Hindustan Unilever is under fire on social media for the latest commercial advertisement of their tea product named Red Label. The brand is one of the most selling tea products in India, however, its latest ad that is centred around the festival of Ganesh Chaturthi has left some people on Twitter fuming.

The ad shows a Hindu man looking out for a Ganesha idol to take home but he steps back and hesitates before buying it when he comes to know that a Muslim man has created it. Twitterati say the ad promotes Islamophobia and shows Hindus in a bad light. Some also criticise the tea brand for being unreal citing that no Hindu customer would react the way the man in the ad does upon knowing that he’s buying something from a Muslim man. A few also feel that the ad-makers should steer clear away from using religion as their subject in ads.

Twitterati have started the hashtag #BoycottRedLabel asking the makers to remove the ad from all the streaming platforms and apologise for hurting religious sentiments. Check out  these tweets:

We appeal @RedLabelChai and @HUL_News to remove ads insulting religious sentiments of Hindus and apologize to Hindu community !

Ram Ram ji ? I liked the adv. earlier as I SAW that a #Muslim respected an idol that Hindus worship. But showing #Hindu Man as not secular is indirect way to show #Islamophobia which is pathetic ? pic.twitter.com/gbLXqRezxM #BoycottRedLabel as they target Hindus ? #PayalRohatgi

After the Holi add by Communal Uniliver we in our home stopped funding to Unilever.
We changed
Redlable 2 Tata
Colgate 2 Vicco
Rin 2 Patanjali
.
.
.
.
.
.

Today i kicked Unilever out of our house.
We together can kick Uniliver out of india#BoycottRedLabel pic.twitter.com/TwYYB4Y4za

During every Hindu festivals, brands come up with the advisements that insult Hindus and it has become a trend to gain popularity. Hindus should unite and protest against such acts. #BoycottRedLabel and all Hindustan Lever products. pic.twitter.com/W5BBqAYBPS